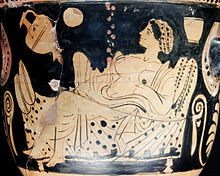 Danaë reclining with Zeus as the shower of gold depicted on a vase 450-425 BC
For other uses, see Danaë (disambiguation).

In Greek mythology, Danaë (Ancient Greek: Δανάη, English translation: "parched"[citation needed]) was a daughter of King Acrisius of Argos and Eurydice of Argos. She was the mother of Perseus by Zeus. She was sometimes credited with founding the city of Ardea in Latium.

Disappointed by his lack of male heirs, Acrisius asked an oracle if this would change. The oracle told him to go to the Earth's end where he would be killed by his daughter's son. She was childless and, meaning to keep her so, he shut her up in a bronze tower or cave. But Zeus came to her in the form of golden rain, and impregnated her. Soon after, their child Perseus was born.

Unwilling to provoke the wrath of the gods by killing his offspring, Acrisius cast Danaë and Perseus into the sea in a wooden chest. The sea was calmed by Poseidon and at the request of Zeus the pair survived. They washed ashore on the island of Seriphos, where they were taken in by Dictys - the brother of King Polydectes - who raised Perseus to manhood.

Later, after Perseus killed Medusa and rescued Andromeda, the oracle's prophecy came true. He started for Argos, but learning of the prophecy instead went to Larissa, where athletic games were being held. By chance, an aging Acrisius was there and Perseus accidentally struck him on the head with his javelin (or discus), fulfilling the prophecy. Too shamed to return to Argos he then gave the kingdom to Megapenthes, son of Proetus (Acrisius's brother) and took over his kingdom of Tiryns, also founding Mycenae and Midea there.

Another version states that, angry that his grandfather tried to kill him and his mother, Perseus returned home and challenged Acrisius in his court. He took out Medusa's head from a sack and turned Acrisius and his court to stone.