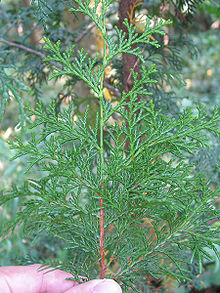 It is a slow-growing tree which grows to 35 m tall with a trunk up to 1 m in diameter. The bark is dark red-brown. The leaves are scale-like, 2-4 mm long, blunt tipped (obtuse), green above, and green below with a white stomatal band at the base of each scale-leaf. The cones are globose, 8-12 mm diameter, with 8-12 scales arranged in opposite pairs. The related Chamaecyparis pisifera (Sawara Cypress) can be readily distinguished in its having pointed tips to the leaves and smaller cones.[2][3]

A similar cypress found on Taiwan is treated by different botanists as either a variety of this species (as Chamaecyparis obtusa var. formosana) or as a separate species Chamaecyparis taiwanensis; it differs in having smaller cones (6-9 mm diameter) with smaller scales, and leaves with a more acute apex.[2][3]

It is grown for its very high quality timber in Japan, where it is used as a material for building palaces, temples, shrines, traditional noh theatres, baths, table tennis blades and masu. The wood is lemon-scented, light pinkish-brown, with a rich, straight grain, and is highly rot-resistant.

For example, Horyuji Temple and Osaka Castle are built from Hinoki wood. The hinoki grown in Kiso, used for building Ise Shrine, are called 御神木 Go-Shin-boku "Tree where god stayed".

It is also a popular ornamental tree in parks and gardens, both in Japan and elsewhere in temperate climates, including western Europe and parts of North America. A large number of cultivars have been selected for garden planting, including dwarf forms, forms with yellow leaves, and forms with congested foliage. It is also often grown as bonsai.

Hinoki (and sugi) pollen is a major cause of hay fever in Japan.

Over 200 cultivars have been selected, varying in size from trees as large as the wild species, down to very slow-growing dwarf plants under 30 cm high. A few of the best known are:[4][5][6]