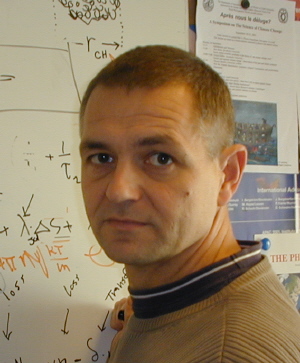 Henrik Svensmark is a at the in who studies the effects of cosmic rays on cloud formation. His work is connected to considerable controversy in the area of the global warming issue. He has highlighted how it conflicts with the theory held by some that the effects of human activity on rising temperatures are more significant than solar activity.

Henrik Svensmark is director of the Centre for Sun-Climate Research at the (DSRI), a part of the Danish National Space Center. He previously headed the sun-climate group at DSRI. He held postdoctoral positions in physics at three other organizations: , , and the .

Svensmark's research downplays the significance to which atmospheric CO2 has affected recent .

Svensmark detailed his theory of Cosmoclimatology in 2007. [cite journal|title=Cosmoclimatology: a new theory emerges|author=Svensmark, Henrik |journal=Astronomy & Geophysics (ISSN: 1366-8781)|vol=48,issue: 1, pages: 18-24 |year=2007|publisher=Blackwell Publishing] , The Center for Sun-Climate Research at the Danish National Space Institute "investigates the connection between solar activity and climatic changes on Earth." [cite web|url=http://www.spacecenter.dk/research/sun-climate/cosmoclimatology/a-brief-summary-on-cosmoclimatology|title=A brief summary of cosmoclimatology|publisher=Danish National Space Center] , [cite web|url=http://www.space.dtu.dk/English/Research/Research_sections/Sun_Climate.aspx|title=Connection between Solar Activity and Climate Changes|publisher=Center for Sun-Climate Research, Danish National Space Institute] . It has numerous publications documenting Cosmoclimatology and reviewing the Influence of Solar Cycles on Earth's Climate. [cite web|url=http://www.spacecenter.dk/research/sun-climate/Scientific%20work%20and%20publications|title=Scientific work and Publications|publisher=Danish National Space Center] , [cite web|url= |title=Influence of Solar Cycles on Earth's Climate|author=Freddy Christiansen, Joanna D. Haigh, & Henrik Lundstedt|publisher=Danish National Space Center|date=2007-09-04] Svensmark and published a book "The Chilling Stars: A New Theory of Climate Change" (2007) describing the Cosmoclimatology theory that "have more effect on the climate than manmade CO2":
*During the last 100 years cosmic rays became scarcer because unusually vigorous action by the Sun batted away many of them. Fewer cosmic rays meant fewer clouds--and a warmer world. [Svensmark, Henrik, "The Chilling Stars: A New Theory of Climate Change", Totem Books, 2007 (ISBN 1-840-46815-7)] The book has been criticised by some scientists for exaggerating the importance of their work [ [http://physicsweb.org/articles/world/20/6/8/1] ] .A documentary film on Henrik Svensmark's theory, "", was presented by MortensenFilm.dk [ [http://www.mortensenfilm.dk/Documentary.html "The Cloud Mystery"] ] early in 2008.

Preliminary experimental verification has been conducted in the SKY Experiment at the Danish National Space Science Center. CERN is preparing comprehensive verification in the CLOUD Project.

To investigate the role of cosmic rays in cloud formation low in the Earth’s atmosphere, the SKY experiment used natural muons (heavy electrons) that can penetrate even to the basement of the National Space Institute in Copenhagen. The hypothesis, verified by the experiment, is that electrons released in the air by the passing muons promote the formation of molecular clusters that are building blocks for cloud condensation nuclei.

Scientists are preparing detailed atmospheric physics experiments to test Svensmark's thesis, building on the Danish findings. , the European Organization for Nuclear Research in Geneva, started a multi-phase project in 2006, including rerunning the Danish experiment. plans to use an accelerator rather than rely on natural cosmic rays. CERN's multinational project will give scientists a permanent facility where they can study the effects of both cosmic rays and charged particles in the Earth's atmosphere.

Mike Lockwood of the UK's and Claus Froehlich of the World Radiation Center in Switzerland published a paper in 2007 which concluded that the increase in mean global temperature observed since 1985 correlates so poorly with solar variability that no type of causal mechanism may be ascribed to it, although they accept that there is "considerable evidence" for solar influence on Earth's pre-industrial climate and to some degree also for climate changes in the first half of the 20th century. [Cite journal
author = Mike Lockwood &
title = Recent oppositely directed trends in solar climate forcings and the global mean surface air temperature
journal =
volume
doi = 10.1098/rspa.2007.1880
year = 2007
volume = 463
pages = 2447]

Svensmark's coauthor Calder responded to the study in an interview with [http://www.londonbookreview.com/index.html LondonBookReview.com] , where he put forth the counterclaim that global temperature has not risen since 1999. [http://www.londonbookreview.com/interviews/nigelcalder.html LondonBookReview.com interview with Nigel Calder]

Later in 2007, Svensmark and Friis-Christensen brought out a [http://www.spacecenter.dk/publications/scientific-report-series/Scient_No._3.pdf/view Reply to Lockwood and Fröhlich] which concludes that surface air temperature records used by Lockwood and Fröhlich apparently are a poor guide to Sun-driven physical processes, but tropospheric air temperature records do show an impressive negative correlation between cosmic-ray flux and air temperatures up to 2006 if a warming trend, oceanic oscillations and volcanism are removed from the temperature data. They also point out that Lockwood and Fröhlich present their data by using running means of around 10 years, which creates the illusion of a continued temperature rise, whereas all unsmoothed data point to a flattening of the temperature, coincident with the present maxing out of the magnetic activity of the Sun, and which the continued rapid increase in CO2 concentrations seemingly has been unable to overrule. This reply has so far not been published in a peer-reviewed journal.