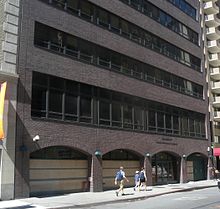 Headquarters of Hadassah in Manhattan

Hadassah, the Women's Zionist Organization of America is an American Jewish volunteer women's organization. Founded in 1912 by Henrietta Szold, it is one of the largest international Jewish organizations, with around 270,000 members worldwide, mostly women.[1]

Hadassah was established in 1912 in New York City by Henrietta Szold and the Daughters of Zion, a women's study group. The goal was to promote the Zionist ideal through education, public health initiatives, and the training of nurses in what was then the Palestine region of the Ottoman Empire. Szold served as the first president. Hadassah chapters soon opened in Baltimore, Cleveland, Chicago, and Boston. At the founders' meeting that coincided with the Jewish holiday of Purim, the group took the name Hadassah, the Hebrew name of the biblical heroine Esther, central figure in the celebration of Purim.[2]

Szold was the driving spirit behind the establishment of the first medical school in Palestine, as well as the country's first Tipat Halav mother and child clinics, the first hospital in Tel Aviv and the two Hadassah hospitals in Jerusalem.[1]

Hadassah runs the WUJS Arad Institute, in Arad, which brings foreign students to Israel. Hadassah took over the Youth Aliyah[3] program in 1934, which became identified with its founder Henrietta Szold, rescuing tens of thousands of children from the Holocaust and subsequently becoming involved in rescue of Jewish youth around the world and their integration in Israeli society. Hadassah is a major supporter and partner of the Jewish National Fund, which plants trees and implements other land reclamation programs in Israel.

Hadassah advocates for progressive issues of importance to women and to the American Jewish community, including First Amendment issues, separation of church and state, support for Israel, and other causes. Hadassah supports The Hadassah Medical Organization (HMO), consisting of two hospital complexes at Ein Kerem and Mount Scopus in Jerusalem. .[1] It has initiated and contributed to numerous medical aid projects in Israel and around the world, and built several hospitals and other facilities in Israel that were eventually turned over to state and municipal authorities. In the United States, Hadassah promotes health education, social action and advocacy, volunteerism, Jewish education and research, and connections with Israel. Hadassah has announced plans to establish Israel's first military medical school, scheduled to open in October 2009 as part of the Hebrew University School of Medicine.[1] 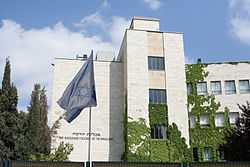 In July 2007, the organization inaugurated its 24th national president, Nancy K. Falchuk of Newton, Massachusetts.[1] Apart from health and education, Falchuk says Hadassah is active in the fight against anti-Semitism. Promoting Israel's security and encouraging stem-cell research are other goals of the organization.[1] In July 2011, Marcie Natan was inaugurated as national president.

In 2005, the two Jerusalem hospitals of the Hadassah Medical Organization were nominated for the Nobel Peace Prize. The nomination asserted three areas in which HMO has promoted peace in Western Asia:[4] 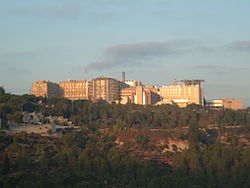 Shortly after its foundation in 1912, Hadassah established a nursing station in Jerusalem. Following World War I, it sent doctors and nurses to found medical clinics in Palestine, eventually building the foremost hospital in Western Asia on Mount Scopus in East Jerusalem in 1939. During the Arab siege of 1948, the hospital and the adjacent Hebrew University held out against repeated attacks. On April 13, 1948 the Hadassah medical convoy massacre took place:[5] A convoy of doctors, nurses and patients, on its way to the hospital under a flag of truce, was attacked by local Arabs. Nearby British troops did not intervene.[citation needed] About 80 people, mostly medical personnel, were murdered including Haim Yasky, the Director General of the Hadassah Medical Organization. The hospital was evacauted shortly thereafter, and five emergency hospitals were established at temporary locations throughout Jerusalem.[citation needed]

The cease fire of 1949 left Hadassah Hospital and the university enclave cut off from the Israeli sector of the city. A new hospital was built in Ein Kerem (Hadassah Ein Kerem hospital) on the west side of the city, and opened its doors in 1960. The original hospital was retaken in the Six Day War and was reopened in 1975, serving the Arabs of East Jerusalem and the West Bank.[citation needed]

Hadassah International is a network of dedicated volunteers, men and women of all faiths and nationalities, founded on the principle that advancement and cooperation in medicine and science transcend politics, religion, and national boundaries. Established in 1984, Hadassah International currently spans the five continents of North America, South America, Europe, Asia, and Australasia. Its mission is to:

In 1988, at the invitation of United States Agency for International Development (USAID), HMO medical staff members helped to plan, construct and open a hospital in Kinshasa, Zaire. In Kenya, Haddassah surgeons cured blindness in hundreds of people in a two week program. Hadassah purchased a hundred tons of medical supplies for Bosnia in 1996. Young Hadassah International is Hadassah International's branch for 18-35 year-olds, active in 10 countries.[citation needed]

The organization publishes Hadassah, a magazine. In 1993, it was nominated for a National Magazine Award.

Hadassah was introduced to Bernard Madoff Securities in 1988 by a French donor, through a $7 million gift. In addition to the gift, between 1988 and 1996, Hadassah deposited $33 million in its Madoff accounts, and by April 2007 had withdrawn $137 million. The last account statement showed approximately $90 million at the time the fraud was discovered.[7]

Hadassah faced a "clawback" for withdrawing more than it had invested.[8] After many months, Hadassah negotiated an agreement, allowing it to continue its commitment to Israel. Hadassah agreed to repay $45 million.[9]