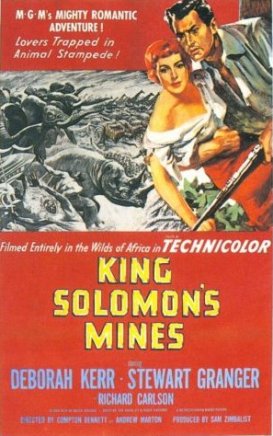 "King Solomon's Mines" (1950) is an loosely based of the novel by the same name by , starring , , and . It was adapted by , directed by and , and released by . The movie won for Best Cinematography, Color and Best Film Editing and was nominated for Best Picture.

Like virtually all film versions, it changes Haggard's plot to include a female lead. But this version strays even further from the novel than the 1937 British adaptation. There are several African characters in the book, particularly Umbopa, a king in disguise. In the earlier film, received top billing for the role, whereas in this version, Umbopa's importance is greatly reduced.

(), an experienced hunter and guide, is reluctantly talked into helping Elizabeth Curtis () and her brother John Goode () search for her husband, who had disappeared in the unexplored interior of Africa on a quest to find the legendary mines. They have a copy of the map he used. A tall, mysterious native, Umbopa (Siriaque), joins the . During the grueling journey, Elizabeth and Allan begin falling in love.

The party encounters Van Brun (), a lone white man living with a tribe. They learn that he met Curtis. However, when Allan recognizes him as a fugitive who cannot afford to let them go, they take him hostage to leave the village safely. Van Brun tries to shoot Allan, killing his faithful right hand man Khiva (Kimursi). Allan dispatches Van Brun and the party flees from the angry villagers.

When they finally reach the region, they are met by people who resemble Umbopa. They discover that their companion is royalty; he has returned to attempt to dethrone the evil King Twala (Baziga). Umbopa leaves with his people, while Allan, Elizabeth and John travel to a tense meeting with Twala. With his last rifle bullet, John kills a would-be attacker, temporarily quelling the natives.

The king's advisor, Gagool (Sekaryongo), communicates that they have seen Curtis and leads them to a cave in which they find the skeleton of Elizabeth's husband. While they are distracted by this discovery, Gagool takes the opportunity to leave and trigger a booby trap that seals them in the cave. However, they find a way out through an underground stream and return to the settlement, just as Umbopa and his supporters arrive.

Umbopa's people have an unusual method of deciding the kingship. The two claimants duel to the death. Despite cheating by one of Twala's men, Umbopa wins. Afterwards, he provides an escort for his friends' return trip.