The 1968 Summer Olympics, officially known as the Games of the XIX Olympiad, were an international multi-sport event held in Mexico City in October 1968. The 1968 Games were the first Olympic Games hosted by a developing country, and the first Games hosted by a Spanish-speaking country (followed in 1992 in Barcelona, Spain). It is the first Games ever held in Latin America, and it was the second after 1964 Summer Olympics to be hosted outside of Europe, Australia, or the United States. It was also the third Olympic Games to be held in autumn, then followed by the 1988 Summer Olympics.

The Mexican Student Movement of 1968 happened concurrently and the Olympic Games were correlated to the government's response. 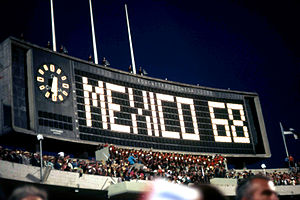 Opening ceremony at the Estadio Olímpico Universitario in Mexico City

On October 18, 1963, at the 60th IOC Session in Baden-Baden, West Germany, Mexico City finished ahead of bids from Detroit, Buenos Aires and Lyon to host the Games.[1]

On October 2, 1968, ten days before the start of the 1968 Summer Olympics the Plaza de las Tres Culturas was the scene of the Tlatelolco massacre. Kate Doyle had confirmed the death of forty four people including a soldier named Pedro Gustavo López Hernández.[3] Avery Brundage, president of the IOC, decided not to cancel the games. In the immediate aftermath of the massacre most prominent Mexicans, with the exception of Octavio Paz and Carlos Fuentes, condemned the violence but blamed the students for the massacre. As a response, during the opening ceremony, students flew a bird-shaped kite over the presidential box to shape a black dove as a silent protest for the repression.

On October 16, 1968, an action by two African-American sprinters at the Mexico City Olympics shook the sporting world.

Tommie Smith and John Carlos, the gold and bronze medalists in the men's 200-meter race, took their places on the podium for the medal ceremony wearing black socks without shoes and civil rights badges, lowered their heads and each defiantly raised a black-gloved fist as the Star Spangled Banner was played. Both of them were members of the Olympic Project for Human Rights.

Some people (particularly IOC president Avery Brundage) felt that a political statement had no place in the international forum of the Olympic Games. In an immediate response to their actions, Smith and Carlos were suspended from the U.S. team by Brundage and banned from the Olympic Village. Those who opposed the protest said the actions disgraced all Americans. Supporters, on the other hand, praised the men for their bravery.

Peter Norman, the Australian sprinter who came second in the 200 m race, and Martin Jellinghaus, a member of the German bronze medal-winning 1600-meter relay team, also wore Olympic Project for Human Rights badges at the games to show support for the suspended American sprinters.

In another incident, while standing on the medal podium after the balance beam event final, Czechoslovakian gymnast Věra Čáslavská quietly turned her head down and away during the playing of the Soviet national anthem. The action was Čáslavská's silent protest against the recent Soviet invasion of Czechoslovakia, and was repeated when she accepted her medal for her floor exercise routine. While Čáslavská's countrymen supported her actions and her outspoken opposition to Communism (she had publicly signed and supported Ludvik Vaculik's "Two Thousand Words" manifesto), the new regime responded by banning her from both sporting events and international travel for many years.

The organizers declined to hold a judo tournament at the Olympics, even though it had been a full-medal sport four years earlier. This was the last time judo was not included in the Olympic games.

East Germany and West Germany competed as separate entities for the first time in at a Summer Olympiad, and would remain so through 1988. Barbados competed for the first time as an independent country. Also competing for the first time in a Summer Olympiad were British Honduras (now Belize), Central African Republic, Democratic Republic of the Congo (as Congo-Kinshasa), El Salvador, Guinea, Honduras, Kuwait, Nicaragua, Paraguay, Sierra Leone, and the United States Virgin Islands. Singapore returned to the Games as an independent country after competing as part of the Malaysian team in 1964.

North Korea withdrew its athletes from Cuba immediately prior to the beginning of the Olympics when the IOC refused to refer to the country by its official name, the Democratic People's Republic of Korea or DPRK.

These are the top ten nations that won medals at these Games (host Mexico won 3 of each color of medal):