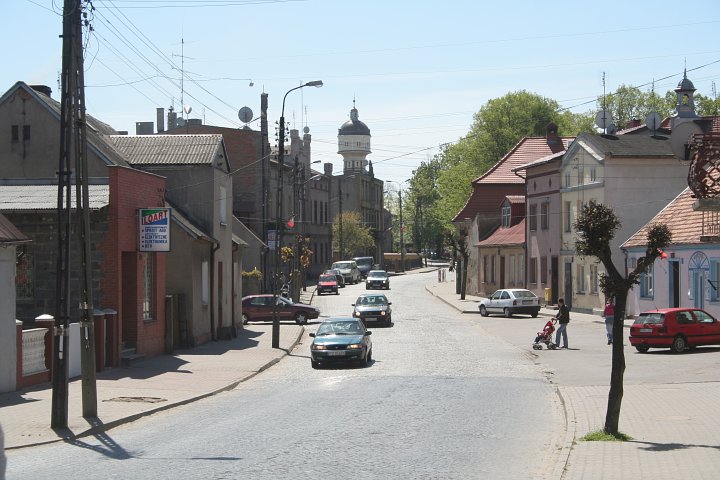 Trzemeszno [IPA-pl|t|sz|e|'|m|e|sz|n|o] ( _de. Tremessen) is a town in central belonging to the group of the oldest settlements in the region. The town’s name derives from an Old Polish word “Trzemcha” meaning the flower of the "Bird’s Cherry" plant, which once grew in the vicinity. It is situated in ; previously it was in (1975-1998).

Around the 900s, a kind of defensive settlement was created here. It soon changed its function into a market settlement. It was significant that the town lay on the trade route joining with northern and .

In the 1100s, Trzemeszno became a property of the regular canons monastery of St. Augustine. The monks were brought here by prince . Trzemeszno received its town rights before 1382.

From the second half of the 1600s, there began a decline of the town and region caused by wars (Swedish invasions) and plagues. In 1766, there were only 15 houses left in Trzemeszno. However, soon the town started to develop rapidly. An important period in town’s history is due to the activity of Michał Kościesza Kosmowski, who was the monastery abbot (1761-1804). He founded the "New Town" – a suburb, where cloth makers were settled, and St. Michael’s suburb for other craftsmen. Kosmowski founded also several buildings of public services: “Collegium Tremesnensis” a secondary school, hospital and a new brewery. The Polish patriot, , was born here in 1760. In 1791, there were 144 buildings in the town and almost 1000 people lived there. The main activities of the residents were connected to crafts, trade and framing. The enterprise, which took up artistic challenges, was rebuilding and changing into baroque style of the monastery church. The work was finished in 1791 when the church was consecrated.

In 1793, due to the , Trzemeszno became a part of and after , in 1815 it was incorporated into the . Development of the town slowed then.Fact|date=May 2008 In 1849, Trzemeszno was renamed "Tremessen" and belonged to of the Prussian . It was registered within .

In 1836 the government secularized the monastery.

In 1848, Trzemeszno became one of the main centers of national liberation movement in Greater Poland. The town’s residents (including many students) were also involved in the (1863). Trzemeszno’s secondary school has traditions of participating in national liberation fights. In 1844, a secret society of students called “Sarmatia” formed and from 1861 the National Society “Zan” was active.

In 1865, a Loan Bank (Kasa Pożyczkowa) and in 1874 an Industrial Society (Towarzystwo Przemysłowe) were founded in Trzemeszno. The later was significant for culture and education. Around 1880, a branch of Towarzystwo Czytelni Ludowych ("Society of Public Reading Rooms") and in 1894 the Gymnastic Society were founded.

Opening a railway line in 1872 joining Trzemeszno with Poznań, Toruń and Inowrocław had contributed to the town’s development.

At the end of , in the early days of the Greater Poland Uprising, the Polish residents of Trzemeszno took control of their town on , ; the town become a part of newly reconstituted Poland in the following months. The first years in free Poland were good for developing trade and crafts. However the situation was complicated by inflation, unemployment and economical crisis. Despite these problems, cultural and educational life flourished. Many events were organized by local societies and organizations. There was a cinema, and in 1937 the local weekly newspaper “Kosynier” began to be published. Secondary school played an important role in local culture.

In September 1939 the residents of Trzemeszno faced Nazi invasion, with many local deaths. During the Nazi occupation, the town’s name was changed to "Tremessen" again. Schools, libraries and the church were closed. However, terrorized residents did not remain passive. There was a secret military organization and a secret scout organization (Szare Szeregi).

After 1945, residents of Trzemeszno faced many difficult tasks. "Citizen Committees" were responsible for restoring closed enterprises and community services. The greatest challenge was restoration of the basilica church and secondary school which had been burned down by retreating Nazi troops.Rapid development of Trzemeszno took place in the 1960s and 1970s. The largest enterprise, employing over 1000 people, was Pomorskie Zakłady Materiałów Izolacyjnych “Izopol” (factory producing insulation materials). “Izopol” played an important role as a financial supporter and developer of the town.

In 1999, due to the administrative reform of Poland, Trzemeszno became a part of the Gniezno powiat and the .