Dalhousie University (commonly known as Dalhousie or Dal) is a public research university located in Halifax, Nova Scotia, Canada. The university comprises eleven faculties including Schulich School of Law and Dalhousie University Faculty of Medicine. It also includes the faculties of architecture, planning and engineering located at the Sexton Campus. It is a member of the U15, a group of research-intensive universities in Canada.[3]

Dalhousie University was established as a non-sectarian university in 1818 by the Lieutenant-Governor of Nova Scotia, George Ramsay, 9th Earl of Dalhousie, whom the university was named after. [4]Dalhousie is one of Canada's oldest universities, founded during British colonial rule. The early years of the school were marked by both financial and administrative struggles, with talks of closure surrounding the university until the latter half of the 19th century.

The university is made up of three campuses which make up 79 acres (32 ha), all within the Halifax Peninsula and near Halifax Harbour. Dalhousie's varsity teams, known as the Tigers, compete in the Atlantic University Sport conference of Canadian Interuniversity Sport.

"founded on the principles of religious tolerance." 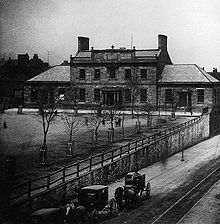 Dalhousie was the result of the desires of George Ramsay, 9th Earl of Dalhousie, the Lieutenant Governor of Nova Scotia to establish a non-denominational college in Halifax. The financing of the college had largely come from custom duties collected during the occupation of Castine, Maine during the War of 1812, investing GBP£7000 as the initial endowment and GBP£3000 reserved for the actual construction of the college. The college was established in 1818, molding it after the University of Edinburgh, which was located near Ramsay's home in Scotland.[6] The college was allowed to falter however as Ramsay had left Halifax shortly after its establishment to serve as the Governor General of British North America. The first instruction was not offered until 1838, with the operation of the college itself being only intermittent and no degrees awarded to at the college.[6] In 1841 Dalhousie was conferred university powers by an Act of the Legislature of Nova Scotia.[7] However, the word university would not be added into the school's name until 1863, when the school changed its name to The Governors of Dalhousie College and University.[8]

After nearly 50 years of intermittent operation, the university was finally reorganized in 1863 and Dalhousie reopened with six professors and one tutor. The first degrees were awarded in 1866. The student body that year consisted of 28 students working for degrees and 28 occasional students.[6] Despite the reorganization however, money continued to be a problem for the new institution. With talks surrounding the closure of the university due to its financial situation, in 1879, a wealthy New York publisher with Nova Scotia roots, George Munro, who was also the brother-in-law of Dalhousie's Board of Governors member John Forrest began to donate to the university, rescuing it from the threat of closure. In honour of the Munro's contributions, Dalhousie celebrates George Munro Day, which is observed the first Friday in February.[9]

Originally located at the present location of Halifax City Hall, the college had later moved in 1886 to Carleton campus and had spread gradually to occupy the Studley campus.[6] The university had continued to grow steadily during the 20th Century. Beginning in 1889, the Halifax Conservatory had become affiliated with Dalhousie, awarding degrees through the university. The conservatory would continue to be affiliated with the university until 1962.[10] In 1920 the University of King's College in Windsor, Nova Scotia had burned down. Through a grant from the Carnegie Foundation however, King's College was able to relocate to Halifax and had entered into a partnership with Dalhousie University.[11]

An agreement for Dalhousie to amalgamate with Technical University of Nova Scotia was made on 10 June 1996, with the act of amalgamation occurring in the following year on 31 March 1997.[12] The act which amalgamated the two schools had also formally changed the name of the university from The Governors of Dalhousie College and University to Dalhousie University.[13] As of 20 May 2011, Dalhousie has entered into discussions towards a merger with Nova Scotia Agricultural College by September 2012.[14]

The Office of Sustainability, which was formed in 2008, is charged with incorporating sustainability concepts and criteria into all major planning, assessment, policy, reporting and communications products and procedures.[19] In 1999, the university signed the Talloires Declaration and signed the University and College Presidents’ Climate Change Statement of Action for Canada on 11 December 2009.[20][21] The university campus received a B grade from the Sustainable Endowments Institute on its College Sustainability Report Card for 2011.[22]

The governance of the university is conducted through the Board of Governors and the Senate, both of which were given much of their present powers in the Unofficial Consolidation of an Act for the Regulation and Support of Dalhousie College in Chapter 24 of the Acts of 1863. This statute replaced earlier statutes from 1820, 1823, 1838, 1841 and 1848 and has since been supplemented 11 times, with the latest supplement in 1995.[8] The Board is responsible for the university's conduct, management, and control of the university and of its property, revenues, business, and affairs. Members of the board, known as Governors of the Board include the university's chancellor, president and 25 other members. Other members of the board include people from the university community such as four approved representatives from Dalhousie Student Union, as well as those in the larger surrounding community of Dalhousie, such as the Mayor of Halifax.[8] The Senate is responsible for the university's academics, including standards for admission into the university and qualifications for degrees, diplomas, and certificates.[8] The Senate consists of 73 positions granted to the various faculty representatives, academic administrators and student representatives. While there are 73 positions available within the Senate, one position is currently unoccupied.[23]

The president acts as the chief executive officer of the university responsible to the Board of Governors and to the Senate for the supervision of Dalhousie's administrative and academic works. Tom Traves is the 10th president of the university, serving the post since 1995.[24] The office was first created in 1838, with Thomas McCulloch serving as the university's first president. John Forrest was the longest serving president of Dalhousie, holding the office from 1885 to 1911.[25]

Dalhousie is a publicly-funded research university, and a member of the Association of Universities and Colleges of Canada.[30] There are 17,333[2] students enrolled at the university and 3,700 courses in over 180 degree programs currently offered at Dalhousie.[31][32]

Dalhousie has consistently been ranked one of Canada's top universities. The 2011 Times Higher Education World University Rankings placed Dalhousie 226-250th in the world, the thirteenth highest in Canada.[27] The 2011 QS World University Rankings ranked the university 234th in the world.[33] According to the 2011 Academic Ranking of World Universities rankings, the university ranked 201-300 in the world and 9-18 in Canada.[28] In terms of national rankings, Maclean's ranked Dalhousie tied for 6th in their 2011 Medical Doctoral university rankings.[29] The Schulich School of Law also ranked in Maclean's 2011 law schools ranking, placing 6th out of 16 common law schools in Canada.[34] Dalhousie was ranked in spite of having opted out—along with several other universities in Canada—of participating in Maclean's graduate survey since 2006.[35] The Faculty of Management has also gained international accolades, being named the most innovative business school in Canada by European CEO magazine on the 17 November 2010.[36]

Out of 50 universities in Canada, Research Infosource ranked Dalhousie University the 16th most research intensive school in the country for 2011, with a sponsored research income of $125.147 million, averaging $124,500 per faculty member.[37] In 2003 and 2004, The Scientist magazine placed Dalhousie among the top five places in the world, outside the United States, for postdoctoral work and conducting scientific research.[38] In 2007 Dalhousie topped the list of The Scientist’s “Best Places to Work in Academia”. The annual list divides research and academic institutions into American and international lists; Dalhousie University is ranked first in the international category.[39] According to a survey conducted by The Scientist magazine, Dal was named the best non-commercial scientific institute in which to work in Canada.[40]

Marine research at Dalhousie has become a large focus of the university, with many of the university's faculty members involved in some form of marine research.[45] Notably, Dalhousie is the headquarters of the Ocean Tracking Network, a research effort using implanted acoustic transmitters to study fish migration patterns.[46] Dalhousie also houses a number of marine research pools, a wet laboratory and a benthic flume, which are collectively known as the Aquatron laboratory.[47] Dalhhousie's faculty of engineering operates the Ocean Research Centre Atlantic, which is dedicated to carrying out research and tests in the areas of naval and off-shore engineering.[48] Schulich School of Law also operates the Marine & Environmental Law Institute, which carries out research and conducts consultancy activities for governmental and non-governmental organizations.[49] Dalhousie is also one of the founding members of the Halifax Marine Research Institute, founded on 2 June 2011. The institute, which is a partnership between a number of private industries, government and post-secondary institutions, was designed to help increase the scale, quality, internationalization and impact of marine research in the region.[50]

Dalhousie's campus newspaper, the Dalhousie Gazette, was founded in 1868, making it the oldest student newspaper in Canada and one of the oldest continuously-running student newspapers in North America. Carmina Dalhousiana, a song created in 1882, is commonly played and sung at various events around Dalhousie, such as commencement and convocation, and athletic games.[51]

Dalhousie's sports teams are called the Tigers. The Tigers varsity teams participate in the Atlantic University Sport (AUS) of the Canadian Interuniversity Sport (CIS). Varsity teams at Dalhousie include basketball, football, hockey, soccer, swimming, track and field and volleyball. The Tigers have garnered a number of championships in the past decade, winning over 63 AUS championships and 2 CIS championships.[52] More than 2,500 students participate in competitive clubs, intramural sport leagues and tournaments. Opportunities are offered at multiple skill levels and across a variety of sports to service a range of interest and ability. Dalhousie has 6 competitive sports clubs and 17 recreational clubs.[53][54] 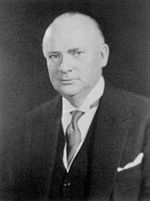 Dalhousie's graduates have found success in a variety of fields, serving at the heads of diverse institutions both in the public and private sector. Dalhousie University currently has over 100,000 alumni. Throughout Dalhousie's history, faculty, alumni, and former students have played prominent roles in many different fields, with 86 Rhodes Scholarship originating from Dalhousie.[58]