Psychopomp
This article is about the psychopomp in religion, mythology and psychology. For the song, see Psychopomp (song). 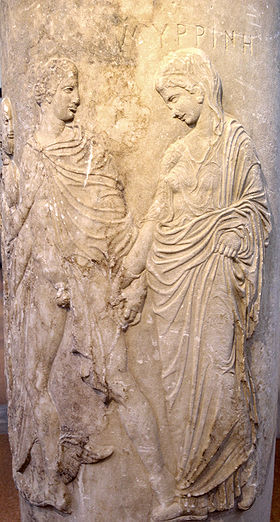 Psychopomps (from the Greek word ψυχοπομπός (psychopompos), literally meaning the "guide of souls") are creatures, spirits, angels, or deities in many religions whose responsibility is to escort newly deceased souls to the afterlife. Their role is not to judge the deceased, but simply provide safe passage. Frequently depicted on funerary art, psychopomps have been associated at different times and in different cultures with horses, Whip-poor-wills, ravens, dogs, crows, owls, sparrows, cuckoos, and harts.

In Jungian psychology, the psychopomp is a mediator between the unconscious and conscious realms. It is symbolically personified in dreams as a wise man or woman, or sometimes as a helpful animal. In many cultures, the shaman also fulfills the role of the psychopomp. This may include not only accompanying the soul of the dead, but also vice versa: to help at birth, to introduce the newborn child's soul to the world (p. 36 of [1]). This also accounts for the contemporary title of "midwife to the dying," which is another form of psychopomp work. 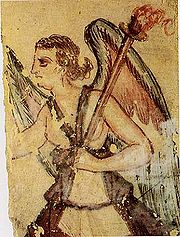 The Etruscan psychopomp Vanth, as depicted in a fresco in Etruscan tomb in Tarquinia.

The Barque of Charon, Sleep (Hypnos), Night (Nyx) and Morpheus, by Luca Giordano. 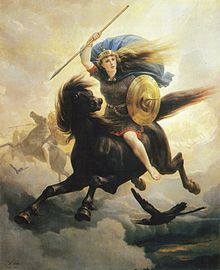 Valkyries of Norse mythology, as depicted by Peter Nicolai Arbo, 1869.

George Lass and the other reapers on the Showtime series Dead Like Me are more accurately described as psychopomps, as they do not actually kill people but instead remove their souls moments before death and escort them to the afterlife.

The Reapers of the TV series Supernatural act as psychopomps.

The title character of J. M. Barrie’s Peter Pan is said to act as a guide for children: “At first Mrs. Darling did not know, but after thinking back into her childhood she just remembered a Peter Pan who was said to live with the fairies. There were odd stories about him; as that when children died he went part of the way with them, so that they should not be frightened.”

Whipporwills feature prominently as malign psychopomps in many works of H. P. Lovecraft, perhaps most notably in The Dunwich Horror.

Sparrows as psychopomps play a notable role in Stephen King's novel The Dark Half and are actually referred to as "psychopomps" in the novel.

In Northern Lights Yambe Akka serves as a guide to dead or dying witches, taking them peacefully to the underworld. Later in the series it is revealed that every human has their own personal psychopomp. Piers Anthony's Incarnations of Immortality series is inaugurated by On a Pale Horse, which introduces protagonist Zane, who inadvertently assumes the immortal role of psychopomp, Thanatos, through a confluence of circumstances surrounding a noncommittal suicide attempt.

The 2008 film, The Spirit, features Lorelei, a phantom siren who continually attempts to lure The Spirit into the afterlife with her mesmerizing song.

Psychopomps are also depicted in the Trent Jamieson's novel Death Most Definite. Not only are humans used as psychopomps but sparrows and crows are as well.

In the Fabula Nova Crystallis Final Fantasy mythology, Etro is the fal'Cie goddess of death. She greets the souls of dying humans at the doorway to the afterlife, the Invisible World.

Psychopomp is a playable character class in Bloodline Champions.

Davy Jones in Pirates of the Caribbean: Dead Man's Chest was originally a psychopomp, charged to ferry souls of the dead to the Netherworld by the sea goddess Calypso. When Calypso failed to return to him after his ten year requirement, Jones perverts his purpose to actively harm sailors and offer them 100 years of service to him to stave off death. Because of this, Jones and his crew gradually become corrupted by the sea, changing in amalgamations of sea plants and animals. When Will Turner takes over as captain of the Flying Dutchman, the crew reverts back to their human forms as Turner stay true to his purpose when his wife Elizabeth dutifully waits for him after his ten years.