Our Lady of the Gate of Dawn

Our Lady of the Gate of Dawn 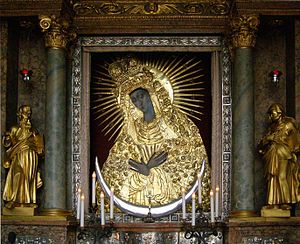 Painting of The Blessed Virgin Mary Mother of Mercy with numerous votive offerings (hearts) below it.

Our Lady of the Gate of Dawn (Lithuanian: Aušros Vartų Dievo Motina, Polish: Matka Boska Ostrobramska, Belarusian: Маці Божая Вастрабрамская) is the prominent painting of the Blessed Virgin Mary venerated by the faithful in the Chapel of the Gate of Dawn in Vilnius, Lithuania. The Renaissance painting, completed possibly in the first half of the 17th century, is an unusual portrayal of Madonna as she is depicted without infant Jesus. The artwork soon became known as miraculous and inspired a following. A dedicated chapel was built in 1671 by the Discalced Carmelites. At the same time, possibly borrowing from the Eastern Orthodox tradition, the painting was covered in expensive and elaborate silver and gold clothes leaving only the face and hands visible. In the following centuries, the following grew stronger and Our Lady became an important part of religious life in Vilnius. The following inspired many copies in Lithuania, Poland, and diaspora communities worldwide. The chapel was visited by Pope John Paul II in 1993. It is a major site of pilgrimage in Vilnius and attracts many visitors, especially from Poland.[1] 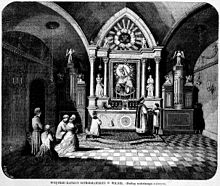 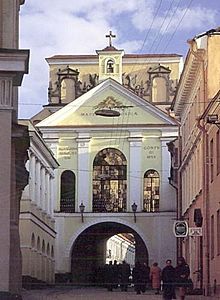 It is believed that the painting was commissioned by the government of Vilnius.[2] It was customary to place paintings or sculptures of various saints in niches of walls hoping that they would protect the building.[3] The governor of Vilnius ordered two paintings, depicting Lord Jesus the Savior ("Salvator Mundi") and Blessed Virgin Mary.[2] Both of them decorated the Gate of Dawn of the Vilnius city wall – a defensive structure with no religious importance at the time. Our Lady was placed much in the same place as it is now.[2] It was place in a small niche, protected by shutters from rain and snow. Narrow and steep stairs led to a small balcony for the faithful, where they could lit candles and pray.[3] The painting of Lord Jesus decorated exterior of the gate. In 1650 Albert Wijuk Kojałowicz published Miscellanea, listing all miraculous paintings of Mary, but did not mention Our Lady.[2]

In the mid-17th century the Discalced Carmelites built the Church of St. Teresa and their monastery near the Gate of Dawn.[3] In 1655 the city was captured, looted, and depopulated during the Battle of Vilnius of the Russo-Polish War. Likely the city government, short of funds, transferred maintenance of the gate and the paintings to the Carmelites.[3] The painting of Lord Jesus was moved the Carmelite monastery and later to Vilnius Cathedral (a fresco of Jesus was painted in its original niche in the 19th century).[4] In 1671, the monks established a wooden chapel, devoted to Our Lady, next to the gate tower. Around the time the painting was covered in expensive silver clothes. By that time, the painting was already an object of public veneration and the chapel dedication ceremony was attended by many prominent figures of the time: Chancellor Krzysztof Zygmunt Pac, Grand Hetman Michał Kazimierz Pac, senators of the general sejm, and others.[5]

In May 1715, the wooden chapel burned down, but the painting was saved and placed in the Church of St. Teresa. In 1720 a new brick chapel, which survives to this day, was dedicated in presence of four bishops, a number of senators, and a large crowd of the faithful.[2] In 1761, monk Hilarion published a book titled Relacja o cudownym Obrazie Naijświętszej Marji Panny etc. It is the primary source for early history of the painting and also the first collection of various miracles attributed to Our Lady. In 1773 Pope Clement XIV granted indulgence to the faithful, designated the chapel as a place of public worship, and established a charitable society.[5] At the turn of the 19th century, Tsarist authorities demolished the city wall and all city gates except for the Gate of Dawn and its chapel. In 1829, the chapel underwent restoration and acquired elements of late Neoclassicism. Since the entrance to the chapel was from inside the Carmelite monastery, women could not go inside. One devoted woman sponsored construction of a two-storey gallery on the side of the street in 1830.[2]

In 1927, major restoration works were completed under bishop Romuald Jałbrzykowski. With permission from Pope Pius XI, the painting was solemnly crowned as Mother of Mercy by Cardinal Alexander Kakowski, Archbishop of Warsaw, on July 2, 1927. The ceremony was attended by President of Poland Ignacy Mościcki, First Marshal Jozef Pilsudski, Primate of Poland August Hlond, 28 bishops, and other dignitaries.[5] 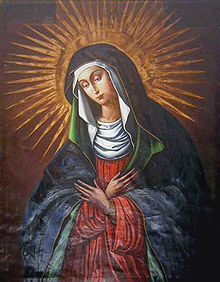 The original painting is 163 by 200 centimetres (64 × 79 in) and was painted by an unknown artist on 8 oak planks 2-centimetre (0.79 in) thick. As usual for Northern Europe, a very thin layer of chalk priming was applied to the planks before painting in tempera.[6] Later Our Lady was repainted in oil paint. Some restoration work was completed in mid-19th century. Major restoration works were completed in 1927.

The painting depicts complex personality and devotion to Mary. Her head is gently leaning to her right, her eyes are half closed, her hands are crossed in devotion; this reminds that she is a virgin, humble servant of the Lord, merciful mother and patron of the people.[4] At the same time, her head is surrounded by sun rays and her body is usually covered in elaborate gold and silver clothes and crowns; these are the symbols of her divine and majestic role as the Queen of Heaven.[4] The painting also reminds of Tota pulchra es (You are all beautiful), an old Catholic prayer.[7]

The tradition to decorate paintings with clothes or revetment (riza) of precious metals may have been borrowed from Eastern Orthodox. The clothing of Our Lady is composed of three gilded silver parts, each completed by different artists at a different period. The head and shoulders were covered in 1670–1690; the chest piece was adapted from a different painting in 1695–1700; the bottom of the painting was completed by 1730s.[8] The clothes are richly decorated in floral motifs: roses, tulips, narcissi, carnations,[9] and at least six other species.[8] The flowers were references to hortus conclusus (enclosed garden), a symbol of Mary's virginity and purity.[8]

The head of Our Lady is adorned with two crowns. Two little angels lower the large Rococo-style crown with colored glass inlays upon the smaller Baroque crown.[8] Some argued that the two crowns, resembling royal and ducal insignia, represented Kingdom of Poland and Grand Duchy of Lithuania respectively.[10] In 1927, duplicate crowns were made of pure gold, donated by the people, and were blessed by Pope Pius XI.[8] On July 2, 1927, the coronation ceremony took place and painting received the title of Mother of Mercy. The gold crowns were lost, possibly during World War II.[8]

Sculptures of Mary's parents – St Joachim and St Anne – stand on both sides of the painting between the altar columns.[7]

The origin of the painting is not known. According to historian Teodor Narbutt (1784–1864),[3] the painting was acquired by Algirdas, Grand Duke of Lithuania (1345–1377), as a war trophy from Crimea. This note, based on dubious sources, along with dark colors of the painting that resembled Byzantine icons, inspired 19th-century Russian historians to claim that the painting was Orthodox and not Roman Catholic.[3] This theory was popularized in various articles, brochures, studies and is sometimes quoted today.[11] Others claimed that the painting was commissioned by King of Poland Sigismund II Augustus and depicted his wife Barbara Radziwiłł.[4]

With silver cloth covering the entire painting, except for the face and hands, it was very hard for art historians to determine in what period the painting was created.[3] In 1927, the silver cover was removed for the first time in decades. The painting was analyzed and restored. Based on the new data gathered during the restoration, Mieczysław Skrudlik came to a conclusion that the painting was completed around 1630–1650 and linked it with another painting in the Corpus Christi Church in Krakow, created by artist Luke in 1624.[5] Mary Kałamajska Saeed in her 1990 thesis argued that Our Lady of the Gate of Dawn was a work of a local artist and was inspired by contemporary Flemish mannerist painter Marten de Vos through an engraving of Thomas de Leu (1580).[5][6] 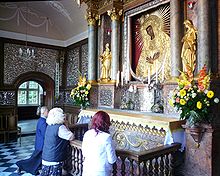 Praying inside the chapel

In 1761, monk Hilarion published a book, collecting 17 miracles attributed to the painting and Mary. His first recorded miracle occurred in 1671, the same year the first chapel was built. A two-year old child fell from the second floor onto stone pavement and was badly injured. The parents then prayed to Our Lady and the next day the child was healthy once again.[12] In 1702, Vilnius was captured by the Swedish Army during the Great Northern War. The Swedes, who were Protestants, mocked the painting, forbade songs and prayers, and partied around the Gate of Dawn. One soldier even shot at the painting (the hole can still be seen on the right sleeve).[2] In an early morning of the Great and Holy Saturday, heavy iron gates fell and crushed four Swedish soldiers – two died instantly and two later from injuries.[2] The next day, during the Easter, the Lithuanian Army successfully counterattacked near the gate. The commander, grateful for the victory, bestowed the chapel with a large silver votive offering.[3] The painting is also credited with other miracles: subduing a city fire in 1706, punishing a Russian soldier for an attempt to steal her silver clothes in 1708,[12] and numerous miraculous healings. Other stories of various miracles were kept by the Carmelite monks, but those books did not survive.[2]

Votive offerings became a tradition. They are usually small silver objects (hearts, crucifixes, figures of praying people, images of cured eyes, legs, arms).[13] Several times (1799, 1808, 1810) some of these objects were taken down and melted into liturgical objects. In 1844, there was a total of 785 offerings.[13] Twelve years later, in 1856, the number almost doubled to 1,438. From 1884 to 1927, a journal of new offerings was kept. During that time it registered 2,539 new gifts.[13] Currently, there are about 8,000 silver votive objects in the chapel.[9] The large crescent moon, located right beneath Our Lady, is also a votive offering. Its origins are unknown, but it bears an inscription in the Polish language and a date of 1849.[8] The moon incorporates well with the silver cloth, adding additional parallels with the Woman of the Apocalypse, described in the Book of Revelation as a woman clothed with the sun, and the moon under her feet, and on her head a crown of twelve stars.[14]

Shrines in other locations

Chapel devoted to Our Lady of the Gate of Dawn in the St. Mary's Church in Gdańsk

Today this holy image is venerated by Roman Catholic and Orthodox faithful of many countries whose origins lie in the Polish–Lithuanian Commonwealth, including Lithuania, Poland, Belarus, Ukraine and their diasporas worldwide. In Lithuania itself there are 15 churches as well as Lithuanian parishes in Montreal and Buenos Aires devoted to the Blessed Virgin Mary of the Gate of Dawn. On February 26, 2007, Parish of Our Lady of Vilnius (Aušros Vartų Parapija) was closed by the Archdiocese of New York.[15] The sanctuary had featured an icon of Our Lady, painted by the artist Tadas Sviderskis in the 1980s.

In Poland the biggest church devoted to Our Lady is the Marian Basilica in Gdańsk.[5] Other shrines of the holy icon are found in Poland (Białystok, Drogosze, Kętrzyn, Olsztyn, Skarżysko-Kamienna and Wrocław), United Kingdom (Kidderminster), United States (South River, NJ), and Australia. Copies of the painting can also be found in Church of Saint-Séverin in Paris and St. Peter's Basilica in Vatican.