Infobox Film
name = The Legend of the Lone Ranger 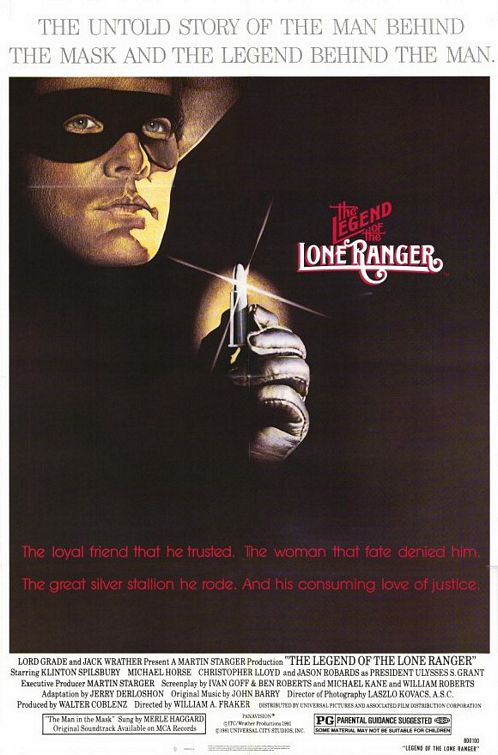 "The Legend of the Lone Ranger" is a 1981 film of the story of , a Western character created by and . The title has been used twice previously.

The film was released to massive publicity in 1981 and did poorly. receipts were far short of the amount needed to recoup the costs of the film, and critical reviews were almost unanimously negative. Despite the presence of renowned actors in supporting roles, including as Butch Cavendish and as President , the film vanished from theaters rapidly. The actor playing the Ranger () has never appeared in another film, while the actor portraying Tonto, , has done somewhat better, appearing in many minor films and as a regular on the Canadian television series as well as the American series "".

* The events surrounding the release of this movie would be satirized in the episode "Who Was That Mashed Man" of the TV sitcom , where a case comes through the courtroom involving: an elderly man who played the "Red Ranger", a famous cowboy of yesteryear that was popular with children; and the producers of a movie that is a modernized remake of the character...turning him into a swearing, womanizing modern action hero. Both parties are clashing over the elderly man appearing in public as his old persona.

* Humorist satirized the producers' legal action against in his newspaper column. The piece (titled "Bye Bye Silver Bullets") had the Lone Ranger in a swank attorney's office being forced to hand over Silver, his mask and his silver bullets.

* Klinton Spilsbury's dialogue was overdubbed for the entire movie by actor .

* Two of the movie's four screenwriters, and , previously created the hit TV series "."

* The movie's ballad-narration, "The Man In The Mask", was composed by of "" and Sing fame.

* The film had a line of action figures which included .