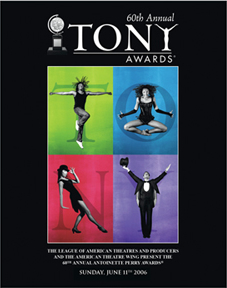 The 60th Annual Tony Awards took place at on , . The award ceremony was broadcast live on the television network in the . The 2006 Tony Awards did not feature a host, but instead over 60 stars presented awards at the ceremony.

The Awards for Excellence in Theatre, more commonly known as the , recognize achievement in live American theatre and are presented by the and the League of American Theatres and Producers (now called ) at an annual ceremony in . The awards are for Broadway productions and performances plus several non-competitive Special Awards (such as the Regional Theatre Award).

The opening number started with singing three popular songs from three . Connick, (who was heavily medicated to be able to perform, because of a ruptured disc in his spine, [ [http://www.findarticles.com/p/articles/mi_qn4155/is_20060613/ai_n16474916 From FindArticles.com] ] ), was also a nominee and a performer with the cast of "". Every one of the sixty presenters and co-hosts joined the stage during the third song. Connick performed "Tonight" (""), "" (""), and "There's No Business Like Show Business" ("").

Shows that performed were:

Beginning with the awards, an additional category was added on a trial basis for the 2005-2006, 2006-2007 and 2007-2008 seasons: Best Recreation of a Leading Role by an Actor/Actress. This category was intended to honor actors and actresses who were cast as replacements and joined a long-running show after its official opening, and would not have otherwise had the chance to be recognized for a potentially Tony-worthy performance. This award may or may not have been given in any particular year. Shows were to submit replacements they deemed worthy of consideration and a twenty-four-member committee, The Tony Awards Administration Committee, were to attend the shows and evaluate the performances.

No award was given in 2006, because neither of the two performers nominated, and , received the necessary sixteen votes for a win.

Following the 2006 Tony Awards, the Administration Committee voted unanimously to abandon the category.

"Winners are in bold"

*Special Tony Award for Lifetime Achievement in the Theatre
**