Meade Instruments Corporation (aka Meade) is a multinational company headquartered in Irvine, California, that manufactures, imports, and distributes telescopes, binoculars, spotting scopes, microscopes, CCD cameras and telescope accessories for the consumer market.[1] It is the world's largest manufacturer of telescopes.[2] Besides selling under its "Meade" brand name, the company sells solar telescopes under the Coronado name. Its products are also imported and sold in Europe by a former subsidiary under the Meade and Coronado brand names.[3]

Founded in 1972 by John Diebel, Meade started out as a mail order seller of small refracting telescopes and telescope accessories manufactured by the Japan based Towa Optical Manufacturing Company.[2] Meade started manufacturing its own line of products in 1976, introducing 6" and 8" reflecting telescopes models in 1977. In 1980 the company ventured into the Schmidt-Cassegrain market that up to that time had been dominated by Celestron Corporation.[2] Meade has a long history of litigation with other companies over infringement of their patents, particularly with its once bitter rival Celestron. In August 2008, Meade modified their line of schmidt-cassegrain telescopes with changes to the optical surfaces in design they call "Advanced Coma-Free optics" (ACF Optics).[4] 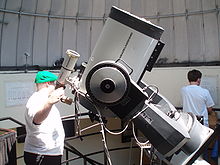 A 40 cm Meade LX200 in the York University Observatory

Meade manufactured its products formerly in Irvine, California, and currently in an expanded plant in Tijuana, Mexico.[5] Products produced by Meade include:[6][7]

ACF (Advanced Coma-Free) is an altered version of the Meade's previous schmidt-cassegrain telescopes that replaces the traditional spherical schmidt-cassegrain secondary mirror with a hyperbolic secondary mirror. In the new design the full aperture corrector is slightly altered in shape and combined with a spherical primary mirror.[8] Meade's literature originally describe their ACF as a variation on the Ritchey-Chrétien telescope, although it does not use the two hyperbolic mirror combination in that design (being more of an aplantic design).[9] After a legal settlement Meade dropped the claim. 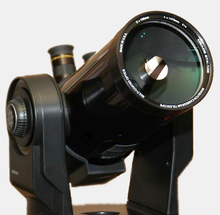 Meade currently produces a line of Maksutov telescopes under their ETX series (Everybody's Telescope). They were first produced in 90 mm (3-1/2") Maksutov Cassegrain telescope in 1996. They range in size from 90 mm to 125 mm.

Many Meade telescope lines are classified by the self aiming computerized alt-azimuth and equatorial mounts they come on, a technology commonly called a "GoTo" mount.

In 2004, Meade acquired Coronado Filters from founder and designer David Lunt,[14][15] who produce an extensive range of specialty telescopes that allow views of the sun in Hydrogen-Alpha, and formerly, at Calcium K line wavelengths. The Meade Coronado telescopes are called "Solarmax 40" or higher depending on the model. 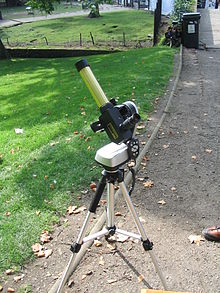 Accessories produced by Meade include the series 5000 eyepieces that are comparable in construction to those of Chester, New York-based Tele Vue Optical's "Nagler" (82-degree field of view), "Panoptic" (68-degree field of view), and "Radian" (60-degree field of view) eyepieces. Meade sells Deep Sky and Lunar digital imagers for telescopes. They also market the mySKY & mySKY Plus, multi-media GPS devices guiding users to the sky, similar to the competing Celestron SkyScout.

In November, 2006, plaintiffs including Star Instruments and RC Optical Systems, manufacturers of traditional Ritchey-Chrétien optics and telescopes, filed a civil lawsuit against Meade, several dealerships, and other individuals in federal court (New York Southern District). The complaint was against Meade advertising their RCX400 and LX200R models as "Ritchey-Chrétien." The plaintiffs claimed these models did not use true Ritchey-Chrétien optics and therefore Meade and its retailers were committing false advertising infringing on the plaintiff's market.[16] In January 2008, Meade settled, with a "small" amount paid to the plaintiffs and the requirement to rename the affected products, not using any initials that might suggest Ritchey-Chrétien.[17]

Meade has had financial problems in the past and has survived with the help of its founder, John Diebel, purchasing back the company.[18] However, Meade in the past few years has run into another round of financial woes, since Diebel sold the company again. The previous CEO since May 2006, Steve Muellner[19] had announced various bad news for the company since he had the lead role for Meade. Meade's Irvine, California manufacturing plant was closed, with manufacturing moved to a new plant in Mexico, and a majority of the administrative positions were cut.[20][21] Meade's customer service line has also been affected by the move to Mexico, including shorter operating hours and the elimination of the callback option.[22][23] Meade is also looking at other options for the uncertain future of the company.[24][25] No matter what the future was holding for the company, Muellner and some of the board members signed an agreement to cover themselves financially.[26]

In April 2008, Meade sold two of its three non-telescope product brands (Weaver/Redfield) to two companies for a total of $8 million. However, as compensation for divestiture of these two brands, out-going VP of Sales, Robert Davis, received a $100,000 bonus from the company.[27][28] On June 13, 2008, Meade sold their last non-telescope brand Simmons to Bushnell for $7.25 million.[29][30] Also in 2008, Meade's stock value fell below one dollar, bringing up the possibility of Meade being delisted from the stock exchange.[31] On October 3, 2008, Meade eliminated Donald Finkle's Senior Vice President position with the company providing him with one year of salary as severance and certain other benefits.[32]

Meade announced on January 29, 2009 that it had sold Meade Europe, its European subsidiary, for 12.4 million dollars, thus relieving much of Meade's debt. However, that reduced the company's assets greatly.[33] Further changes and unknown stability of the company was announced on February 5, 2009, with the resignation of Steve Muellner, Chairman of the Board Harry Casari and fellow board member James Chadwick. Former CEO Steven Murdock was reinstated as Meade CEO.[34] On March 5, 2009, the company announced the resignation of CFO Paul Ross and the assumption of the position by John Elwood. With his resignation, Ross receives a severance in the lump sum of $260,000.[35] During the summer of 2009, Meade announced a 20:1 reverse stock split in hopes of raising the value of their stock.[36]