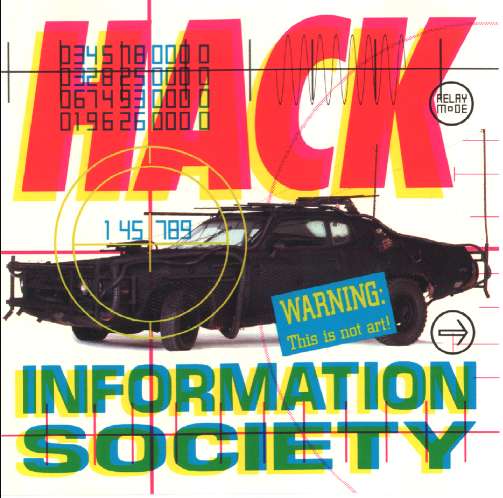 
"Hack" is an album by Latin freestyle band Information Society.The album sold quite well but did not outsell their smash debut album. It is the only major-label-distributed title that has the modern Tommy Boy Records logo on it.

: "Note: the sub-listings under several main tracks are index 2, while each of the main tracks is index 1. These are listed as the part of the track number on the back cover of the . For example, "Slipping Away" is 14.1, "Here Is Kazmeyer" is 14.2, though they will usually play or be ripped as a single track numbered 14."

Riding on the success its self-titled major-label debut, Kurt decided to have the band experiment more on this album with a more radical, harsher sound. The other members agreed somewhat, feeling that they should stay on level ground with the pop sensibilities. This is more pronounced on tracks like "Seek 200" and "Hard Currency." This notion would eventually lead to Don't Be Afraid, Kurt's solo effort.

On Charlie X, the line "I could make you all go away, any time I want to." is a reference to the Star Trek episode of the same name.

Like the others, this album is thick with samples and loops, from , , and to along with too many others to list.

The cassette tape for this album used an unusual naming convention for the sides. Instead of 1 and 2 or A and B, there was the Gilligan Side and the Skipper Side.