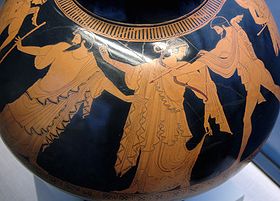 In Greek mythology, Marpessa (Ancient Greek: Μάρπησσα Márpessa) was an Aetolian princess, and a granddaughter of Ares. She was kidnapped by Idas but loved by Apollo as well. Zeus made her choose between them. According to another myth, she was the daughter of Evenus and Alcippe. She married Idas after he kidnapped her with a winged chariot. Idas did this as a challenge to her father, who after chasing the couple for a long time, killed his horses and then drowned himself in a nearby river, which took his name. Marpessa then, to make Idas happy, rejected Apollo’s love.

Marpessa is also the name of an Amazon Queen.

Marpessa, as a name, was used to describe a 206,000 ton Shell Oil company supertanker (VLCC). In December 1969, it became the world's largest oil tanker to sink up to that date. Marpessa had been on its maiden voyage from Europort, Rotterdam, when an explosion ripped through the hull and it foundered 50 miles off the west coast of Africa.