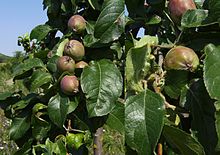 Apples thinning: before (at left) after (at right)

Thinning is a term used in agricultural sciences to mean the removal of some plants, or parts of plants, to make room for the growth of others.

Thinning in forestry is the selective removal of trees, primarily undertaken to improve the growth rate or health of the remaining trees. This may be done to make the stand more profitable in an upcoming final felling. Overcrowded trees are under competitive stress from their neighbors. Thinning may be done to increase the resistance of the stand to environmental stress such as drought, insect infestation or extreme temperature. [1] A thinning in which the trees removed have little or no economic value is called a pre-commercial thinning. Ecological Thinning is a variant of this being trialled for use in forest conservation in Australia. Chemical thinning is a form of non-commercial thinning in which the trees are killed while they stand by injecting a chemical such as glyphosate (Round Up) into a cut made in the stem. This reduces the number of live stems remaining, providing a benefit to those that remain and may be undertaken where the cost of a traditional thin is high. It can also be done on very exposed sites where breaking the canopy through a traditional thinning operation would expose the stand to a high risk of windthrow.

In agriculture and gardening, thinning is the selective removal of flowers, fruits, shoots, and seedlings or young plants to allow adequate space for the remaining organs/plants to grow efficiently. In large-scale farming, techniques like precision seeding and transplanting can eliminate the need for thinning by starting plants at their optimum spacing. On a smaller scale, such as a home vegetable garden, thinning can be used as a way to make maximum use of space for certain crops. For example, beets, carrots, green onions and others can be planted densely, and then thinned to make room for continued growth of the plants left in the soil, and also as a harvest of baby vegetables (beet greens, baby carrots, baby onions).

In digital geometry, thinning is the transformation of a digital image into a simplified, but topologically equivalent image.