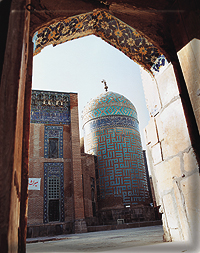 Ardabil (Persian and Azeri: اردبیل) also known as Ardebil; : Artavil) is a historical city in north-western . The name Ardabil comes from the name of "Artavil" (mentioned in ) which means a holy place. [ [http://www.iranchamber.com/provinces/06_ardabil/06_ardabil.php Iranian Provinces: Ardabil ] ] Ardabil is the center of Ardabil province. Its population is estimated to be around 340,386, the majority of whom are ethnic Azerbaijanis . Famed for its and trade tradition, the ancient s are considered some of the best of the classical creations. Ardabil is also known as the seat of the sanctuary and tomb of Safî ad-Dîn, of the . Its are coord|38|15|N|48|17|E|type:city.

Ardabil is located about 70 km from the , 210 km from the city of and 25 km from 's border. It has an average altitude of 1263 m and total area of 18.011 km².Neighboring on the and the , this city is of great political and economical significance.The of Ardabil has been blessed with splendid natural beauty and numerous sights.It is located on an open plain 1,500 m above sea level, just east of Mount (4,811 m), where cold spells occur until late spring.

Cold and semi-arid, many tourists come to the region for its cool climate during the hot summer months maximum temperatures reaching to 35 °C . The winters are long and bitter cold, with a temperature plummeting to -25 °C. The annual rainfall is around 380 mm.

The province is believed to be as old as the era 2500 BC. It is mentioned in the , where prophet was born by the river and wrote his book in the Mountains. During n era the city had a special importance among the cities of Azarbaijan. Some Muslim historians attribute foundation of Ardabil to king of . The Persian poet also credits the foundation of the city to Peroz I. Ardabil suffered some damages caused by occasional raids of s between 4th to 6th century AD. Peroz repaired those damages and fortified the city. Peroz made Ardabil the residential of provincial governor (, in Persian: مرزبان) of Azarbaijan.

During the , Ardabil was the largest city in North Western Iran, and remained so until the invasion period. Ardabilis fought the Mongols three times, however the city fell after the third attempt by Mongols. They massacred not only the Ardabilis but inhabitants of neighboring villages and killing everyone they could find. Incursions of Mongols and Georgians left the city in ruins for nearly three centuries til the advent of s.

Safavid Shah started his campaign to nationalize Iran's government and land from here, but consequently announced as his capital in 1500CE. Yet Ardabil remained an important city both politically and economically until modern times.

*Masjid Jameh : Ruins of once magnificent and unique Mosque.

*Mirza Ali Akbar mosque and school : This comlex dates back to period

*Ardabil bazaar : This beautiful Persian bazaar was built during Safavid period and in addition to main bazaar hall with open vaults has a and a small yet mystifying mosque.

"Being a city of great antiquity, the origins of Ardabil go back 4000 to 6000 years (according to historical research in this city)." This city was the capital of Azerbaijan province in different times, but its golden age was in the period.

The other significant historical monuments are as follows: the mausoleum of Sheikh Jebra'il, located 2 km north of Ardabil, the old but always lively bazaar, the babadavood anbaran the Friday mosque, and a few ancient bridges. In addition to these, in many villages of Ardabil, relics of ancient monuments, including tombs have been found.

It has many hot springs and beautiful natural landscapes and these attract tourists. The mineral springs of Ardabil are Beele-Darreh, Sar'eyn, Sardabeh and Booshloo, being famous for their medicinal qualities throughout Iran.

It has also many beauty lakes: the largest of which are Ne'or, , ShoorGel, NouShahr and Aloocheh that are the habitats of some species of water birds. The beautiful Lake Ne'or is located in a mountainous area 48 km south-east of the city of Ardabil. It covers an area of 2.1 km² and has an average depth of 3 metres. It is fed by springs in the lake bed.

Lake is located in a hilly area south of the city of Ardabil and covers an area of 640,000 m². The surface of the lake is covered with a thin white layer of minerals, being useful for healing skin diseases and rheumatism. Near the lake there is the leisure complex of .

*Baliqly Chay River :Meaning "a river with many fish" in Azarbayjani language, this river originates from the Sabalan Mountains and passes through Ardabil city. As a result, many villages and townships have settled around this river. It also irrigates much of the agricultural lands in this province.

Sabalan(real name : Savalan) (in Persian سبلان "Sabalân" ;also called "Sāvālān" in Azerbaijani) is an inactive in of northwestern about 20 miles west of Arbadil. Sabalan is the third highest mountain in Iran and a permanent has formed at the summit. Sabalan has a (Alvares) and different tourist areas such as the spa. The mountain is known for its beautiful vistas, including the Shirvan gorge, where few climbers ever venture.

*
*,scholarly.
*, Mathematician and computer scientist, and a professor of computer science at the University of , .
*,wife of the current president of Azerbaijan Ilham Aliyev, UNESCO Goodwill Ambassador (her father ,,was originally from Ardabil).

*, ancient revolutionary leader fighting the in Iran.
*Bahram Ardabili and Roham Ardabili, heroes of Ardabil in .
*, hero of in Tehran, Tabriz, and Ardabil.
*, founder of the .
*, founder and chairman of separatist and "", created and supported by Soviet occupational forces in north-western .
*, Former Minister of Roads and Transportation of Iran.
*, member of Demokrat party in Tehran and Mashhad.

The economy of Ardabil is partially agricultural, partially tourist based, with some industries in operation.

The Iranian government in 2006 announced plans to build "the largest textile factory of its kind in the Middle East" in Ardabil. [ [http://www.payvand.com/news/06/jan/1190.html Huge textile factory, largest in Middle East to become operational in Ardebil ] ]

(AIG) has one of the largest textile conglomerates in Iran.which is located in the provinces called and Ardabil. The group has received numerous awards for being one of the top 20 exporters and industrial groups in Iran since 1998. It is the first company to produce (high-density fiberboard), (medium-density fiberboard) ,, and multi layer films in Iran.

AIG has the first private industrial site in in the city of Ardabil, which has fifteen main factories owned by (AIG). This Industrial zone covers an area of 100 hectares and Residential Area for engineers and managers of the company.