The Matobo National Park forms the core of the Matobo or Matopos Hills, an area of granite kopjes and wooded valleys commencing some 35 kilometres south of Bulawayo, southern Zimbabwe. The hills were formed over 2 billion years ago with granite being forced to the surface, this has eroded to produce smooth "whaleback dwalas" and broken kopjes, strewn with boulders and interspersed with thickets of vegetation. Mzilikazi, founder of the Ndebele nation, gave the area its name, meaning 'Bald Heads'.

The Hills cover an area of about 3100 km², of which 424 km² is National Park, the remainder being largely communal land and a small proportion of commercial farmland. The park covers some beautiful scenery including some spectacular balancing rocks and impressive views along the Thuli, Mtshelele, Maleme and Mpopoma river valleys. Part of the national park is set aside as a 100 km² game park, which has been stocked with game including black and white rhinoceros. The highest point in the hills is the promontory named Gulati (1549 m) just outside the north-eastern corner of the park.

History of the park

The national park is the oldest in Zimbabwe, established in 1926[1] as Rhodes Matopos National Park, a bequest from Cecil Rhodes. The original park borders extended well to the south and east of the current park. These areas were redesignated for settlement as part of a compromise between the colonial authorities and the local people, creating the Khumalo and Matobo Communal Lands.[2] The park area then increased with the acquisition of World's View and Hazelside farms to the north.

The current name Matobo reflects the correct vernacular pronunciation of the area.

The Matobo Hills were designated as a UNESCO World Heritage Site in 2003. The area "exhibits a profusion of distinctive rock landforms rising above the granite shield that covers much of Zimbabwe".[3] 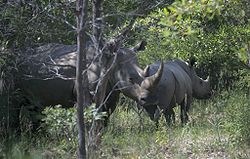 The Matobo Hills is an area of high botanic diversity, with over 200 species of tree recorded in the national park, including the mountain acacia, wild pear and the paperbark tree.[4] There are also many aloes, wild herbs and over 100 grass species.[5]

Matobo National Park has a wide diversity of fauna: 175 bird, 88 mammal, 39 snake and 16 fish species.[5] Game include white Rhinoceros, sable antelope, impala and leopard. The park contains the world's densest population of the latter,[6] due to the abundance of hyrax, which make up 50 % of their diet.[4] The game park in the west has been restocked with white and black rhinos, the former from Kwa-Zulu Natal in the 1960s and the latter from the Zambezi Valley in the 1990s. It has been designated as an Intensive Protection Zone for the two species,[7] as well as giraffe, zebra, wildebeest and ostrich.[8] 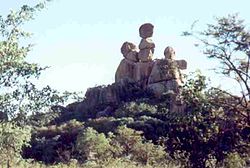 A limnological research centre has operated since 1950 at Maleme Dam[11] and researched species such as the yellow-fish Barbus mattozi.[12]

The Matobo Hills are composed entirely of granite, making up the Matopos Batholith.[13][14] The granite weathers into fantastic shapes, such as the balancing rocks known as Mother and Child Kopje. Between the granite mountains, narrow valleys form. These are often swampy valleys known as dambos or vleis,due to runoff from the whaleback mountains.[4] These valleys form the headwaters of the Maleme, Mpopoma and Mtsheleli rivers, and the source of the Thuli River is just east of the park. 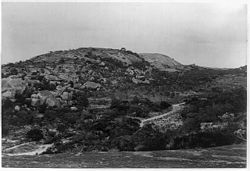 San (Bushmen) lived in the hills about 2,000 years ago, leaving a rich heritage in hundreds of rock paintings. There are over 3,000 registered rock art sites,[4] with the main periods of painting being between 320 and 500 C.E.. In the many crevices and caves, clay ovens and other historic artefacts have been found,[10] and various archaeological finds date back as far as the Pre-Middle Stone Age, around 300,000 B.P.[15][16] The following major sites have been developed for tourist access:

Bambata Cave is also a major archaeological site,[17] located in the west of the national park, north of the game park on the Kezi-Bulawayo road. The frieze includes elephants, giraffes, warthogs, tsessebe and mongoose.[18]

Inanke Cave has the most extensive paintings, located in a remote cave accessible by a three-hour hike from Toghwana Dam. Along the route of the hike is an iron age furnace.[17]

Pomongwe Cave, near Maleme Dam, was damaged by a preservation attempt in 1965, where linseed oil was applied to the paintings.[19] Archaeological digs within and downslop of the cave revealed 39,032 stone tools, several hearths, with the main fire-making areas were in the centre of the cave floor. Bone fragments showed that hyrax formed a major part of the meat component of the diet of early human inhabitants of the cave, which also included tortoise and larger game animals. The oldest material on the site is probably pre-Middle Stone Age.[15][20]

White Rhino Shelter is a small site near Gordon Park, on the main tarred road through the park. The frieze includes the outline of a large rhinos, which is said to have inspired the re-introduction of the species in the 1960s.[21]

The grandeur and stillness of the hills has contributed to their hallowed reputation, especially to the Shona and Ndebele people. Many rituals and other religious activities are performed in the hills. Before the colonial era, it was the headquarters of the spiritualist oracle, the Mlimo.

The hills were the scene of the famous indaba between white settlers and Ndebele leaders in 1896—the Second Matabele War, known in Zimbabwe as the First Chimurenga -- which ended with the assassination of the Mlimo by Frederick Russell Burnham, the American scout, in one of the Matobo caves.[22] Upon learning of the death of the Mlimo, Cecil Rhodes boldly walked alone and unarmed into this Ndebele stronghold and persuaded the impi to lay down their arms.[23] During the indaba it was also in these hills that Robert Baden-Powell, the Founder of Scouting, first learned woodcraft, the fundamentals of scouting, from Burnham.[24][25] Even today, a great deal of the pottery and artefacts found on cave floors and most of the clay grain bins in the hills are remnants from the 1896 rebellion era. There are other reminders too - bronze plaques dotted here and there in various hills mark the sites of armed forts or brief skirmishes.

Cecil Rhodes, Leander Starr Jameson, and several other leading early white settlers, including Allan Wilson and all the members of the Shangani Patrol killed in the First Matabele War, are buried on the summit of Malindidzimu, the 'hill of the spirits' -- this is a great source of controversy in modern Zimbabwe as this is considered a sacred place by nationalists and indigenous groups.[26][27] This mount is also referred to as the World’s View. (Not to be confused with the World's View, Nyanga). 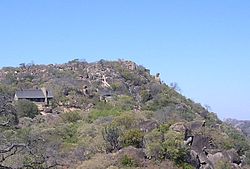 This is the main camp in the centre of the park, and hosts the park headquarters. All accommodation is self-catering. There are eighteen lodges and six chalets, the former fully equipped and the latter with communal ablutions and without crockery or cutlery. Three of the lodges, Imbila, Black Eagle and Fish Eagle, have fantastic views over the Maleme Gorge. Imbila Lodge offers a higher standard of luxury with ensuite bathrooms and teak furniture.[21] Camping and caravan sites are situated along th eastern shores of Maleme Dam.

Located in the south, this camp offers campings and caravan sites. 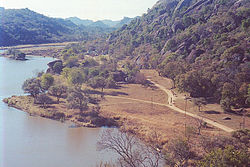 Located in the east, this camp offers campings and caravan sites.

Located in the west of Lake Matopos Recreational Park, near the Hazelside Office, this camp offers campings and caravan sites.

Located in the east of Lake Matopos Recreational Park, this camp offers campings and caravan sites.

Located in the north of Lake Matopos Recreational Park, this camp offers campings and caravan sites. 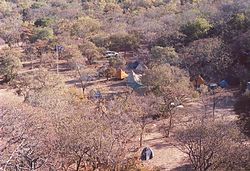 Big Cave Camp is a privately owned camp, bordering the Matobo National Park. The Camp offers four star accommodation in seven granite under thatch lodges and separate camping facilities elsewhere on the property. Activities on offer include game drives, game walks, bird watching, tours to famous rock art galleries, as well as tours to Rhodes Grave. The Big Cave property is approximately 2,000 acres (8.1 km2), and is ideal for walking and birdwatching. Facilities include a natural rock pool for swimming, the "Leopards Lair" bar and dining area which incorporates a huge granite boulder into the building,as well as separate library area.[29] 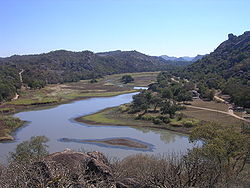 Dams such as Maleme and their environs offer opportunities for game viewing, hiking, fishing and boating.

By road from Bulawayo: Take Robert Mugabe road in the city centre; this turns into Matopos Road which continues south some 30 km to the park boundary. This is a two-lane tarred road. A single lane tarred road continues to Maleme Dam and Rest Camp. The remaining roads in the park are gravel or earth, but suitable for most vehicles. However, access to Toghwana Dam during the rainy season may require four wheel drive.

The park can also be reached from Gwanda: taking the Thuli-Makwe road towards Kezi and turning north on the main Kezi-Bulawayo road.

Some game can be seen throughout the park, with regular sitings of white rhino, sable antelope and impala. However, the best viewing is to be had in the 105 km2 Game Park, in the west of the national park. The game park, also known as Whovi or Hove Wild Area was established with animals translocated from the border areas of Hwange National Park.[31] It has been restocked with white and black rhinos.[32] Other animals to be seen include sable antelope, giraffe, zebra, impala, wildebeest and ostrich. On rare occasion in the late afternoon to early evening visitors, can be lucky enough to spot leopard, with many nights being disturbed by the ruckus of baboons screaming due to leopard attacks. There are two game viewing hides. 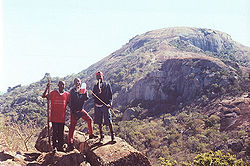 A group of Boy Scouts hiking up Nyahwe mountain with Shumbashawa mountain in the background.

Accompanied hikes, with an armed game scout are available from Maleme Rest Camp[21] 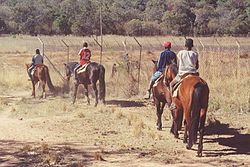 Supervised horse trails are arranged by the Parks and Wildlife staff.[33] There are two routes:

The many dams in the park allow for pleasant fishing, notably for Tilapia and bass, without the risk of crocodiles. Bass were stocked into seven of the parks dams from the research station at Maleme Dam.[11] The park entry fee includes a fishing license.[8]

Boating is possible on the larger dams, such as Maleme, Mtshelele, Toghwana and Lake Matopos. Privately-owned boats are permitted subject to approval of the parks' officials.[8]

A Zimbabwean cheese has been named Matopos, after the hills.[34]

The name of the park has been used twice in films: According to director Stéphanie Machuret, the title and landscape in her 2007 film Matopos, about a traditional healer, were inspired by the park.[35][36] The name was also used for the fictional Democratic Republic of Matobo in the film The Interpreter.