No frills
This article is about the marketing concept. For other uses, see No-frills (disambiguation).

No-frills or no frills is a term used to describe any service or product for which the non-essential features have been removed to keep the price low. The use of the term "frills" refers to a style of fabric decoration. Something offered to customers for no additional charge may be designated as a "frill" - for example, free drinks on airline journeys, or a radio installed in a rental car.[1] No-frills businesses operate on the principle that by removing luxurious additions, customers may be offered lower prices.[2] Frills or tassles on a carpet are not necessary but make the rug look fancy. Frills on any goods are not necessary but are a luxury. No frills means to live without certain luxuries.

Common products and services for which no-frills brands exist include airlines, supermarkets, vacations and vehicles. 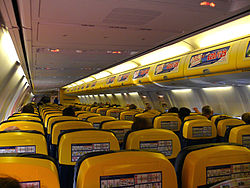 No-frills airlines are airlines that offer low fares but eliminate all non - essential services, such as complimentary drinks snacks, in - flight entertainment systems, business-class seating etc. A no-frills airline will typically cut overheads by flying from more remote airports (with lower access charges) and by using one single type of aircraft.[2] Aircraft cabin interiors may be fitted out with minimum comforts, dispensing with luxuries such as seat-back video screens, reclining seats and blinds; some airlines choose to carry advertising inside the cabin to increase revenue.[3]

Some airlines also extend the definition of "frills" to include standard services and conveniences; for example, a no-frills airline may charge passengers an additional fee for carrying luggage,[4] using the airport check-in desk,[5] using wheelchairs[6] or even for using the toilet.[7]

No-frills holidays (vacations in American English) are holidays which, like no-frills airlines, do not include unnecessary services such as:

Such holidays usually have a simple fare scheme, in which fares typically increase during peak seasons, and also as more people sign up for the holiday. This rewards early reservations, and is known as "yield management".

Examples of no-frills holiday companies are: 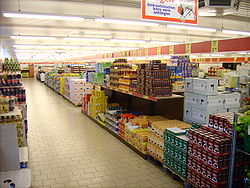 The aisles of a no-frills supermarket in Germany

No-frills supermarkets are recognisable by their store design and business model.

Examples of no-frills supermarkets are:

In the United States, a no-frills automobile model typically has a minimum of convenience equipment, a less powerful engine and spartan trim.

Frequently, these models represent the lowest-priced version of a larger selection of more lavishly equipped and trimmed models of that same car. Often, the less-expensive models are sold with a manual transmission and have a shorter options list.

One of the more famous no-frills cars was the Studebaker Scotsman, which was on sale from 1957 to 1958. These cars came with a low-grade cloth-trimmed front seat and contained only a driver's side sunvisor, no door armrests and painted trim (in lieu of chrome trim); even routine convenience items, such as a cigarette lighter and dome light were deleted. Buyers were allowed to buy only a low-cost heater and a few other trim and convenience items from a short options list; a radio was not offered as an option on this model (unlike Studebaker's more expensive models).

During the 1960s and early 1970s, American automakers offered several trim levels of full-sized models (each having a different name), with a price-leading no-frills versions. Examples included the Chevrolet Biscayne, Ford Custom 500, and Plymouth Fury I. While ostensibly targeted toward fleet buyers and business customers where luxury is not a concern, these cars were also available to private customers.

During the gasoline crisis of the 1970s, many American automakers began offering no-frills models on their compact lines of cars (such as the Ford Pinto MPG, and Plymouth Duster "Feather Duster"). As before, these models usually had spartan trim (vinyl seats with rubber floor covering); fewer convenience items than the more expensive models (i.e. no cigarette lighter); lighter-weight components (such as aluminum on various engine, body and suspension components); and a manual transmission.

Most no-frills cars are sold to fleet buyers, such as taxi companies or police departments. However, these models are generally available to cost-conscious private customers whose primary concerns were price, fuel economy and basic low-cost transportation. 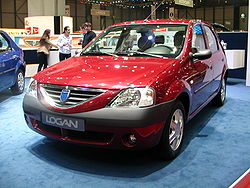 The concept of a no-frills car in the European market was common in the fifties with cars such as the Ford Abeille or the Citroën ID Normale. The Dacia Logan is a remarkable example of a recent no-frills car in Europe. Another example is Fiat Albea.

In Argentina and Brazil, the no-frills category takes a considerable share of the new car market. Costs cuts in base versions are listed, but not limited to:

While cost cuts are clearly visible in nearly any Mercosur car, the most aggressive form of no-frills cars available are the supermini and city cars sold at the Mercosur markets, notably the Chevrolet Celta, Chevrolet Corsa, Fiat Uno, Fiat Palio, Ford Ka and Volkswagen Gol. Those cars tend to be noisy and feature cost cuttings like: