GameStop
For the website with a similar name, see GameSpot.

Logo of retailer Software, Etc. on a 5.25" floppy disk branded by the company

GameStop traces its roots to Babbage's, a small software retailer that started in Dallas, Texas in 1984. The movements that made Babbage's into GameStop started in 1994 with a series of mergers between Babbage's and several other software retailers. in 1994.[9] A merger with FuncoLand stores (who owned Game Informer magazine) followed in 2000, as well as one with Electronics Boutique in 2005. Internationally, there was a merger with the Gamesworld franchise in Ireland and in the United Kingdom in 2008, and a merger with French-based Micromania.[citation needed]

When Babbage's first merged with Software Etc. in 1994 [9] the combined company was named NeoStar Retail, but the two halves continued to operate as if they were separate entities.

The combined management of the newly formed entity developed a classic case of the right hand not knowing what the left was doing. This ultimately caused NeoStar to go into Chapter 11 reorganization in early fall of 1996. At this point the company had approximately 800 stores in the United States. Several potential buyers of NeoStar's assets emerged. 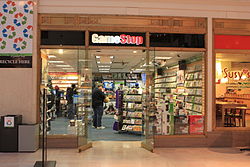 On the last day of the manager's conference there was a special guest during the meeting. Leonard Riggio, the head of Barnes & Noble, announced that he and a group of investors were going to put in place the financing to keep the company afloat, and get new merchandise into the stores in time for Christmas (at this point, the company's creditors were owed so much back revenue that they were no longer shipping anything to NeoStar).

In a personal comment during the address, Riggio stated that he "hated" the name NeoStar Retail, and thought that the merged Babbage's/Software Etc. should have been called Babbage's Etc. He said should his buyout bid be successful that the company would be renamed.[citation needed]

From the potential buyers, the judge desired to accept the offer from the one that would keep the most people working, preserve the most competition and consumer choice, and be the most stable. Ultimately, Riggio's offer was accepted on the day before Thanksgiving. Barnes & Noble, through B. Dalton, was the original owner of Software Etc. A new management team largely composed of former Software Etc. executives and long time associates of Len Riggio was put in place to run Babbage's.[citation needed]

On November 12, 2004, GameStop spun off from Barnes & Noble; at that point the company had approximately 800 stores in the United States. Due to Riggio's involvement, GameStop and Barnes & Noble employees still received employee discounts at each others' stores, despite the companies being completely separate; both companies chose to terminate this arrangement on September 1, 2010.[citation needed]

In October 2009 Leonard Riggio, chairman of the board at Barnes & Noble and director at GameStop sold 2.3 million shares of GameStop for $60.2 million. Riggio still retains 9.1 million shares in the game retailer.[citation needed]

On November 29, 1996, approximately 100 Babbage's and Software Etc. stores closed their doors. The remaining merchandise from these stores was shipped to 100 of the remaining stores that would participate in a massive "going out of business" sale throughout December. These 100 stores would close for the last time on Christmas Eve, and all merchandise left would be shipped back to corporate headquarters by New Year's Eve. The company would be pared back to about 600 of its best performing stores.[citation needed]

On April 18, 2005, GameStop and EB Games announced that they had entered into a "definitive agreement and plan of merger". After shareholders and US regulatory agencies approved the merger, it closed on October 10 of that year with the agreement that the companies would be run separately, but not as they had been in the past. To ease the transition process of the two companies being run as one, it was agreed upon that the two separate entities would not merge operating activities until the new fiscal year which starts February 1; this also included maintaining two separate distribution centers. At the beginning of the following year, operating activities of the two companies was integrated, starting with the realignment of districts and the closure of EB's West Chester, PA corporate office.[citation needed]

Acquisition of Spawn Labs and Impulse

On March 31, 2011, it was announced that GameStop Corp. acquired the peer-to-peer playing service, Spawn Labs, and the game distribution platform, Impulse from Stardock.[10]

Acquisitions in other countries

On April 6, 2008, GameStop Corp. officially purchased 51 stores from the Dutch entertainment company Free Record Shop. Throughout the summer of 2008, most of the stores were rebranded to GameStop.[11]

In October 2008, GameStop announced it would purchase France’s leading video-game retailer, Micromania, from the L Capital equity fund for $708 million, including debt.[12] The purchase of Micromania added 332 locations (boosting locations in Europe to 1,077 total) and expanded GameStop into France for the first time. It was announced that Micromania President Directeur General Pierre Cuilleret would keep his current post.[13][dead link] GameStop financed the purchase with cash on hand, credit, and $150 million loan from Bank of America.[14][dead link]

Other brands and concepts

Game Informer is a magazine owned by GameStop, Inc. and primarily sold through subscriptions which can be purchased at GameStop locations. Purchasing a subscription to the magazine also gets the subscriber the PowerUp Rewards card, GameStop's customer appreciation card. This increases all store-credit trade values by 10%, discounts all used accessories and games by 10%, gives new PowerUp members a coupon for 'Buy 2 Get 1 Free' on pre-owned games / accessories, enters them twice for the Epic Rewards Givaway for each purchase, gives the cardholder opportunities to gain points with their purchases and redeem them for rewards and gains them access to special content on the Game Informer website.

GameStop sells used games that are traded in by customers for store credit or currency (20% less than credit ).[15] This practice has recently come under fire from game publishers and developers as they make no money from these sales.[16]

Game Publishers have begun to obtain more pre-orders by including exclusive in-game bonuses, available only if the player pre-ordered the game. Bonuses typically include extras such as exclusive characters, weapons and maps. For example, GameStop included an additional avatar costume for Call of Duty: Black Ops when it was released in November 2010, and a pictorial Art-Folio for Metroid: Other M. Soundtracks, artbooks, plushies, figurines, posters, t-shirts, etc. have also been provided as pre-order bonuses.

GameStop's check out policy allows employees "to check out one item of store merchandise for personal use for up to four days", with the intent being to allow the employee to evaluate the game and learn about its content. When returned by the employee, the game that had been "checked out" is repackaged and sold as a new item, although it has already been used. The Federal Trade Commission may be in the process of investigating the selling of gutted and check out games as new to determine if any laws were broken.[19][20]

Gamestop has frequently been criticized by game developers and publishers for the retailing of used game titles.[25] By reselling used copies at a small discount on the same shelf space as new copies of the game, it is argued that Gamestop is taking profits directly from organizations such as developers and publishers which are solely dependent on their intellectual property for revenue. The motion picture industry prohibits selling second-hand copies of films in the same retail space as new, full-priced copies of films, but for the game industry there are no such established protections. In effect, this means that companies such as GameStop can resell used copies of a game within days of the title's release and keep all of the profit, thereby cutting directly into the critical initial sales which would otherwise go to publishers and developers.

As a contrast, Digital distribution methods such as Valve Software's Steam and Microsoft's Games for Windows – Live allow users to download and use an instance (copy) of a game title that is unique to that particular user without the physical media that can be resold. Based on factors such as purchase time frame and the user's geographical location, games purchased through digital distribution methods may or may not be less expensive than physical copies purchased at brick and mortar retail stores.