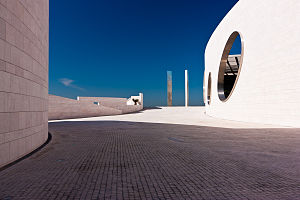 The Champalimaud Centre for the Unknown.

The Champalimaud Foundation is a private Portuguese biomedical research foundation, which aims to support the biomedical sciences, focused in particular, on the fields of neuroscience and cancer. In addition, the foundation's António Champalimaud Vision Award carries one of the highest monetary prizes (1 million Euros) of any science prize and is, financially, the World's largest in the field of vision. The Champalimaud Foundation is headquartered in Lisbon.

The Champalimaud Foundation's high-tech research center, which opened in 2010 at the mouth of the River Tagus in Lisbon, features diagnostic and treatment units for cancer patients on the lower floors and research labs above, aimed at research on cancer and neuroscience.[1]

The Champalimaud Foundation's focus is on the fields of neuroscience and oncology. In 2007, the Champalimaud Neuroscience Programme[2] was created to support researchers working in this area. On October 5th 2010 the Foundation inaugurated a clinical and research centre in Lisbon - the Champalimaud Centre for the Unknown - which will support work in both of the aforementioned fields.

Acting President — Maria Leonor Beleza is a graduate of the University of Lisbon Law School, where she has also worked as an Assistant Professor. During a distinguished professional career she has held a number of high-profile public offices. Among other positions, she was Secretary of State of the Presidency of the Cabinet (1982–83), Secretary of State for Social Security (1983–85), and Minister of Health (1985–1990) in the Portuguese Government. She has been elected as a Member of Parliament on several occasions and on two occasions she has served as Vice-President of the Parliament (1991–94, 2002–05). In addition to her prominent role in public affairs Dr Beleza has also played an active role in the private sector.

Leonor Beleza is currently the Chairman of the Portuguese League for People with Physical Disabilities, Chairman of the Advisory Board of the D. Pedro IV Foundation, and a member of the General Councils of the CEBI Foundation and of the Gil Foundation. She is also a vigorous campaigner for women’s rights, a cause she has supported for many years. In 2004, Leonor Beleza was appointed President of the Champalimaud Foundation by the will of Mr António Champalimaud. She is joined on the Champalimaud Foundation Executive Committee by João Silveira Botelho and António Horta-Osório.

The Champalimaud Foundation recognises outstanding contributions to research in vision and associated areas through an annual award of € 1.0 million. The Vision Award has a strong bias towards work that has provided major breakthroughs in the understanding of vision or in the alleviation of visual impairment and blindness.

The award is given alternatively between contributions to overall vision research and contributions to the alleviation of visual problems, primarily in developing countries. The recipients of the award are productive research groups rather than single individuals and this may involve groups from more than one institution or discipline.

The winner of the award is chosen by a jury panel consisting of both high profile public figures and esteemed scientists. The members of the jury are:

On the 30th June 2007 it was announced [1] that the António Champalimaud Vision Award [2] had been won by the Aravind Eye Care System. Established in 1976 with the mission of eliminating needless blindness, Aravind is the largest and most productive eye care facility in the world and is based in Madurai, India. From April 2006 to March 2007, including the work done in the Managed Eye Hospitals, over 2.3 million out patients were treated and over 270,444 surgeries were performed.

Today, the Aravind Eye Care System encompasses five hospitals, a manufacturing centre for ophthalmic products, an international research foundation and a resource and training centre that is revolutionising hundreds of eye care programs across the developing world.

On 9 September 2008, it was announced that Jeremy Nathans and King-Wai Yau from Johns Hopkins University, had won the 2008 prize for their outstanding contributions to vision research.

It was announced on 4 September 2009, that Helen Keller International won the prize.

On 11 June 2010, it was announced that Anthony Movshon, New York University, and William Newsome, Stanford University, were the recipient of the 2010 award –- the two men are credited with having begun solving the mystery of visual perception, for their "remarkable work on the role of the brain in reconstructing images and the way we act and understand the world"[3].