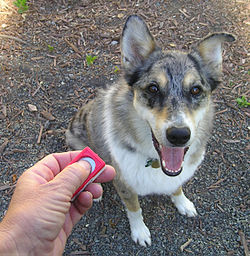 Clicker training is an operant conditioning method for training an animal using a clicker, or small mechanical noisemaker, as a marker for behavior. The method uses positive reinforcement - it is reward based. The clicker is used during the acquisition phase of training a new behavior, to allow the animal to rapidly identify that a behavior is sought and also the precise behavior of interest.

Clicker training was originated through Marian Bailey (née Kruse) and Keller Breland, who as graduate students of psychologist and eminent behaviorist B.F. Skinner taught wild-caught pigeons to "bowl" (push a ball with their beaks) while participating in military research.[1] According to their work, animal training was being needlessly hindered because traditional methods of praise and reward did not inform the animal of success with enough promptness and precision to create the required cognitive connections for speedy learning. Similar methods were later used in training at least 140 species including whales, bears, lions, chickens and domestic dogs and cats, and even humans (TAGteach).[2][3][4][5]

After participating as research students with Skinner in pigeon behavior and training projects during World War II,[9] the Brelands left graduate school and formed the first company to intentionally use operant conditioning, Animal Behavior Enterprises (ABE).[2] They created the first free-flying bird shows and a host of commercial animal exhibits.[10]

Bob Bailey was the US Navy's first Director of Training[2] and later came to work at ABE in 1965. Keller Breland died in 1965 and Marian married Bob Bailey in 1976. Together they continued the pioneering work at ABE. Radio-carrying cats were steered through cities and into buildings under a contract with the CIA. Dolphins located targets many miles from their trainers, at sea. Ravens and other birds, carrying cameras and directed by lasers, could fly to a specific window of a skyscraper and photograph the people inside. Gulls, expert sea searchers by nature, could locate and report life rafts and swimmers far offshore.[11]

One of the challenges in training an animal is communicating exactly when the animal has done the behavior that the handler is attempting to reinforce. As a simple example, consider teaching a dog to turn in a circle (spin). At the instant that the dog completes the turn, the handler must let the dog know that it has done the correct thing. However, the traditional "good dog!" takes so long to say that the dog might already have moved on to some other behavior. At the least it is not immediately obvious that the "good boy" is earned at the precise moment of completing a circle. By the time the dog realizes it is being praised, it might be sitting and scratching or looking for something else to do. In the laboratory behavioral researchers including Norm Guttman, Marian Kruse and Keller Breland, realized that rats always stop what they are doing when they hear the hopper make a sound indicating it was beginning to deliver food, and they tend to do more of what they were doing when the sound occurred. Under the instruction of B.F. Skinner, they decided to try using a sound to mark behavior outside the operant chamber. Toy crickets, the earlier equivalent of today's clicker, were common in those days, and served the purpose very well. The clicker is likened to the surgeon's scalpel; it allows for precise timing and clear communication about what specific behavior is being reinforced, and enables the trainer to teach complex and difficult skills to the animal without the use of force or punishment.

As this type of training was practiced and improved upon, it became apparent that the variability of the human voice, and its presence during all activities make it a less than salient tool for marking behavior. Besides the imprecision in timing, using the trainer's voice for feedback means that the actual sounds for feedback will vary. A handler's voice, pronunciation, tone, loudness, and emphasis may change even during the same training session. Clicker trainers believe that it is better to use a "click" sound to avoid variations in sound. Many trainers opt to use clickers for training that requires precision and continue to use their voices in the form of praise for behaviors that do not need to be precise.

There is also some circumstantial evidence[citation needed] which suggests that the sound of the clicker is the kind of stimulus — like a bright flash of light or a loud, sudden sound — that reach the amygdala (the center of emotion in the brain) first, before reaching the cortex (the thinking part of the brain). Clicker trainers often see rapid learning, long retention and a "joy" response to the sound of the click in the learning animal. This idea is not universally accepted, and no known research has confirmed it. Any reinforcer can produce joyful behaviors in learners if delivered correctly.

Tasks learned with the clicker are retained even years after the fact and with no additional practice after the initial learning has taken place. This is probably due to the fact that the animal participates fully in the learning process and applies itself to it, learning by trial and error rather than acting out of habit or a momentary response to a situation. Clicker–trained animals become great problem–solvers, develop confidence, and perform their work enthusiastically. This retention of learning is present in positive reinforcement training (including but not exclusive to clicker training), but does not happen with any regularity with correction-based training.

The marker can be any signal that the animal can perceive, so long as the signal is brief (to prevent the problem of imprecise timing) and consistent (to prevent the problem of variations that may confuse the animal). For large sea animals the marker is usually a whistle rather than a clicker. However, not all conditioned reinforcers are sounds. Goldfish and birds such as falcons and hawks can be trained using a quick flash of a flashlight as their "clicker".[citation needed] Deaf dogs can be trained with a vibrating collar.[12]

As pointed out by Lindsay the advantages of the clicker may be particularly strong in some situations: "...the clicker's simplicity and clarity provide a significant advantage for some training activities..." [13]

There are several common objections posed to clicker training. Proponents assert that while most of these can be a problem for the unskilled clicker trainer, these are all avoidable.

The first step in clicker training is to teach the animal that the clicker sound means that they will get a primary reinforcer, usually food. To do this, some trainers "charge" or "load" the clicker. To do this the trainer clicks the clicker and immediately thereafter gives the animal a reward, usually a tasty treat, one small enough to be consumed almost instantly. Some animals tend to learn the association much more quickly than others. Progress may be tested by waiting until the dog's attention is elsewhere and then clicking. If the dog immediately looks toward the trainer as though expecting a reward, it is likely that the dog has made the association.

Other trainers, including Bob Bailey and the ABE Trainers, simply start training a behavior and following desired approximations with a click. ABE conducted experiments that demonstrated that for their purposes, where they may be training many animals at the same time, this method was more efficient.[29] Today many clicker trainers use this method of introducing the clicker.

After that, the trainer uses the clicker to mark desired behaviors as they occur. At the exact instant the animal performs the desired behavior, the trainer clicks and promptly delivers a food reward or other reinforcer. One key to clicker training is the trainer's timing; clicking slightly too early or too late rewards and therefore may reinforce whatever behavior is occurring at that instant. The saying goes, "you get what you click for."

Clicker trainers often use the process of "shaping," which means gradually transforming a specific behavior into the desired behavior by rewarding successive approximations to it. A successive approximation is "a behavioral term that refers to gradually molding or training an organism to perform a specific [completed] response by [first] reinforcing responses that are similar to the desired response."[30] Clicker trainers learn to split behavior instead of lumping it, i.e. to look for and reward small steps in the right direction rather than waiting for the whole, "perfect" behavior to appear on its own. It is important to create opportunities for the animal to earn rewards very frequently. A reinforcement rate of one click/treat (C/T) every two to three seconds is common among professional dog trainers. Criteria for receiving the click is tightened gradually, at the rate the animal is comfortable with and so that it will remain successful. 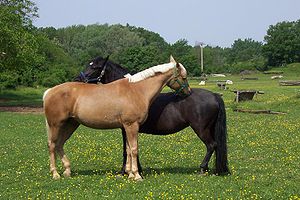 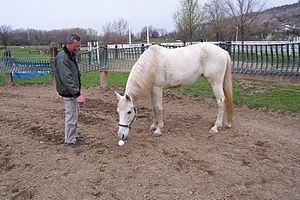 Many desired behaviors start with the nose-touch, where the dog learns to touch an identified target, such as a small piece of plastic, with its nose; that behavior can then be transported to perform useful tasks or interesting tricks such as flipping a light switch or ringing a bell to go outside.

Training the nose touch begins with getting the dog to touch a target with its nose; trainers sometimes use a guided method, such as placing a dab of peanut butter on a small plate or plastic target; others prefer shaping, where the target is placed in easy reach, such as in the trainer's hand between the trainer and the dog, and the dog is rewarded each time he moves in the target's direction or actually touches it.

Targeting for Horses: For horses, loading or charging the clicker is usually not done. It's best for horses that a clear marker is used so that the horse does not expect "unearned" treats.