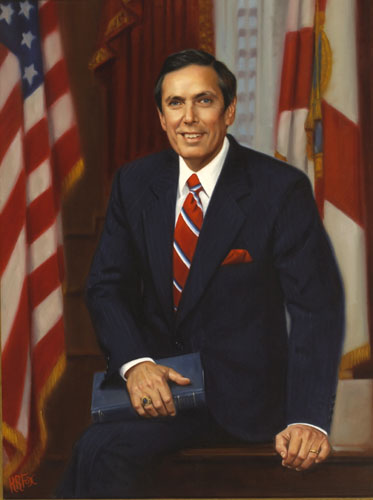 Robert "Bob" Martinez (born , in ) was the fortieth governor of from 1987 to 1991 and the grandson of Spanish immigrants. [ [http://www.floridagovernorsmansion.com/index.cfm?section=people&administrationID=7 Florida governors mansion] ] . Prior to that, he was the from 1979 to 1986.

Bob Martinez received a from the and went on to earn a master's in labor and industrial relations from the University of Illinois. In the late 1960s, Martinez returned to Tampa to teach.

Martinez became involved in the Hillsborough County Classroom Teachers Association, the local teacher's union, and was named the executive director of the HCTA in 1966. [http://www.sptimes.com/2008/01/12/Hillsborough/He_found_his_voice_sp.shtml] In 1968, the Hillsborough CTA supported the Florida Education Association's call for a state wide teacher resignation in support of more education funding and collective bargaining rights for teachers. Though the labor action was seemingly unsuccessful in the short term, it eventually set the stage for better salaries and better relations between teachers and the state. [http://www.sptimes.com/2002/03/25/State/Once_mighty_teacher_u.shtml]

Martinez ran successfully for the office of in 1979. While Mayor, the city built one of America's first refuse to energy plants, a performing arts center, convention center, reconstructed the zoo, restored the 1915 City Hall building and annexed thousands of acres of undeveloped land that became new Tampa.

Although the mayor's office is nonpartisan, Martinez was known to be a Democrat. However, in 1983, he changed his affiliation to Republican. In 1986, he resigned as Mayor to run for governor. He won the election, becoming only the second Republican elected to that office since Reconstruction and the first (and thus far, only) to serve as governor of Florida. Martinez was inaugurated on , .

As governor, Martinez initiated America's largest environmental land acquisition program, Preservation 2000. He proposed the Surface Water Improvement Management act that protects Florida’s surface waters, including , , Lake Jackson, the , and other areas. He helped get Florida's first solid waste management law passed and implemented Florida's Growth Management Act. He was an advocate of laws and rules that protected s and dolphins. He aggressively sought to eliminate wasteful spending projects sponsored by members of the legislature, and increased spending on the state’s drug control programs. For a time, Martinez was regarded as a "rising star" in Republican .

In 1987, following the destruction of the Space Shuttle Challenger, Martinez appointed a number of aerospace industry and community leaders to the "Florida Governor's Commission on Space." This concept was undertaken by Stephen Lee Morgan, vice chairman and executive director of the Florida Space Business Roundtable, Inc., a non-profit organization of Central Florida aerospace industry executives. Martinez appointed Martin Marietta executive A. Thomas Young as chairman of the Commission, with then-Florida Secretary of Commerce Jeb Bush (later Governor of Florida himself), as vice chairman. The Commission was widely hailed as a leader in the arena of state-sponsored economic development initiatives in the aerospace industry, and led to the establishment of the Spaceport Florida Authority, following the release of its formal report, "Steps to the Stars" in 1988 (drafted under the direction of the Florida Department of Commerce's Dr. Chris Shove). While now defunct, the Florida Spaceport Authority did orchestrate several commercial launches from unused launch facilities at Cape Canaveral, Florida, including America's return to the moon with an unmanned orbiting vehicle aboard a Lockheed Martin rocket, the Athena (then called the "Lockheed Launch Vehicle" or "LLV"). The Authority was succeeded by an organization known as "Space Florida." The purpose of the Commission was to identify approaches and specific actions which the State might take to mitigate Florida's reliance on the Space Shuttle program as an employer in the space industry. Results were mixed, with some successes and a number of programs which bore little fruit.

However, Martinez hit a bump in the political road. In order to raise more revenue for the state, the passed a on services with Martinez's support. [ [http://www.tbo.com/news/metro/MGBQ535MQ2F.html State Income Tax: Why It Won't Happen In Florida ] ] . The response from Floridians was strongly negative, so only two months after the tax went into effect, Martinez called the legislature back for a special session to repeal it. [ [http://query.nytimes.com/gst/fullpage.html?res=9B0DEED81F31F93AA2575AC0A961948260&n=Top%2FReference%2FTimes%20Topics%2FSubjects%2FS%2FSales%20Tax Governor Acts to End Florida Tax - New York Times ] ]

Though the tax was repealed [ [http://query.nytimes.com/gst/fullpage.html?res=9B0DE3D61130F933A25751C1A961948260&n=Top%2FReference%2FTimes%20Topics%2FSubjects%2FS%2FSales%20Tax Tax Repeal Is Passed In Florida - New York Times ] ] and replaced by a traditional sales tax on goods, the perceived flip-flop on the issue seriously hurt the governor's credibility among Floridians and reduced his ability to get his initiatives enacted. [ [http://www.tbo.com/news/metro/MGBQ535MQ2F.html State Income Tax: Why It Won't Happen In Florida ] ]

Two years later, in 1989, after a U.S. Supreme Court ruling allowed states greater flexibility to restrict abortions, Martinez called the Florida Legislature into special session in an effort to pass anti-abortion laws. None of the governor's proposals made it out of committee and his approval ratings sank to around 24%.

In 1989, Martinez ordered state prosecuters to determine whether -area rappers 's album violated Florida obscenity laws. As a result, record store owners were arrested for selling the album and members of the group were arrested after a concert. [ [http://query.nytimes.com/gst/fullpage.html?res=9C0CEFD61130F934A25753C1A966958260&sec=&spon=&pagewanted=all NY Times article on obscenity controversy] ]

In 1990, Martinez was defeated in his bid for re-election by Democratic .

After leaving the governor's office on , , Martinez was appointed by President to the cabinet rank position of Director (or "Drug Czar") of the Office of National Drug Control Policy where he served until January 20, 1993.

Since then, Martinez has served as a consultant to Florida-based law firms [http://www.flsenate.gov/cgi-bin/view_page.pl?Tab=welcome&Submenu=2&File=biographies.html&Directory=welcome/senate/drug_summit/1999/] and is a political analyst for television. He is a trustee of the , and a director of the Hillsborough Education Foundation, Tampa's and the Tampa Bay History Center, all local nonprofit groups involved in some way with education.

* [http://dhr.dos.state.fl.us/museum/collections/governors/about.cfm?id=47 Official Governor's portrait and biography from the State of Florida]