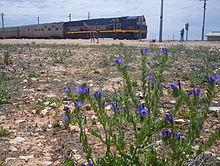 The Indian Pacific at Cook

Cook is a railway station and crossing loop on the standard gauge Trans-Australian Railway from Adelaide to Perth, with no inhabited places around.

The town was created in 1917 when the railway was built and is named after the sixth Prime Minister of Australia, Joseph Cook. The town depended on the Tea and Sugar Train for the delivery of supplies, and is on the longest stretch of straight railway in the world, at 478 km which stretches from Ooldea to beyond Loongana. When the town was active, water was pumped from an underground Artesian aquifer but now, all water is carried in by train. Attempts have been made to introduce trees and other vegetation, but these have not been successful.

Today, it is said to have a resident population of four, and is essentially a ghost town. The town was effectively closed in 1997 when the railways were privatised and the new owners did not need a support town there, although the diesel refuelling facilities remain, and there is overnight accommodation for train drivers. Cook is the only scheduled stop on the Nullarbor Plain for the Indian Pacific passenger train across Australia and has little other than curiosity value for the passengers. The bush hospital is closed, and the shop is only opened while the Indian Pacific is in town. It has a few houses and fuel tanks for the locomotives. The crossing loop can cross trains up to 1800 m long.

An interview with a resident from ulivewhere.com revealed they use the WA and SA time zones, for the WA and SA people, so they do not have to have to adjust their watches, except there is a time difference of around two or three hours. When the railway was sold, 8 transportable houses were taken away and made into holiday houses on the coast. There are apparently no children in the town.