Saint-Jean-de-Luz (Basque Donibane Lohitzun) is a commune in the Pyrénées-Atlantiques department in south-western France. Saint-Jean-de-Luz is part of the province Basque of Labourd and the Basque Eurocity Bayonne - San Sebastian .

Saint-Jean-de-Luz bay is situated to the east of the Bay of Biscay. It is the only sheltered bay between Arcachon and Spain. Thanks to its strong sea walls or dykes that protect the town from the full savagery of the Atlantic ocean, it has become a favourite for bathers across the Basque Coast. The seaside resort itself, is, relatively recent, however, the port itself is old. 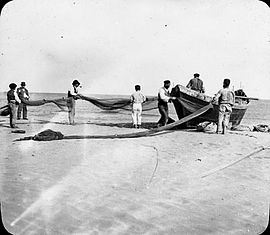 Water from the area flows into the town[1] from the Nivelle and its smaller tributaries, the Etxeberri, d' Isaka and Xantako streams. There is also the Basarun, and its smaler tributary the Mendi, which passes directly through Saint-Jean-de-Luz. The river has been made accesible to boats and it joins the sea by the Erromardia beach. A branch of the Uhabia, an emblematic river in the neighbouring Bidart district, and its smaller Amisola tributary, also pass to the sea through St Jean de Luz.

How to get there

Located on the Atlantic coast, just a few kilometres from Spain, Saint-Jean-de-Luz's wealth stems from its port and its past, with the town being associated with either fishing or from the capture of vessels by its own Basque corsaires, or pirates. This prosperity reached its height during the 17th Century, which is still considered as the town's "Golden Age." During this period, Saint-Jean-De-Luz became the second largest town in the Labourd region with a population or around 12,000, just behind Bayonne.

Saint-Jean-de-Luz is known for its royal wedding connection. In 1659, Cardinal Mazarin spent several months in Saint-Jean-de-Luz, from where he would embark on almost daily trips to the island of Bidassoa(near modern-day Hendaye) for Franco-Spanish meetings that resulted in the Treaty of the Pyrénées-Atlantiques, one clause of which was the marriage of Louis XIV to Maria-Teresa, the Infanta of Spain. Saint-Jean-de-Luz and its church were chosen to host the royal wedding on 9 June 1660.

The town features a large number of residences built in the 17th and 18th centuries along the Quai de L'Infante, Rue Mazarin, Rue Gambetta and at the Place Louis XIV. In some respects this is testament to the families, shipowners and Basque merchants from this period. One of these, built alongside the Quai de L'Infante around 1640, is called the "Maison Joanoenea," and it is here that the Queen Mother, Anne of Austria, stayed before the royal marriage on 8 May 1660, followed by the Infanta of Spain on 7 June. Locally this house is referred to as the "Maison de l'Infante", and it has become a popular tourist attraction and museum. 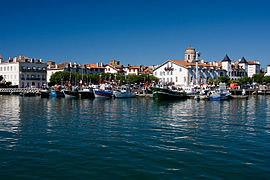 Scenic view of the fishing port

Saint-Jean-de-Luz is a fishing port on the Basque coast and now a famous resort, known for its architecture, sandy bay, the quality of the light and the cuisine. The town is located south of Biarritz, on the right bank of the river Nivelle (French for Urdazuri) opposite to Ciboure. The port lies on the estuary just before the river joins the ocean. The summit of Larrun is situated approximately 8 km (5.0 mi) to the south-east of the town. The summit can be reached by the Petit train de la Rhune, which commences from the Col de Saint-Ignace, 10.6 km (6.6 mi) to the east of the town on the D4 road to Sare. It is in the traditional province of Lapurdi of the Basque Country.

Evacuation of the Polish army by sea in June 1940

A few weeks after the invasion of France by Germany, Saint-Jean-de-Luz was the scene of dramatic events. Polish soldiers who were unable to sail for England in Saint-Nazaire flocked onto the beach and the pier in the fishing port where large ships were able to dock. The ship M / S Batory and M / S Sobieski anchored in the harbour. Local fishermen volunteered to carry soldiers back and forth between the coast and each of these two big boats. The sea was rough and the fishing boats had difficulty approaching the side of these ships to enable the men who wanted to leave to board the ship without falling into the water. It is reported that women and children were helped aboard by sailors. Diplomats and officials of the Polish Ministry of Foreign Affairs, also embarked on these ships and some French who had been inspired by the the call to continue the struggle against the Germans made by General De Gaulle a few days earlier, on June 18th. We know in detail the various movements of ships through the logs that have been preserved. The M / S Sobieski, was at the mouth of the Gironde during the June 20 and it arrived in Saint-Jean-de-Luz harbour on the night of 20 to 21. 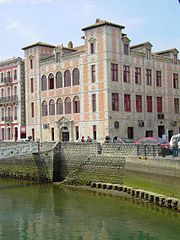 The boarding of the ship immediately took place. As for the M / S Batory, on June 21 at 7:00 am it was located at the Adour mouth and then began an approach to enter the port of Bayonne without anchor. However, on the recommendation of a British liaison officer, the ship set sail for Saint-Jean-de-Luz, where the soldiers’ units were gathered along with Polish civilian refugees. Maurice Schumann embarked on the M/S Batory. Bad weather and low clouds banished the spectre of a Luftwaffe attack and prevented another disaster along the lines of the one that had happened a few days earlier, on June 17, in Saint-Nazaire, where there were a large number of victims aboard the British liner Lancastria which had embarked with UK soldiers and civilians. 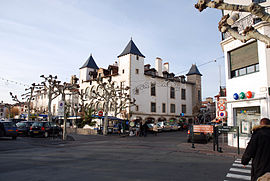 After 1945, some of the traditional fishing-based industries of the Fargeot district gradually disappeared, mainly as a result of overfishing and competition from elsewhere. This change strengthened the transformation of the town towards more luxury and tourism industries. In Saint-Jean-de-Luz (over 40% of dwellings of the town are second homes). 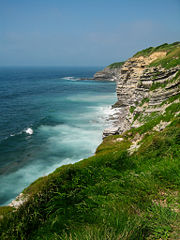 In the 1960’s the town expanded northwards (Avenue de l’Ocean) and also southwards in the direction of (the Urdazuri district). Since the 1970’s St Jean de Luz has been connected to Bordeaux to the north and Spain to the south by the motorway and more recently by the TGV railway. St Jean de Luz boasts extensive and attractive land and scenery, as well as a well preserved coastline which has so far escaped urbanisation. Indeed, some of the Basque coast has seen a degree of development but the area between Socoa and the Abbadia nature reserve and castle remain well protected. Saint-Jean-de-Luz has an excellent location and extensive land reserves that can ensure its further development. A significant portion of its coastline has so far escaped urbanization, which is exceptional, even unique (the rest of the Basque coast is indeed urbanized, apart from the Corniche, between Socoa cliff side and the Abbadia domain).

A monument in the Verdun Square honours the memory of the fallen soldiers from the two World Wars, and there is another monument dedicated to the resistance movement "Orion" which is found on the L’Infante Quai. This second plaque commemorates the importance of the work of French escape networks which helped people evade capture in Occupied France. Finally, there are some bunkers still visible along the coast. These formed part of the infamous German defences against invasion in 1944 called the Atlantic Wall. Some remains are still visible on the Santa-Barbe promenade.

Nowadays, St Jean de Luz depends strongly on tourism with safe clean beaches, notable high quality hotels and a thalassotherapie spa, swimming pools, a casino, golf courses and a new conference centre that is under construction. The town also benefits from regional tourism with many attracted by the pedestrian area full of shops open all year round. It also attracts a large number of visitors from Basque Spain or Guipuzcoa along with many from nearby Bayonne and across the rest of the south west. The city is particularly attractive to retired people, many of whom come to settle there from other areas across France. 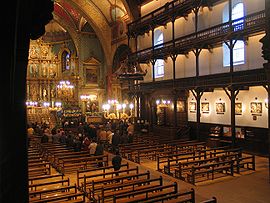 Church of St. John the Baptist

Many cultural and sporting events are held throughout the year. There are internships and public concerts of classical music organized by the Académie Ravel, usually in the auditorium of the same name. There is a film festival dedicated to young filmmakers, a surfing film festival and Basque Pelota championships.

The tradition of the Basque ‘Trials of Strength’

The origin of "Basque Trials of Strength’' is found in the daily tasks carried out across the region. For centuries, young Basque farmers pitted themselves against each other in physical challenges. Labouring in the forests of the Basque Country gave rise to the challenge known as "aizkolariak" (based on lumberjacks working with an ax or “arpanariak”), as well as athletic sawing of tree stumps and wood. The construction of buildings, often based on large stones for the cathedrals and monasteries led to the development of the challenge known as "arrijasotzaileak"- literally those who lift stones.

Several events originate from working in the fields, The best known of which is "lastoaltxatzea "the lifting of straw bales.” This is done either using a pitchfork or a pulley, and is often organized in tandem with “joko” (cart-lifting), “zakulasterka” (individual relay or sack races), and “untziketariak,” a race involving pitchers of milk. Not forgetting "soka-shot", or tug-of-war, now, which is an internationally recognised discipline celebrated in no less than fourteen countries. During the summer, there are demonstrations of ‘Force Basque,’ organised by the local Xiste organization, often at the main municipal arena in Saint-Jean-de-Luz.