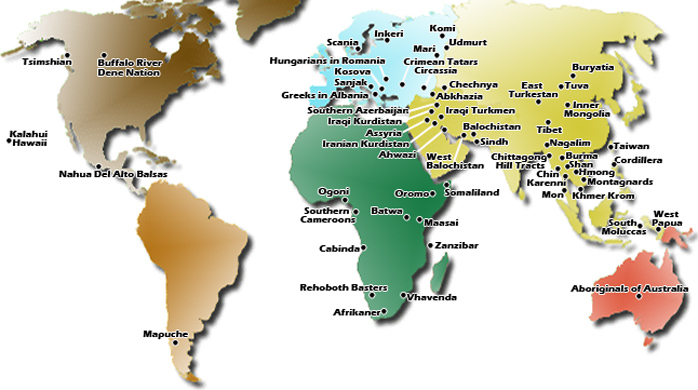 The Unrepresented Nations and Peoples Organization (UNPO), formed in 1991, is a democratic, . Its members are , occupied s, minorities and independent s or territories which lack representation internationally. The organization educates groups in what channels to use to make their voices heard, and helps defuse tensions so that frustrated groups do not turn to violence to gain attention for their demands. Some former members, like , , and the country of Georgia, have gained full independence and joined the . [Barbara Crossette, [http://query.nytimes.com/gst/fullpage.html?res=9C0CE1DB1238F93BA25751C1A962958260 Those Knocking, Unheeded, at U.N.'s Doors Find Champion] , , December 18, 1994.] [Tishkov, Valerie, [http://www.eurozine.com/articles/2005-06-01-tishkov-en.html An Anthropology of NGOs] , "Eurozine", July 2008]

UNPO aims to protect the members' human and cultural s, preserve their environments, and to find non-violent solutions to conflicts which affect them. UNPO provides a forum for member aspirations and assists its members to participate at an international level.

UNPO members are generally not represented diplomatically (or only with a minor status, such as observer) in major international institutions, such as the . As a result, their ability to participate in the , and to have their concerns addressed by the global bodies mandated to protect human rights and address conflict, is limited.

UNPO is dedicated to the five principles enshrined in its :

All members are required to sign and abide by the UNPO Covenant. They must affirm that they support the principle of nonviolencein their people’s struggle for a peaceful solution and that they apply the democratic methodology as their guiding principle. Despite of the "UN" in its acronym, UNPO is an and not an agency of the .

The following former members of the UNPO have since gained (UN) recognition:

Valery Tishov, the Director of the Institute of Ethnology and Anthropology at the and former Russian Minister for nationalities, criticized the UNPO by stating:

The UNPO's activites in The Hague took a different track when the flags of separatist regimes and organizations that emerged after the collapse of the USSR and Yugoslavia were hoisted above its headquarters. In the context of new geopolitical rivalries and western euphoria about rebuilding the post-communist world, "unrepresentedness" came to be seen as a breach of order rather than an improvement, as a process of exiting the system rather than finding one's voice within it. [Tishkov, Valerie, [http://www.eurozine.com/articles/2005-06-01-tishkov-en.html An Anthropology of NGOs] , "Eurozine", July 2008]