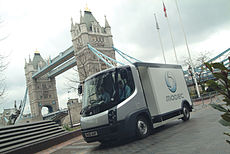 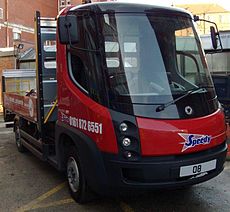 Modec was a Coventry, UK electric vehicle manufacturer, specialising in Commercial vehicles in the N2 category.[1] It unveiled its first model in April 2006 and announced its intention to commence series production in March 2007, with the first production vehicles destined for Tesco. Following a long term decline in sales, it entered administration in March 2011, with all remaining assets and intellectual property sold to Navistar International.

2002
eMercury project commenced within London Taxis International (a division of Manganese Bronze). The project was led by Jevon Thorpe, designer of the TX1London Taxi. Some development funding received from the Energy Savings Trust (EST), part of the Department of Trade and Industry.

2004
Manganese Bronze announces its decision to focus on its taxi business. The eMercury project bought by Jamie Borwick, former CEO & Chairman of Manganese Bronze, who creates Modec Limited as part of Borwick Group.

2006
Unveils next generation of production intent vehicles at SMMT Commercial Vehicle Show. Fitted with an 85 kWh battery pack, they have a 2-2.5 tonne payload, a governed top speed of 50 mph and a range in excess of 100 miles on a typical urban duty cycle. Maximum torque of 300 Newton metres is delivered from rest, resulting in lively acceleration. Zebra batteries are used.

2007
Coventry production facility officially opened by the Rt Hon David Cameron MP.
Announcement of that the first vehicles built will be delivered to Tesco for home grocery deliveries.
Center Parcs also received a fleet of vehicles at their Elveden Forest park for servicing use.
Vehicles are now operating in London with Accord, Amey, Speedyhire, Hildon Water, London Borough of Islington and others.

2008
100th Modec vehicle produced, production at the Coventry plant ramping up according to plan (maximum capacity 5,000 vehicles per annum).
London dealer network expands to 6 sites; Distributors appointed in the Netherlands and Ireland
UPS has ordered Modec electric vans for its UK and German fleets. Energy costs are play a huge part in the potential profitability of package delivery companies like UPS, DHL and FedEx.[2]

2009
Modec is the first electric vehicle in the N2 class to attain European Whole Vehicle Type Approval.[3] Modec has entered into a joint venture with Navistar International for North and South America. The Joint venture is named Navistar-Modec EV Alliance.[4]

The vehicles use an 80 kW motor and an exchangeable lead-acid battery which is charged from an external charger than requires a 32amp 3-phase supply to charge the vehicle for 6 hours, it also has options for Lithium-Iron Phosphote or Sodium Nickel chloride batteries.

Other electric vehicle makers in the UK