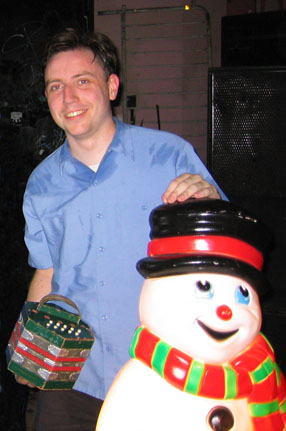 Logan Whitehurst (, – , ), was an American . His career began as the drummer for the band Little Tin Frog from 1995 until 2000, although he is best known as a founding member of n indie rock band [ [http://www.slowdance.com/thevelvetteen.php Slowdance Records :: The Velvet Teen ] ] and as a solo artist performing under the name Logan Whitehurst and the Junior Science Club.

Logan was also an accomplished graphic designer, creating numerous album covers for bands such as his sister's , in addition to , Little Tin Frog, The Velvet Teen, 20 Minute Loop, Go Time, Shut Up Donny, Santiago, and labels such as , Restitution Records, Silent Records and Entertainment, and Double Helix Records [http://loganwhitehurst.net/LW/artwork/index.html] . He also contributed illustrations and comics such as "Jonathan Quimby, the Boy with No Brain" to Section M Magazine [http://www.loganwhitehurst.net/LW/artwork/comics/quimby/index.html] .

During their stint together playing in Little Tin Frog, Logan and guitarist began secretly writing somber, serious songs. This side project came to be known as The Secret Band. Some time after the split of Little Tin Frog, The Secret Band reshaped itself and took on the name of Nagler's electronica-influenced solo project, The Velvet Teen. Adding bassist Josh Staples, the band's catalogue included several re-recorded Secret Band tracks, such as "A Reverie to Chanticleer" and "Mother of Love." The band signed with .

In 2001, the band released "+-=", an of both older songs co-written by Whitehurst and new recordings. In early 2002, the band released their first full-length album, . The album was produced and mixed by guitarist . The album's first track, "A Special Gift to You" was written solely by Logan Whitehurst. He also co-wrote all the other tracks on the album. Out of the Fierce Parade also featured Whitehurst's engravings as the cover and inside the CD booklet.

Touring in support of took Whitehurst across the country, as far east and south as , as well as out of the country with dates in Japan [ [http://www.popmatters.com/music/concerts/v/velvet-teen-040814.shtml The Velvet Teen + The Americas + Out Circuit - PopMatters Concert Review ] ] .

The band received airplay on , which played their videos for "Radiapathy" and "The Prize Fighter." [ [http://www.mtv.com/music/artist/velvet_teen/artist.jhtml#/music/artist/velvet_teen/videos.jhtml The Velvet Teen | Music Artist | Videos, News, Photos & Ringtones | MTV ] ] MTV also included portions of "The Prize Fighter" in its pseudo-reality series . The independent film also featured original music from the group.

Released in 2004, The Velvet Teen's next album, Elysium, was Whitehurst's last with the band. Shortly after recording the album, he left the band in order to undergo treatment for brain cancer. He was never able to tour in support of the album.

In addition to drumming for The Velvet Teen, he had a successful solo career as Logan Whitehurst and the Junior Science Club

Logan played not only the drums in his solo work, but also keyboards, guitar, accordion, concertina, and piano. He also provided almost all of his backup vocals through . His music has often been compared to and for its goofy, geeky subject matter as well as its underlying musicality.

In 2003, having signed with Pandacide Records, Logan released his sixth album, Goodbye, My 4-Track. The album featured guest appearances by members of The Velvet Teen, Death Cab for Cutie, , and many other bands. Logan was never able to tour nationally in support of the album due to his involvement with the Velvet Teen and, later, his illness. However, he still did local shows, going as far away as Portland, OR.

In 2004, Logan completed all of the score and incidental music for "Replica", an independent film by Raymond Daigle that illustrates the trials, tribulations and mayhem of working in a copy shop. As of July 2007, Replica is still unreleased with the exception of independent and private screenings.

In 2006, after his cancer had been declared in remission, Logan took suggestions for an enormous number of short-subject songs from his friends and fans to get himself back into musical shape. [http://loganwhitehurst.net/LW/music/VTSP/index.html] Ranging from 30 to 90 seconds, the 81 songs were recorded over the span of two months. Shortly after designing the album art and layout for the Very Tiny Songs Project, Logan's brain cancer returned. The album was released posthumously on December 26, 2006. [ [http://www.metroactive.com/bohemian/01.31.07/logan-whitehurst-0705.html Music & Nightlife in Petaluma, CA | Logan Whitehurst memorial ] ]

Logan had at least three separate identities created for the sake of his comedy.

*Vanilla The Plastic Snowman (Pictured at top)A plastic Christmas lawn ornament, Vanilla came to be something of a mascot for the Science Club. He had a ridiculously oversized ego and was constantly claiming that he did every cool thing in history and says Logan took all of Vanilla's work and said it was his own. Although he never really talked in any performances, he did have a blog he would post quite regularly. The subjects of his blog would often be random snippets of his mind, but occasionally commenting on current events. His sentences came out hilariously garbled because he claimed he was typing with mittens on so he couldn't hit the keys well.

*Farkle Announcer/ Jon-Jon the LeprechaunFor the trademark Logan Whitehurst "Farkle" commercials, he would provide the voice of an unnamed Farkle announcer who appeared to have brainwashed or bribed most of the "supporters" of the product or would even tamper with their testimony. He would always say stereotyped, but outrageous, advertisement jargon (Such as:"Wait there's more!" and "Nothing says love like the gift of Farkle."). He would always cut to Jon-Jon the Leprechaun, the official spokesperson for Farkle whould either end up screaming some nonsensical Irish warrior cry or injured in some way and damaging his "wee little hat". These commercials almost always ended with some extremely fast, hard to hear, nonsense which was defined as the fine print.
*Sid SheinbergA raspy voiced club singer from the 40's, Sid Sheinberg is often asking for money to fund his "experimenting" with booze and fast women. He seems to possess the quality of an old member of a form of the Rat Pack but with a little more independent recognition. To support this he is always singing a song he and his cousin Bernie wrote in "'48". He has actually died quite a number of times due to his lifestyle but has always survived by making various deals with the devil every time he gets sent to hell. Once the devil cut him off from immortality and was about to take his soul, but Sid took the devil's soul instead.

*Daddy and SonWith these characters Logan provided the voices of both a 10-year-old boy and his cheerfully controlling father who displayed many hang-ups. These characters were never officially named. It begins when "Son" find a monkey and brings him home in his backpack. His father tells him he can't and decides it is time for "The Talk", which in this case is a 5-minute-long piano song called:"Monkeys are bad people". It ranges in references from to and involves a harmonica solo. These roles were later reprised when "Son" was about 13 and asked for a banana. His father informs him that it is strictly "monkey-food" and doesn't belong in their "well lit, sanitized and bacteria-free home" and launches him into the song again. During this version we find that "Daddy" gave "Son" a perm. In this version he blackmails his son into playing a solo instead, by threatening his allowance. In the end there of course was no monkey but there was a tiger in his room.

*Nigel Pettijohn StinkwellA British radio interviewer for a show that echoes the style of James Lipton and Masterpiece Theater, Nigel appears to be a huge fan of Vanilla going as far as sending him very personal letters about certain subjects and fruit baskets and was astonished to find out the Vanilla had only a fictional personality.This character was only used once in a "self-interview" by Logan in order to promote the Very Tiny Songs Project.

From November 2003 onward Logan battled fatigue, headaches, dizziness, and stomach illness. In May, 2004 it was discovered that the ailments he was suffering were due to a cancerous brain tumor. Deciding to focus on his recovery, he left The Velvet Teen [cite news| url=http://www.punknews.org/article/9267| title=Velvet Teen drummer leaves band due to brain tumor| author=scott| date= May 25, 2004| accessdate=2007-01-14| publisher=Punknews.org] and put his solo career on hiatus. He spent the better part of a year and a half in treatments for the recurring . On , , Logan Whitehurst succumbed to his illness at his home in Los Banos, California. [ [http://www.portlandmercury.com/portland/Content?oid=89347&category=32741 Music - Once More With Feeling - once more with feeling - Portland Mercury ] ]

From many donations, the fledgling Remember Logan Foundation came to be. [http://www.rememberlogan.org] Created by his fans, its mission will be to provide funding for brain cancer research and treatment.

Other Bands and Collaborations