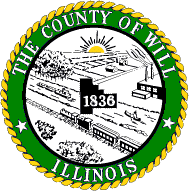 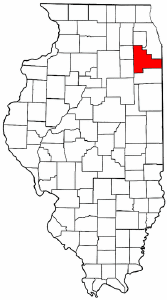 Will County was formed in 1836 out of Cook, Iroquois and Vermilion Counties. It was named after Dr. Conrad Will, a businessman involved in salt production in southern Illinois, and also a politician. (An interesting point about salt production at that time was the law allowed slaves to be leased from other states and used in the of Illinois only for salt production.)

The county received its name from Dr. Conrad Will, a member of the first Constitutional Convention and a member of the Illinois Legislature until his death in 1835. In the year 1836, January 12th, Will County was formed from Cook County and Iroquois County and included besides its present area, the part of Kankakee County, Illinois lying north of the Kankakee River. Will County lost a small area when Kankakee County, Illinois was organized in 1852, but since then its boundaries have been unchanged.

Will County is located in northeastern Illinois, south of Cook County. The county seat is in Joliet, Illinois which is located approximately 40 miles southwest of Chicago on the Des Plaines River.

From the 1854 US :quotation|WILL, a county in the E. N. E. part of Illinois, bordering on Indiana, has an area of 1236 square miles. It is intersected by the Kankakee and Des Plaines rivers, branches of the Illinois. The surface is generally level, and destitute of timber, excepting small groves. The soil is very fertile, and much of it is under cultivation. The soil of the prairies is a deep, sandy loam, adapted to Indian corn and grass. In 1850 the county produced 527,903 bushels of Indian corn; 230,885 of wheat; 334,360 of oats; 32,043 tons of hay, and 319,054 pounds of butter. It contained 14 churches, 3 newspaper offices; 3472 pupils attending public schools, and 200 attending other schools. Quarries of building stone are worked near the county seat. The Des Plaines river furnishes water-power. The county is intersected by the Illinois and Michigan canal, by the Chicago branch of the Central railroad, the Chicago and Mississippi, and by the Chicago and Rock Island railroad. Named in honor of Conrad Will, for many years a member of the Illinois legislature. Capital, Joliet. Population, 16,703.

Will County is divided into these townships:

The county is in Community College District 525 and is served by in Joliet. [http://www.illinoisatlas.com/illinois/education/pdf/il_cc_2002.pdf retrieved 2007-02-13] Joliet Junior College was the first two-year higher education institution in the United States.

The county is a major hub in the United States pipeline grid where pipelines from and the meet and then fan out to serve the Midwest.

Major highways in the county include and . The toll road extension has been completed and now connects with .

The following sites, in Will County, Illinois, are on the Listing: