Armando Christian Pérez (born January 15, 1981), better known by his stage name Pitbull, is an American rapper, singer-songwriter and record producer. His first recorded performance was from the Lil Jon album Kings of Crunk in 2002, after which he released his debut album in 2004 titled M.I.A.M.I. (short for Money Is a Major Issue) under TVT Records. Since then, he has released two other albums under the label, El Mariel in 2006 and The Boatlift in 2007.[1] He then released Rebelution in 2009, which included singles "I Know You Want Me (Calle Ocho)" and "Krazy". The latter peaked at No.30 on the Hot 100 and No.11 on the Hot Rap Tracks charts while "I Know You Want Me" peaked at No.2 on the Hot 100 and peaked within the top ten spots of charts in the UK, Canada, Italy, and the Netherlands. The song reached No.1 in France and the European Hot 100 on the week ending August 29, 2009 according to Billboard magazine. He later signed with Polo Grounds Music through Sony Music and created his own label Mr. 305 Inc. Other singles from Rebelution included "Blanco" featuring Pharrell Williams of The Neptunes and "Hotel Room Service", the latter of which peaked at No.8 on the Hot 100. Rebelution went on to sell over 7.5 million worldwide digital singles and albums combined.[2]

Pérez is also the host of his own Spanish-language program on the cable channel Mun2 titled La Esquina (Spanish for The Corner).[3]

In 2005 Pérez and rapper Sean 'Diddy' Combs co-founded Bad Boy Latino, a subsidiary of Combs' Bad Boy Records label. It primarily focuses on Latin Rap, Latin Soul and Tropical music, and has offices in Miami and New York.[4][5] Along with co-founding it, Pérez currently heads the A&R division of the label.[6][7]

Pérez has become a product endorser, representing alongside Drake, Rihanna, and Trey Songz the “So Kodak” campaign for the Kodak brand[8] and embarking on a partnership with the soda giant Dr Pepper as part of the campaign “Vida 23” for which he recorded the song specifically for it that was also featured on his album Armando.[9]

Pitbull was born to Cuban immigrant parents who made him recite the works of poet José Martí.[10] He encountered problems early in his career as a rapper because he was blue-eyed and Cuban American.[11] He was also influenced by the Miami bass genre of hip hop music[1] and has cited Celia Cruz and Willy Chirino as sources of inspiration for his music.[12] Perez's parents separated when he was young, and he was raised by his mother. He later spent time with a foster family in Roswell, Georgia.[13] At age 16, his mother kicked him out of their house after he became a drug dealer. He then graduated from Miami Coral Park High School and focused his career in rapping.[13]

Pitbull explained the reason behind choosing his stage name, saying about the dog "they bite to lock. The dog is too stupid to lose. And they're outlawed in Dade County. They're basically everything that I am. It's been a constant fight."[13] After meeting Lil Jon in Miami,[13] Pitbull was featured on Lil Jon and the East Side Boyz' album Kings of Crunk in 2002.[1] Pitbull's song "Oye" was featured on the soundtrack to the film 2 Fast 2 Furious the following year.[13] In addition, Pitbull also released several mixtapes, composed of freestyles and remixes of popular rap music. Campbell featured Pitbull in his single "Lollipop".[1]

In 2001 Pitbull was signed to Luther Campbell's Luke Records by Jullian Boothe, then the label's vice-president of A&R.[14] In 2001 Pitbull was introduced to Robert Fernandez of Famous Artist Music & Management, an independent label and management company specialising in developing artists, by the Diaz Brothers, a producer duo signed to the company.[15] Fernandez "saw the eagerness and hunger he had" and, with the Luke Records deal ending, began working to develop Pitbull.[15] Together they focused on creating a more radio-friendly sound. Fernandez later told HitQuarters: "At that time his music had a lot of verses and took a long time to get into the hook, and so we took time in getting the songs catchier and less on the rap side."[15] Pitbull recorded between 50 and 70 songs.

Fernandez introduced Pitbull to Lil Jon with a mind to trying to secure the rapper a small guest intro spot on Lil Jon's upcoming album "Kings of Crunk".[15] According to Fernandez, Jon took a liking to Pitbull and went one better by offering him his own track on the album called "Pitbulls Cuban Ride Out", a feature that would help raise the young rapper's profile.[15]

In 2004, Pitbull released his debut album M.I.A.M.I., with the lead single being "Culo" ("Ass" in English) produced by Lil Jon and the Diaz Brothers. It peaked at No.32 on the Billboard Hot 100 chart and No.11 on the Hot Rap Tracks chart. Other singles included "Dammit Man", "Back Up", "Toma", and "That's Nasty" (both featuring Lil Jon). He joined the Anger Management Tour, the 2000 hip-hop concert tour headlined by Eminem and 50 Cent.[16] Pitbull also appeared on the Ying Yang Twins' single "Shake", which peaked at No.41 on the Hot 100 and No.12 on the rap chart, and Twista's "Hit the Floor" (#94 Hot 100, No.20 Rap). Remix album Money Is Still a Major Issue was released in November 2007; it included new track "Everybody Get Up", a duet with hip-hop/R&B group Pretty Ricky.

TVT Records, Pitbull's label at the time, and Slip-N-Slide Records disputed over the release of Welcome to the 305, an unreleased album by Slip-N-Slide that Pitbull had recorded in 2001.[17] A Miami judge ruled that Slip-N-Slide had a legal right to release the album as it was recorded when Pitbull was a Slip-N-Slide artist, and prior to him signing with TVT Records.[18] A U.S. District Court judge affirmed the decision further.[19] TVT was then ordered in March 2007 to pay Slip-N-Slide $9.1 million for attempting to block the album's release to record stores and digital download entities.[20]

In January 2006, he guest-starred in UPN's South Beach. Also in 2006, he recorded "Nuestro Himno" in collaboration with Wyclef Jean, Carlos Ponce, and Olga Tañón.[21] On Listennn... the Album, the debut album by Terror Squad member and Miami radio personality DJ Khaled, Pitbull performed on three singles: "Holla At Me" and "Born-n-Raised" alongside other Southern based rappers. 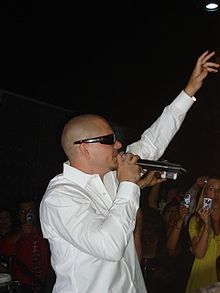 El Mariel, Pitbull's second album, was released in October 2006. The title was in reference to the town from which the Cuban refugees came to Florida in the movie Scarface. He dedicated the album to his father, who died that year in May.[11] Along with the usual party-oriented tracks, Pitbull also included politically-themed tracks in El Mariel.[22] The album was released on October 31, 2006, and included singles "Bojangles", "Ay Chico (Lengua Afuera)", "Fuego", and duet with Puerto Rican singer Ken-Y, "Dime (Remix)". El Mariel topped the Billboard independent albums chart[23] and peaked at No.17 on the Billboard 200 and No.2 on the rap chart.

Pitbull's third album, titled The Boatlift, was released in November 2007, spawned by the single "Secret Admirer" featuring Lloyd on the chorus. Earlier, Pitbull announced that this album would have a more gangsta rap edge than his earlier albums.[24] Subsequent singles included "Go Girl" featuring Trina, and "The Anthem" featuring and produced Lil Jon, that song sampling the hook from the song "El Africano" by Wilfrido Vargas and the beat from the song "Calabria" by Rune RK. "Go Girl" peaked at No.80 on the Billboard Hot 100 and No.36 on the Hot Rap Tracks chart; "The Anthem" No.36 on the Hot 100 and No.11 on the Hot Rap Tracks.

For his fourth studio album Rebelution, Pitbull released "I Know You Want Me (Calle Ocho)" through Ultra Records after his former label TVT Records went out of business. "Krazy" peaked at No.30 on the Hot 100 and No.11 on the Hot Rap Tracks charts. "I Know You Want Me" peaked at No.2 on the Hot 100 and peaked within the top ten spots of charts in the UK, Canada, Italy, and the Netherlands. The song reached No.1 in France and the European Hot 100 on the week ending August 29, 2009 according to Billboard magazine. On Dec. 11, 2009, Billboard announced their Year-End Canadian Update, placing "I Know You Want Me" at No.7 on the Hot 100 chart and No.2 on the CHR/Top 40 chart.[28] He later signed with Polo Grounds Music through Sony Music and created his own label Mr. 305 Inc.[29] Other singles included "Blanco", featuring Pharrell Williams of The Neptunes, and "Hotel Room Service", which samples "Push the Feeling On" and which peaked at No.9 on the Hot 100. On their second collaboration since "Go Girl", Pitbull appeared on the debut single of rapper David Rush (formerly Young Bo$$), "Shooting Star", also with Kevin Rudolf and LMFAO. An amateur video of Pitbull punching a disruptive audience member at a Colorado concert leaked on the Internet in late May 2009. Pitbull explained to MTV News that it was because the fan kept throwing cash around the stage, and after Pitbull pulled him up to the stage, he threw a stash of money right in Pitbull's face.[30] He has been tapped by the Miami Dolphins to work alongside T-Pain & Jimmy Buffett to release a new fight song for the Dolphins.[31] The city of Miami granted Pitbull a "Key to the City" honor on August 19.[32]

In 2010, Pitbull performed the rap section in the Haiti benefit song "Somos El Mundo", a Spanish version of "We Are the World", that included a huge group of Latin artists led by Emilio and Gloria Estefan. He was also a featured guest on "Armada Latina", the fourth single off the album Rise Up by Latin rap legends, Cypress Hill. The song was produced by Jim Jonsin and also features Marc Anthony. Pitbull then collaborated with Alexandra Burke on the single "All Night Long". He was also featured on "DJ Got Us Fallin' in Love" by Usher.

Pitbull released his highly anticipated follow-up English album, Planet Pit, on June 21, 2011. Pitbull collaborated with T-Pain on its first single, "Hey Baby (Drop It To The Floor)". Pitbull announced he’s the spokesperson for Voli Vodka, in which he holds a majority equity stake.[35] Pitbull has also collaborated with Jennifer Lopez on her single "On the Floor". On March 22, 2011, Pitbull released his second single, "Give Me Everything" featuring Ne-Yo, Afrojack and Nayer, and three months later, the song became Pitbull's first single to top the Billboard Hot 100.[36] On May 2, 2011, Pitbull and Mýa appeared on WWE Monday Night RAW to celebrate Dwayne "The Rock" Johnson's birthday.[37][38] Pitbull will be touring Australia as part of Iglesias’ “Euphoria” tour in July 2011.[39] Pitbull appeared as musical guest on Conan on August 1, 2011.[40] On August 22, 2011, Lindsay Lohan sued Pitbull, Ne-Yo and Afrojack in response to "Give Me Everything"'s lyrics referencing her name.[41]

On October 7, RCA Music Group announced it was disbanding J Records along with Arista Records and Jive Records. With the shutdown, Pitbull (and all other artists previously signed to these three labels) will release his future material on the RCA Records brand. [42] [43]