Chatham Grammar School for Boys (commonly abbreviated CGSB) is a grammar school in Chatham, Kent, England. As with most schools in the town, it is a selective school; however, the sixth form is comprehensive.

The school’s history is believed to date from 1817, but its formal history began in 1913 with the establishment of Chatham Junior Technical School to train young men aged 13 – 16 for careers as artificers in the Royal Navy and in the Royal Dockyard School (later College) as engineers. The School evolved to become a centre of academic excellence as Chatham Grammar School for Boys, offering GCSE and A Levels as well as an Advanced Level Vocational Courses. The school moved to its current site in the 1920s, with its premises based around Holcombe Manor. After 1945 it became a specialist technical school and in 1982 it became a grammar school.[1]

From September 2005, students take their SATs a year earlier than usual - in year 8 - meaning GCSEs are also started a year early, in year 9. A variety of GCSE courses are available in years 9 and 10. The school achieved Language College status in 2001, and students starting between 2000 and 2003 had to study two languages from Year 7 to 11. As of 2006[update] this is no longer the case. In support of the accelerated curriculum, the school has provided opportunities for students to experience a range of innovative courses as part of the third year of the sixth form.

In a past Ofsted report, the school was rated as very good in its teaching of pupils between 11 and 16. In April 2009, the school received its second specialism in Science and was also recognised as a specialist in the field in Gifted and Talented education.

The school has the largest sixth form in Medway due to its open nature. A minimum of 5 C grades at GCSE or equivalent are required. A large proportion of students at Key Stage 4 (year 11) progress to the sixth form with many students joining from neighbouring schools. Like many traditional boys' schools in the country, the sixth form is open to girls. In 2006, the Sixth Form forms were changed, partially due to increasing entry numbers, to have three forms for each house, a mix of Year 12 and 13.

There were very positive comments made about particular subjects. Media Studies, Business Studies and Personal Finance have been shown to rival the best in the region, and are recommended in the Good School Guide. It has recently been selected for a lead role in its new Diploma programme both in ICT and Creative and Media Studies.

There are six school houses, all named after ships constructed at the nearby Chatham Dockyard. They are, along with their house colour, Achilles (Red), Blake (Green), Challenger (Blue), Dryad (Yellow), Expedition (Purple) and Formidable (Orange). The houses compete against each other at events like the school's annual summer Sports Day, the autumn Cross Country, sports events such as rugby and hockey, and also at tasks like collecting the most merit marks, in order to obtain the House Shield trophy. Each year has six forms lettered A - F to reflect the houses, except the year that started in 2000, when there was a larger intake than could be facilitated into lettered Forms. While all students in this year were still assigned separate houses - thus mixing all five houses between each form - and numbering forms 1 through 6 until Formidable was created and brought into effect in 2001.

The sixth form members are also still grouped in houses, with students progressing from Year 11 into Year 12 keeping their houses, and new Year 12 students are assigned a house. However, they are also arranged into different forms, which are lettered according to the form tutors' surname (for example Mr Jones's form group would be 12J) As of September 2006, the Sixth Form structure was changed in an attempt to bridge the gap between years 12 and 13 by mixing the two years into single forms. These again were composed using the house system with each house having three forms sorted alphabetically, and were named accordingly, starting 6A1, 6A2, 6A3, 6B1, 6B2, 6B3 and so on up to 6F3.

The school participates in the national Junior Maths Challenge, run by the University of Leeds. Uniform for students in years 7–11 includes a school tie which varies according to status (lower school student, sixth form student and prefect), and a blazer with house badge - a coloured "C", which surrounds the Invicta White Horse of Kent symbol. The Uniform for year 11 students is different to that of any other year in the school in that a blue shirt is worn, and a year 11 specific tie, the same blazer is worn as the years 7-10.

The school has developed links in the local community through various initiatives. In 2001, the director of the Language College faculty of the school launched a programme with primary schools in Medway where students of the school took a travelling theatre, Linguafun, to entertain and educate Key Stage 2 pupils through songs, puppets and audience participation[2]. 2001 also saw adult language lessons begin once a week in French, German and Spanish. As of 2007[update], these still continue[3].

Students have the opportunity to take part in a range of off-site trips. The most popular are those abroad, to destinations including France, Germany Spain, America, South Africa and Japan. In recognition of the outstanding opportunities for students to experience different international cultures, the school was awarded Full International School Status in Septemner 2009 by the DCSF / British Council. Other trips include the annual year 7 Kent residential trip and the GCSE Geography trip to the Lake District. 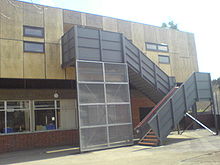 The new art block, and below, the DT block

The school comprises several buildings, most notably the former Holcombe Manor. This was extended, replacing the conservatories, then expanded further with the construction of the atrium block, which houses the humanities faculty, opened in February 1997.

During the academic year 2001/2002 the school was extended out and up from the old Manor to facilitate English, Drama, Psychology and Music, as old mobile classrooms were removed from the site for refurbishment and a lease renewal.

In 2002 construction on a new Maths block ("M") began. The work was completed in August to be unveiled in the new academic year 2002/2003. This building houses one large first floor room used as an exam room and Sixth Form study area.

In December 2006 new accommodation for art students was finally ready and opened by local artist Billy Childish. Consisting of a Skylab-style structure, it was built on stilts above the existing design technology ("D") block, and includes a disabled lift, the first in the school. 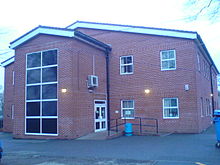 The pupils at CGSB demonstrate distinctive initiatives in a variety of ways. Recently they were both Medway and Kent champions in the national Young Enterprise competition, beating many other schools[4]. Along with these two achievements, there has recently been an award handed to teacher Ben Crozier, for Medway Teacher of the Year as well as Aimee Banks winning Kent and Medway Teacher of the Year in previous years.