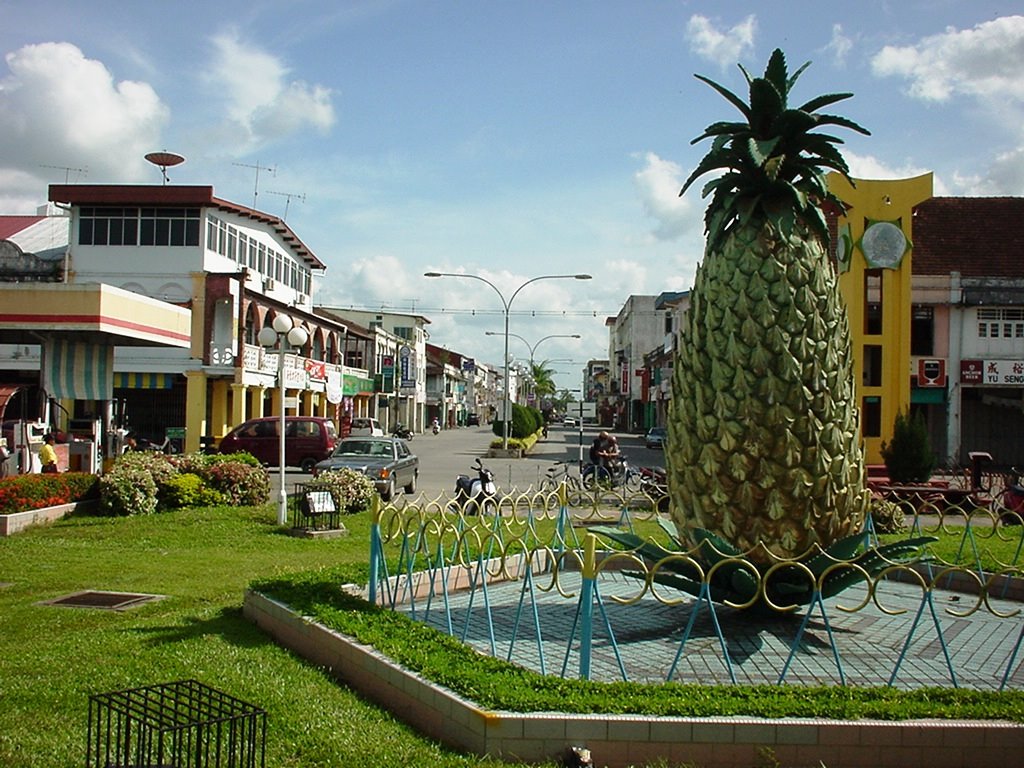 Sarikei is a town, and the capital of the "Sarikei District" (985 square kilometers) in , , east . It is located on the , near where the river empties into the . The district population (year 2000 census) was 61,100. The population is culturally mixed, with mostly Iban, , Malay and Chinese predominating.

The economy of the town is primarily agricultural, and Sarikei is famed for its and its pepper. The center of town has many old Chinese shophouses from the 1930s. It is also a major transportation hub for traffic on both the and the Rajang river. Anybody traveling by road or express boat from to must pass through Sarikei.

The most distinctive feature of the bustling waterfront is a 3.6 m high pineapple statue.

The town itself consists of a main road, Repok Road which is bisected by another road leading to the new development in Kampung Seberang.

The early history of Sarikei can be traced as far back as the early 19th century. There are many historical events to show its existence. For example, Rajah first visited Sarikei on . There were also resistance from the local people towards the Brooke’s administration, including the burning of Sarikei on 4.1.1856 and the Julau Expedition on , which was led by Sir to counter the native resistance in Julau.

The establishment of Sarikei as a new Division was mainly based on security consideration. Datu Wilson Baya Dandot, The Deputy State Secretary (Planning and Development) in his article entitled: Sarawak’s Unique Administrative Identity: Establishment of Divisional, District and Sub-District Machinery For Enhancing Development Administration said that the establishment of Sarikei as the Sixth Division then was due to the security threats posed by the communist insurgency which was at its height at that time. It was felt that with the establishment of a new Sarikei Division the government would be able to concentrate and focus more in its efforts to contain and counter the security problem in the area.

Also known as the "food basket" for the Land of the Hornbills, Sarikei started as a small village comprising the "Segalang" community and a few rows of Chinese shophouses. From a dead town, the once isolated and remote Sarikei has progressed and the people now enjoy infrastructural facilities and economic opportunities.

Medical needs are served by several hospitals and clinics. The main hospital is Sarikei Hospital, officially opened in 2006, costing RM250.4M.

There are several schools with decades of established history.

Sarikei Public Library, situated at Jalan Kapur, has a floor area of approximately 2,000 square meters at a cost of around RM3.5 million and was opened to the public on 1 August 2003. It is one of the landmarks of the town given it's unique architecture which sets it apart from the other government buildings in the town.

The major housing areas in the town are the Hua Tai, Sunny Spring, Kiong Soon Road, Jongkong Road, Nyelong Park and the Meranti road housing estates. The majority of the houses in the estates are terrace houses with some semi-detached houses. There are also some bungalows and detached units.

*Water Transport: Sarikei Wharf Terminal. Terminal 1 is next to the clock tower and the pineapple statue. Terminal 2 serves the bigger boats to Kuching.
*Land Transport: Sarikei Regional bus terminal located 1 km from town centre serves as the main hub for express buses to various destinations in Sarawak including Kuching, Sri Aman, Sibu, Bintangor, Bintulu and Miri.
*Taxis: Taxis are available near the wharf terminals, the bus terminal as well as in the central taxi station at the first intersection of Jalan Repok.

Sebangkoi Country Resort is a popular place to visit for the local populace. What was once a simple waterfall has now emerged as a multimillion dollar development with landscaped gardens and accommodation.

Sarikei Wharf Esplanade is ideal for evening strolls and sunset watching. The sun sets in the west and that's the direction of the Rejang River's flow towards the river mouth at the South China Sea where it deposits its silt.

Sarikei Lake Park,situated opposite the fire station, is one of the more popular spots for families and young couples to have a walk and generally hang out. It's built around an artificial lake and features gazebos and a jogging path.

Sarikei Merdeka Park is one of the latest additions to the local government's effort to turn Sarikei into a more aesthetic town. Built in 2004, it consists of a central courtyard framed by two gazebos and Zen balls. The park was built on what used to be the Pasar Tamu of the town.

Bukit Huang Pineapples & Vegetables Plantation is one of the largest farms at the Rejang Delta region. 30% of Sarikei's Local Vegetables supply and 50% of famous Sarawak Pinesapples production place.

The main religions in the town are Christianity, Buddhism and Islam.

The town also have a fairly large population of Christians. The majority of the Christians belong to the Methodist denomination which have about four churches in the town area and surrounding residential areas. The Roman Catholic parish of St Anthony's in Sarikei has its church along Repok Road. The mission also runs two schools, St. Anthony's Secondary School and St. Anne's Primary School as well as a kindergarten, St. Clement's. Other Christian churches include the Anglican Church centre in the Nyelong Park Housing Estate as well the SIB (Borneo Evagelical Church).

The primary place of worship for the Muslims is the town mosque adjacent to the Hua Tai residential area.

Taman Selera at Kampung Seberang is one of the hottest spot at night serving different types of halal food ranging from Satay to local version Pizza.

* - Malay warrior and the Resident of Sarikei during era