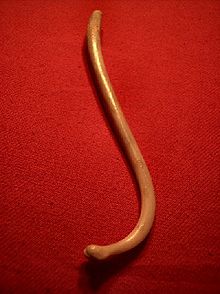 The baculum (also penis bone, penile bone or os penis) is a bone found in the penis of most mammals. It is absent in humans, but present in other primates, such as the gorilla and chimpanzee. The bone aids in sexual intercourse.

The baculum is used for copulation and varies in size and shape by species. Its characteristics are sometimes used to differentiate between similar species. A bone in the penis allows a male to mate for a long time with a female, which can be a distinct advantage in some mating strategies.[1]

The word baculum originally meant "stick" or "staff" in Latin. The homologue to the baculum in female mammals is known as the baubellum or os clitoridis or os clitoris.[2]

Mammals having a penile bone (in males) and a clitoral bone (in females) include various eutherians:

It is absent in humans, equids, elephants, monotremes, marsupials, lagomorphs, hyenas, and cetaceans (whales, dolphins, and porpoises), among others.

Such a wide distribution among placental mammals suggests that the bone evolved early in the history of these mammals, and was subsequently lost in certain groups.

Among the primates the marmoset, weighing around 500g, has a baculum measuring around 2mm, while the tiny 63g Galago has one around 13mm long. The Great Apes, despite their size, tend to have very small penis bones, and humans are the only ones to have lost them altogether.[1]

Unlike other primates, humans lack an os penis or os clitoris; however, this bone is much reduced among the great apes: in many ape species it is a relatively insignificant 10–20 mm structure. There are reported cases of human penis ossification following trauma,[4] and one reported case of a congenital os penis surgically removed from a 5 year old boy, who also had other developmental abnormalities, including a cleft scrotum.[5] Clellan S. Ford and Frank A. Beach in Patterns of Sexual Behavior (1953), p. 30 say "Both gorillas and chimpanzees possess a penile bone. In the latter species the os penis is located in the lower part of the organ and measures approximately three-quarters of an inch in length." [6] In humans, the rigidity of the erection is provided entirely through blood pressure in the corpus cavernosum.

The evolutionary biologist Richard Dawkins speculated in 2006 that the loss of the bone in humans, when it is present in our nearest related species the chimpanzee, is a result of sexual selection by females looking for signs of good health in prospective mates. The reliance of the human penis solely on hydraulic means to achieve a rigid state makes it particularly vulnerable to blood pressure variation. Poor erectile function betrays not only physical states such as diabetes and neurological disorders but mental states such as stress and depression.[7]

It has also been speculated that the loss of the bone in humans, when it is present in our nearest related species the chimpanzee, is because humans evolved a mating system in which the male tended to accompany a particular female all the time to attempt to ensure paternity of her children which allows for frequent matings of short duration. Observation suggests that primates with a baculum only infrequently encounter females, but engage in longer periods of copulation which the baculum makes possible, thereby maximizing their chances of fathering the female's offspring. For humans, it is almost impossible to tell when the female is fertile so frequent matings would be necessary to ensure paternity.[1]

The existence of the baculum is unlikely to escape the notice of pastoralist and hunter-gatherer cultures (see also below), but there is no specific term for it—nor for the penis itself—in Biblical Hebrew. This leads to one interpretation on the origin of Adam's rib, or his 'bony part' as a direct translation from Hebrew, in the creation of Eve as told in the stories of Genesis.[8]

Oosik is a term used in Native Alaska cultures to describe the baculum of walruses, seals, sea lions, and polar bears. Sometimes as long as 60 cm (2 ft), fossilized bacula are often polished and used as a handle for knives and other tools. The oosik is a polished and sometimes carved baculum of these large northern carnivores. The raccoon baculum is also sometimes worn as a charm for luck or fertility.[citation needed]

Oosiks are also frequently sold as souvenirs to tourists by Alaska Natives. In 2007 a 4.5-foot (1.4 m) long fossilized penis bone from an extinct species of walrus, believed by the seller to be the largest in existence, was sold for $8,000.[9]