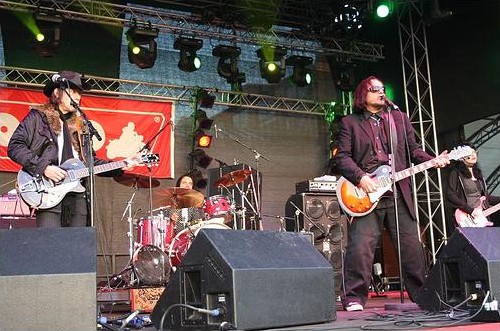 "Tito & Tarantula" are a rock band formed in 1992, a few years after Tito Larriva's previous band, the , disbanded. The band is best known for its songs, "After Dark", "Back to the House That Love Built", "Strange Face of Love", and "Angry Cockroaches", as well as for its role in 's film "" as the band performing at the "Titty Twister".

Larriva was born in , but spent his early years living outside ; his family later relocated to , where he studied violin and flute as a member of his school orchestra. After high school he flirted with attending before landing in in the mid-1970s. He began his music career by playing in some of the first Latino punk bands such as , Flesh-Eaters, and, most notably, . Larriva released several albums with the Plugz before the group disbanded in 1984. Following disbandment, Larriva teamed up with former Plugz bandmates and to form the . With the Cruzados, Larriva's music began to move in a different direction, straying from his typical punk rock to a bluesier 1980s rock sound. The band was critically acclaimed and opened for big acts like and . [ [http://www.imdb.com/name/nm0488644/bio Tito Larriva - Biography ] ] They released a self-titled album in 1985, followed by "After Dark" in 1987, but disbanded in 1988.

Early years: "Desperado" and "From Dusk Till Dawn"

From there, Larriva continued writing film music, and also turned to acting. Starting in 1992, he and guitarist celebrated with various friends at live weekly jam sessions in the cafes and clubs of Los Angeles, at big, spontaneous parties. By 1995, they were officially Tito & Tarantula, and had a stable line-up of Larriva (, ), Atanasoff (), (bass), (, , , ), and (drums, percussion). It was with this line-up that they recorded the songs "Back to the House That Love Built", "Strange Face of Love", and "White Train", which made their debut in ' film "Desperado", which featured Larriva in a fairly minor but important role. The three songs appear on the film's soundtrack. The next year, the band appeared in Rodriguez' "" as house band of the "Titty Twister" (though this band only consisted of Larriva, Atanasoff, and future drummer ). They also recorded three songs for the film: "After Dark", "Angry Cockroaches", and "Opening Boxes" (the latter of which did not appear on the soundtrack album). By this point, the band were steadily becoming more well known.

"At some point, more and more people came to see us," says Larriva, "After we did "Desperado" and "From Dusk Till Dawn", it was clear that something big was happening with us." So in 1997, Tito & Tarantula made its long-awaited album debut, "Tarantism". The album featured four of their six previously released songs ("After Dark", "Strange Face of Love", "Angry Cockroaches", and "Back to the House that Love Built"), and six new songs. It also featured guest-appearances by Larriva's former and bandmates and . It was very well received by both fans and critics alike, and many have longed for an album comparable to it ever since. The band spent much of 1997 and 1998 touring behind the record. In late 1997, following the release of "Tarantism", the band recruited percussionist , probably best known for his work with Oingo Boingo.

In late 1998, Vincent and Bertles, married in 1994, were expecting their second child, and chose to leave the band. Following their departure, Vatos took over on drums, and was recruited to replace Bertles. This new line-up set to work on a new album, writing and recording new songs, but saw the departure of Haden before the album was released. The finished album, "", was released in 1999. It was well-received, but was considered a disappointment in comparison to "Tarantism". After the release of "Hungry Sally", the band recruited to replace Haden as violinist, mandolinist, flutist, and guitarist.

Following the release of "Hungry Sally", Condos left the band for "private reasons". The four remaining members began to work on another album, "", but saw the departure of Figueroa from the band before the album's release in 2000. "Little Bitch" did not sell well, and featured a fair amount of musical experimentation that did not please fans. It did, however, feature co-songwriting credits from Larriva's former bandmate .During this time, the movie, "" was released, the third installment of the "From Dusk Till Dawn" trilogy, the first of which featured musical contributions and guest roles by the band. The third movie featured the band's song "Smiling Karen" in the closing credits.

After the release of the album, the band began to hire replacements for their departed bandmates. Firstly, they hired two musicians who had assisted them on "Little Bitch": (who had played bass and additional guitar on the album, but was hired as a pianist) and (who joined as a second lead guitarist). Additionally, they hired bassist as a replacement for Condos. This line-up spent 2001 and some of 2002 touring, then went back to the studio to record "Andalucia", which was released in 2002. The album did not sell as well as either of the first two either, but got better reception than "Little Bitch". The band spent the next few years touring the album. They also filmed a music video for the song "California Girl". However, upon seeing how bad the footage of the video was, Perry threw up, Larriva threatened to quit, and Atanasoff was not seen around for days. So, to compensate, Larriva made his own video for the song using the eight dollars he had in his pocket.

Since the release of "Andalucia", Tito & Tarantula have made numerous personnel changes, starting with the departure of drummer Johnny "Vatos" Hernandez. was hired in his place, but left the band later on as well. One of the most notable changes, however, was the loss of the band's valuable founding member Peter Atanasoff. Little is known about his departure, but on the band's myspace blog, it says, "...So if ever you find yourself in Switzerland you want to make your way to the Moonwalker and say hello to Peter..." Io Perry quit the band to pursue a solo career, but stayed in business with Larriva by having him produce her first solo album. Along with Atanasoff, Perry, and Hernandez, the band lost multi-instrumentalist Marcus Praed, eventually leaving Larriva and Steven Hufsteter as the only remaining members who had played on the last album. (who had played bass on "Little Bitch") took over on bass and took over on drums. The only members from the previous line-up were Larriva and Hufsteter. With this new "fab four" incarnation, they toured Europe thoroughly. At some point in mid-2007, Davalos left the band, and was replaced by . With her, the band has continued to tour its usual areas in western Europe.

In December 2007, the band's song "Angry Cockroaches (Cucarachas Enojadas)" has been featured in previews for the movie "".

In late 2006, the band promised an album out in early 2007 on their myspace blog. In early 2008, the band finally announced the approaching arrival of their next album, titled "". The album was released on , .

Though a successful band in their own right, Tito & Tarantula seem to be very poorly known. They are fairly well known across Europe (as that is the continent that they spend most of their time touring) and have up to tens of thousands of people show up at some of their concerts, but overall are not extremely well known. Especially the fans in Germany (called "Deutschlandia" by the band) proved to be very loyal. Little information can be found about them on the internet, and their albums are hard to find outside of certain places in Europe. Regardless of this, the band see themselves as having a decent amount of fame wherever they go.

Many critics and fans note Tito & Tarantula for their unusual musical style. Larriva's soft and clear but easily intensified voice appears throughout their career, as does Atanasoff's unique guitar-playing, which is said to "target a certain sound over skill". In addition to this, there are other uncommon elements in each of their albums. On "Tarantism", Atanasoff sports a metal-resembling guitar sound on tracks like "Strange Face of Love", "Angry Cockroaches", and "Smiling Karen", which when blended with Nick Vincent's very blues-driven drumming and Lyn Bertles's provision of violin, mandolin and recorder, results in a sound like nothing else. It was also on this album that the majority of the songs started out mysterious sounding, but slowly built up, and by the end sounded extremely intense.

On "", Tarantula continued to play songs that started out light and built up as they progressed, particularly "Hungry Sally" and "Bleeding Roses". This time, however, Atanasoff was trying out with a lighter lead guitar sound, and Johnny "Vatos" Hernandez was playing drums, resulting in a different and more prominent drum sound. Once again, though, instruments uncommon to the rock genre such as violin, mandolin, and recorder were featured, once more blending all these elements into something entirely new.

"" is considered to be Tarantula's most experimental album. It was different from the past two albums in many ways: it featured a large amount of synthesizers, numerous female backing vocalists, and several entirely-acoustic tracks. Larriva also experimented with his vocals on this album, as can be heard in the falsetto singing in "Forever Forgotten and Unforgiven" and the screaming in "Crack in the World". Also, surprisingly, the song "Super Vita Jane" featured a rap at the end, unlike anything they had ever done before. Songs like "Everybody Needs" were very reminiscent of the '80s, even though the album was released more than a decade later.

On "Andalucia", the band revisited the sort of music they had played on "Hungry Sally & Other Killer Lullabies". A few of the tracks featured keyboards, which weren't too common of an instrument in their music before, but had to be incorporated so that their keyboardist, Marcus Praed, would have a contribution to the songs. Like on "Little Bitch", the album featured female backing vocals, but this time they were all contributed by Io Perry. Overall, the album was general rock, but also featured several acoustic power ballads, such as "You're the One I Love", "California Girl", "Bullets from a Gun", "Make Me", and "Mexican Sky".

*Other films Tito & Tarantula have contributed music to include "Somebody to Love", "", and "".
*The music videos for "After Dark" and "Back to the House that Love Built" feature clips from "Desperado" and "".
*In 1997, the song "White Train" was purchased by and used as the theme song for WCW President/television character, .
*Larriva and Hufsteter have recorded three versions of the song "La Flor De Mal" together: one for with the , one with Tito & Tarantula, and one for the "" soundtrack.
*Larriva has a songwriting credit for every Tito & Tarantula song.
*During the last 50 seconds of the song "Effortless", Larriva, Atanasoff, and Perry can be heard laughing as they watch the failed "California Girl" music video.
*Tito & Tarantula's music is most popular in Germany.
*Tito & Tarantula have toured with as a third guitarist.
*Tarantula's most popular song, "After Dark", is also their oldest song: according to Larriva, it was written by him and Hufsteter in 1981.