In baseball, interference is an infraction where a person illegally changes the course of play from what is expected. Interference might be committed by players on the offense, players not currently in the game, catchers, umpires, or spectators; each type of interference is covered differently by the rules.[1] 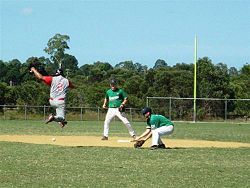 A runner jumping over a ball to avoid an offensive interference

Under Little League (LL), high school (NFHS) and college (NCAA) rules, if interference is committed by a runner with the effect of preventing a likely double play, regardless of his intent, the batter-runner will be called out in addition to the runner who committed the interference.

Also under LL and NFHS rules only, all runners are required to attempt to avoid collisions; if a runner fails to do so, he is guilty of malicious contact, which is one kind of offensive interference. Malicious contact carries the additional penalty of ejection from the game. In contrast, in professional and higher amateur baseball, violent collisions can occur without any interference (or obstruction), especially when a fielder is receiving a thrown ball near a base where a runner is trying to reach. Any collision that occurs in this situation is not interference, because the fielder's action is in regard to a thrown ball. As long as such a runner's actions are related to his attempt to reach the base, he cannot be called for interference. The most common case of this is when a runner is attempting to score and the catcher has control of the ball; if the catcher is in the path between third base and home plate, the baserunner may strike the catcher with his body in an attempt to dislodge the ball from the catcher's hand and then reach home plate. This is usually attempted only when the play is close; when the catcher is set up and ready, the runner has little chance of knocking the ball away. Any such attempt presents a significant chance of injury to the baserunner, which has prompted the malicious contact rule to be used more often. In addition to the general subjective definition of offensive interference, it is also interference by specific rule when[2]:

There are some exceptions to the penalty for offensive interference.

At some levels of play, verbal as well as physical hindrance can be called for interference. For example, if a runner or other member of the offense calls out "foul" on a fair ball or "mine" on a fly ball, he may cause the defense to react differently than they otherwise would have, resulting in an interference call. This is not called as interference in professional or higher amateur baseball.

On October 19, 2004 in game six of the 2004 American League Championship Series, Alex Rodriguez of the New York Yankees intentionally swatted the arm of Boston Red Sox pitcher Bronson Arroyo, who was attempting to tag Rodríguez out. The ball came loose, initially enabling Rodríguez to advance and the previous runner Derek Jeter to score, but instead Rodríguez was ruled out on the interference and Jeter returned to first, under the general definition of the rule above.

A famous alleged offensive interference occurred in the third game of the 1975 World Series. With a runner on first, Cincinnati Reds player Ed Armbrister laid down a sacrifice bunt. Red Sox catcher Carlton Fisk attempted to field the ball and throw to second base and get the lead runner out. However, Armbrister did not immediately run to first base but instead stood essentially still in the vicinity of home plate, forcing Fisk to jump into him in order to make the throw. As a result, Fisk's throw went into center field, and the Reds ended up with runners on first and third and none out. The Red Sox protested, saying that Armbrister interfered, but home plate umpire Larry Barnett refused to change the call. The rules at the time did not mention a batter-runner/catcher collision, but the official interpretation issued to the umpires did; there is no violation on such unintentional contact. [1] The Red Sox lost the game, and ultimately lost the series in seven games, arguably in part due to the Armbrister play.

It is umpire's interference when the umpire hinders a catcher's attempt to throw anywhere. In this case, if the catcher's direct throw retires a runner the play stands, if not, the ball is dead and all runners must return to their time of throw bases.

It is also umpire's interference when an umpire is struck by a fair batted ball before it touches or passes near an infielder other than the pitcher. This can occur either because an umpire is inside the diamond or because the ball crosses 1st or 3rd base in fair territory then hooks or slices foul into the umpire positioned just outside the line behind the bag. In this case, the ball is dead, the batter is awarded first base, and all other runners advance only if forced. A common example is when a batter hits a fair ball down the first base line so hard that the first base umpire can't avoid it. Even though the hit would have surely been a bases clearing double or triple without the interference, it is only a single and runners advance no more than one base. This happened in the 1989 All-Star Game when the Pittsburgh Pirates' Bobby Bonilla led off the 9th with a scorching grounder that would have been an easy double, but it hit First Base Umpire Bob Engel in the legs as he tried to jump out of the way. Instead of being in scoring position down 5-3, Bonilla was forced out at 2nd the next play and the game ended on a double play.

Catcher's interference is called when the catcher physically hinders the batter's opportunity to legally swing at a pitched ball. This occurs most often when a catcher squats too close to home plate, so that the batter's bat touches the catcher's glove as the batter swings. This is most likely to happen on attempted steals where the catcher is anxious to catch the ball as soon as possible and may move his entire body or glove forward a bit.

In this case, play continues, and after continuous playing action ceases, the umpire will call time. The penalty here is that the batter is awarded first base, any runner attempting to steal is awarded that base, and all other runners advance only if forced. Additionally, the catcher is charged with an error (although the batter is not charged with an at-bat). However, if the actual playing result is more advantageous than the penalty, the offense may elect to ignore the infraction (e.g., if the batter-runner reaches first safely and all other runners advance at least one base, catcher's interference is ignored by rule).

Under high school (NFHS) rules only, catcher's interference is instead called catcher's obstruction.

When a spectator or other person not associated with one of the teams (including such staff as bat boys or ball girls) alters play in progress, it is spectator interference, colloquially called fan interference. It is worth noting that the latter is also (incorrectly) used to refer to fan obstruction - for instance a spectator running onto the field and tackling a baserunner.[3] The ball becomes dead, and the umpire will award any bases or charge any outs that, in his judgment, would have occurred without the interference.[4]

Such interference often occurs when a spectator in the first row of seats reaches onto the field to attempt to grab a fair or foul fly ball. If the umpire judges that the fielder could have caught the ball over the field (i.e., the ball would have not crossed over the plane of the wall), he will rule the batter out on spectator interference. Also, the spectator who commits interference is usually ejected from the stadium. Note that spectators are allowed to catch a ball that is in play when the ball has broken the plane of the spectators' side of the wall, even if in doing so they interfere with a player who is also trying to catch the ball. In the 2003 NLCS, Steve Bartman famously hindered Moisés Alou from catching a foul ball, but because the ball had already broken the plane of the wall, it would have landed in the stands and Alou would have had to reach over the wall to get it, no interference was called. The area where both fielders and spectators are legally allowed to catch the ball is colloquially called no man's land.

Umpires typically grab their wrist above their head to signal that spectator interference has occurred.

Several situations arise in baseball that are considered, by logical extension of the rules, not to be severe enough to warrant an interference call, but nevertheless require enforcement to maintain fair play. These are known to umpires as weak interference,[7] though this term itself does not appear in the rules. These well-defined incidents are not severe enough to be considered offensive interference. When weak interference occurs, the ball is usually called dead, but no further penalty is assessed against a baserunner or batter.

Weak interference is called when:

On March 24, 2001 during the 7th inning of a spring training game against the San Francisco Giants, Randy Johnson of the Arizona Diamondbacks threw a fastball that struck and killed a dove that was flying between him and the batter. The bird flew over catcher Rod Barajas's head and landed amid a "sea of feathers". The ball was called dead, as was the dove, and the incident was ruled "no pitch".

When a fielder hinders a baserunner, the situation is called obstruction, not interference. Baseball commentators will often mistakenly refer to obstruction as interference.

If a base runner is hit by a fair-batted ball while standing on a base, the runner is out, unless the ball has already passed an infielder OR it’s a declared infield fly. The base is not a sanctuary.

Being in contact with a base may protect a baserunner from being called out for interference in the case of a fielder attempting to field a batted ball.

"If a runner has contact with a legally occupied base when he hinders a fielder attempting to make a play on a batted ball, the runner shall not be called out unless, in the umpire's judgment, such hindrance, whether it occurs in fair or foul territory, is intentional. If the umpire declares the hindrance intentional, the following penalty shall apply: With less than two outs, the umpire shall declare both the runner and batter out. With two out, the umpire shall declare the batter out."

If, however, the runner has contact with a legally occupied base when he/she hinders the fielder, he/she shall not be called out unless, in the umpire’s judgment, such hindrance, whether it occurs on fair or foul territory is intentional. If the umpire declares the hindrance intentional, the following penalty shall apply: With less than two out, the umpire shall declare both the runner and batter out. With two out, the umpire shall declare the batter out.

For the most part, intent to interfere is not necessary for interference to be called; however, a runner cannot be called for interference with a throw or a fielder making a throw unless such a hindrance was indeed intentional.