Clube Desportivo Nacional, commonly known as Nacional and sometimes Nacional da Madeira (Portuguese pronunciation: [nɐsiuˈnaɫ dɐ mɐˈdɐjɾɐ]), is a Portuguese football club based in Funchal, in the island of Madeira. Founded in 1910, it currently plays in the Portuguese first division. 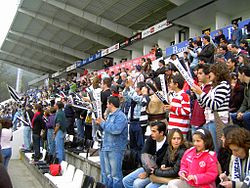 Nacional reached the first division for the first time ever in the mid-90s, returning again in 2002–03. The following season was arguably the best ever season, as the side finished fourth in the league, just squeaking past Sporting Clube de Braga. In that season, three of its key players were Paulo Assunção, a defensive midfielder, and goal-machine Adriano, who netted 19 times. Both would later go to F.C. Porto, while the third key player, winger Miguelito, joined Sport Lisboa e Benfica in 2006.

Nacional also had a quarter-final run in the domestic cup, and would lose in the first round of the subsequent 2004–05 UEFA Cup, being defeated twice by Sevilla FC. In 2006–07's edition, more of the same occurred with two early losses to FC Rapid Bucureşti.

In the 2008–09 season, Nacional again edged Braga for the final fourth spot, mainly courtesy of Nenê, who scored 20 goals and won the Golden Boot honor. The side also reached the last-four in the Portuguese Cup, losing on aggregate 5–4 to Paços de Ferreira, with the decider coming at the Estádio da Madeira in the 90th minute.

2009–10 started without Nenê, who was sold to Cagliari Calcio for a club-record fee of €4.5 million. In August 2009, however, the club managed to defeat former UEFA Super Cup winners FC Zenit St. Petersburg in the UEFA Europa League last round prior to the group stages; after a 4–3 home win, youngster Rúben Micael scored another last-minute goal, as the club was trailing 1–0 in Russia. In the next round, Nacional was drawn alongside Athletic Bilbao, FK Austria Wien, and SV Werder Bremen; the Austrians were beaten 5–1 in Madeira, but the Portuguese did not progress to the knockout stages. In August 2011, Nacional lost 3-0 on aggregate in the final round of Europa league qualifying to Birmingham City, a side in the second division of English football.

As of 6 July 2011. Note: Flags indicate national team as has been defined under FIFA eligibility rules. Players may hold more than one non-FIFA nationality.

The new stand being built

The Estádio da Madeira, better known as the Choupana, houses Nacional. The current stadium is located around nearby training pitches. The club also built an academy campus in name of its most famous player, Real Madrid's Cristiano Ronaldo. The stadium was renovated in 2007 for a new stand and also increasing the capacity to over 5,000 spectators. The total price of the renovations was €20 million.

In these new facilities, no stands were put behind the goals, with a tall fence used in its place. In mid-2007, the stadium name was changed to Estádio da Madeira, because of the excellent sports facilities.

Nacional has a big rivalry with Madeira-neighbours Club Sport Marítimo. Historically, Marítimo dominated Nacional in the early years, being the first to reach European competition. Nacional, however, have crept up in the UEFA standings, finishing fourth twice and fifth in the 2000s.

The Madeira Derby is often associated with the clubs' followers differing culture and way of life. The fans of Nacional, being of a higher socio-economic status than those of Marítimo, were mainly lobbyists for the commercial expansion of Madeira, but the working class Marítimo followers were keen to preserve Madeira. This only exacerbated the ill-feeling between the clubs.

The rivalry heightened when youngster Cristiano Ronaldo declined an offer from Marítimo in favour of Nacional, where his godfather was a member of the board. Politics plays a part in both the Madeira and the Azores derbies, because of Madeira's controversial regional governor, Alberto João Jardim, being a self-confessed Marítimo supporter. Jardim does not have a good relationship with Carlos César, the regional governor of the Azores, and an avid Clube Desportivo Santa Clara fan.

NACIONAL
Clube da nossa Simpatia (Club of our hearts)
Nosso ideal (Our motto)
É lutar com galhardia (Is to fight with valliance)
Quando no campo entramos (When we take the pitch)
Com os nossos jogadores (With our team)
Vê-se vibrar nossa gente (Our people's vibes can be felt)
Aclamando nossas cores (Speaking our colours)
Sentimos dentro de nós (We feel inside us)
Ter qualquer coisa de novo (Something new)
Porque somos sem vaidade (Because we are, without vanity)
A alma do nosso povo (Our people's souls)