The Northern Circars was a former division of British India's Madras Presidency, which consisted of a narrow slip of territory lying along the western side of the Bay of Bengal from 15° 40' to 20° 17' north latitude, in the present-day Indian states of Andhra Pradesh and Orissa. The territory derived its name from Circar or Sarkar, an Indian term applied to the component parts of a subah or province, each of which is administered by a deputy governor. These Northern Circars were five in number, Chicacole, Rajahmundry, Ellore, Kondapalli and Guntur, and their total area was about 30,000 square miles (78,000 km2). 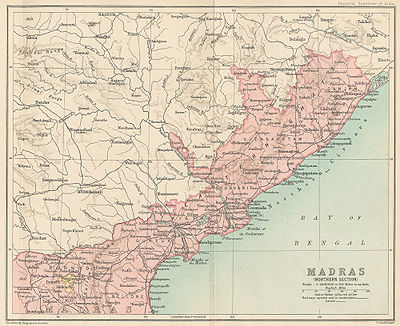 The region corresponds in the main to the Coastal Andhra region of Andhra Pradesh, including the districts of Krishna, East Godavari, West Godavari, Visakhapatnam, Vizayanagaram, Srikakulam, Prakasam and Guntur, as well as Gajapati and Ganjam districts of Orissa. The region was invaded by the Bahmani Sultanate in 1471; in 1541 they conquered Kondapalli, and nine years later they extended their conquests over all Guntur and the districts of Masulipatam. The sultans appear to have acquired only an imperfect possession of the country, as it was again wrested from the Hindu princes of Orissa about the year 1571, during the reign of Ibrahim, of the Qutb Shahi dynasty of Golconda and Hyderabad. In 1687 the Circars were added, along with the Golconda Sultanate, to the extensive empire of Aurangzeb.

In 1724, Asaf Jah, governor of Hyderabad, declared his independence from the disintegrating Mughal Empire, claiming the title of Nizam al Mulk of Hyderabad. Salabat Jang, the son of the Nizam al Mulk, who was indebted for his elevation to the throne to the French East India Company, granted the district of Kondavid or Guntur to the French in return for their services, and soon afterwards the other circars. In 1759, by the conquest of the fortress of Masulipatam, the dominion of the maritime provinces on both sides, from the river Gundlakamma to the Chilka Lake, was necessarily transferred from the French to the British. But the British left them under the administration of the Nizam, with the exception of the town and fortress of Masulipatam, which were retained by the British East India Company. In 1765 Lord Robert Clive obtained from the Mughal emperor Shah Alam a grant of the five Circars. Hereupon the fort of Kondapalli was seized by the British, and on November 12, 1766 a treaty of alliance was signed with Nizam Ali by which the Company, in return for the grant of the Circars, undertook to maintain troops for the Nizam's assistance. By a second treaty, signed on March 1, 1768, the nizam acknowledged the validity of Shah Alam's grant and resigned the Circars to the Company, receiving as a mark of friendship an annuity of 50,000. Guntur, as the personal estate of the Nizam's brother Basalat Jang, was excepted during his lifetime under both treaties. He died in 1782, but it was not till 1788 that Guntur came under British administration. Finally, in 1823, the claims of the Nizam over the Northern Circars were bought outright by the Company, and they became a British possession.

The Northern Circars were governed as part of Madras Presidency until India's independence in 1947, after which the presidency became India's Madras state. The northern, Telugu-speaking portion of Madras state, including the Northern Circars, was detached in 1953 to form the new state of Andhra state. Andhra state was merged with Telangana in 1956 to form the state of Andhra Pradesh.