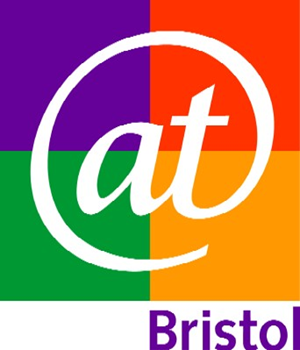 At-Bristol is a public and "exploration" and education centre in , . At its opening the centre consisted of "Explore", which contains features on , sound and light, , and the ; "Wildwalk", a science centre comprising two artificial , aquariums and other -related exhibits; and an IMAX theatre.

"Wildwalk" and the IMAX Theatre closed at the end of March 2007 due to a lack of funding and government support.

The project opened in 2000 as the successor to the "Exploratory", a large science and demonstration centre in the former terminus at Station (now home to the ), but moved to a city centre site as part of the regeneration of the historical Floating Harbour. The project was funded with £44.3 million from the , , South West of England , and a further £43.4 million from commercial partners (including a controversial donation from ) and Bristol City Council.

The centre is situated on the former Canon's Wharf. "Wildwalk" and the cinema occupied a modified 19th century former lead-works building, and "Explore" occupies a 1906 railway measuring 540 ft by 133 ft (165 m by 41 m). The goods shed was one of the first buildings to use and both buildings are Grade II listed buildings. The buildings are located around Millennium Square - also part of the regeneration - and , a footbridge across the harbour which links it to the , and Queen Square.

The centre is popularly known as "@Bristol", due to the appearance of its logo. This features the word "at" surrounded by a partial circle, reminiscent of an symbol. However, the official spelling is "At-Bristol", which is how the name appears on the web site and promotional material.

* Move It - The first large area when entering the museum, "Move It" deals with ( in the exhibit "Naturally Newton") and ("Dreams of Flight").
* Your Amazing Brain – The second large section on the ground floor, this area deals with the , in particular and .
* Curiosity Zone – Incorporating most of the upper level, this area deals with , light, , , and also includes a mock .
* Space – This area includes a small exhibit about space travel, and the large Planetarium, in which 4-6 demonstrations are given daily.
* Live Science Zone – An area for special events.

"Explore" is housed in a former , which was renovated to house the centre. The renovations included the addition of a large glass atrium to the North of the building, and stainless-steel sphere to the south, housing the planetarium. The architect behind the renovation was Chris Wilkinson.

The centre comprised a large building (previously a lead-works building) with a ‘living rainforest’ attached to the southern side, and was designed by & Partners.

The botanical house was split into two distinct sections: "Plants on Land", which traced the development of plants from simple mosses through to complex flowering plants; and "Tropical Forests", which showcased plants from tropical continents, including a which produced a rare, bright red cone convert|45|cm|in|abbr=on tall and convert|80|cm|in|abbr=on in circumference in 2003.

Following "Wildwalk"'s closure, all animals and plants were re-homed to other zoos and natural history venues.

Housed in the same building as "Wildwalk", the IMAX theatre was the first of the three At-Bristol attractions to open, on 20 April 2000.

Since opening, the theatre received over 1.1 million visitors, and screened 70 films.

The longest running film, and thus that with the highest attendance figures, was Cyberworld 3D.

Closure of Wildwalk and IMAX

Since opening, At-Bristol had an annual operating deficit of around £1.5 million to be filled by fundraising.

This left only two options: close the whole centre, or close "Wildwalk" and IMAX, enabling existing funds to be channelled exclusively to "Explore". As "Explore" was most popular with visitors, whereas "Wildwalk" and the IMAX theatre were most expensive to run,

The is working alongside Bristol City Council to find new uses for the buildings.

In April 2008 it was announced that the Wildwalk building is to be converted into an aquarium and that the IMAX will be used to show nature and wildlife films. The £4 million plan by firm , intends to provide a site for tropical marine and freshwater creatures by the summer of 2009.

* [http://www.at-bristol.org.uk/ Official At-Bristol Site]
* [http://www.exploratory.org.uk/ The Exploratory (archive site)]
* [http://www.nature.com/nature/journal/v401/n6749/full/401111e0.html#a1 Director of At-Bristol's response to a critical article in Nature] (original article is only available on pay or subscription)