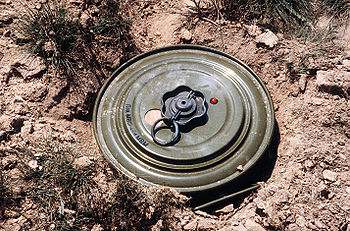 A Russian TM-46 anti-tank blast mine.

An anti-tank mine, (abbreviated to "AT mine"), is a type of land mine designed to damage or destroy vehicles including tanks and armored fighting vehicles.

Compared to anti-personnel mines, anti-tank mines typically have a much larger explosive charge, and a fuze designed only to be triggered by vehicles or, in some cases, tampering with the mine.

While obviously the anti-tank mine as such did not pre-date the deployment of tanks in 1916, essentially identical devices were used earlier against locomotives. For example during the U.S. Civil War, Confederate forces created pressure-activated anti-railroad mines which destroyed at least two trains. [1]

The first anti-tank mines were improvised during the First World War as a counter measure against the first tanks introduced by the British towards the end of the war. Initially they were nothing more than a buried high explosive shell or mortar bomb with its fuze upright. Later purpose built mines were developed, including the Flachmine 17, which was simply a wooden box packed with explosives and triggered either remotely or by a pressure fuze. By the end of the war, the Germans had developed row mining techniques, and mines accounted for 15% of U.S. tank casualties during the Battle of Saint-Mihiel, Third Battle of the Aisne, Battle of Selle and Meuse-Argonne Offensive.

The Soviet Union began developing mines in the early 1920s, and in 1924 produced its first anti-tank mine, the EZ mine. The mine, which was developed by Yegorov and Zelinskiy, had a 1 kg charge, which was enough to break the tracks of contemporary tanks. Meanwhile in Germany, defeat spurred the development of anti-tank mines, with the first truly modern mine, the Tellermine 29, entering service in 1929. It was a disc shaped device approximately 30 cm across filled with about 5 kg of high explosives. A second mine, the Tellermine 35 was developed in 1935. Anti-tank mines were used by both sides during the Spanish Civil War. Notably, Republican forces lifted mines placed by Nationalist forces and used them against the Nationalists. This spurred the development of anti-handling devices for anti-tank mines.

The Winter War between the Soviet Union and Finland also saw widespread use of anti-tank mines. 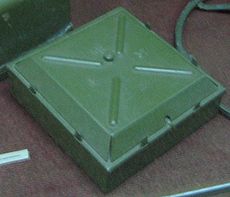 Soviet TM-35 mine at the Museum of Heroic Defense and Liberation of Sevastopol on Sapun Mountain, Sevastopol

The German Tellermine was a purpose built anti-tank mine developed during the period between the First and Second World Wars, the first model being introduced in 1929. Some variants were of a rectangular shape, but in all cases the outer casing served only as container for the explosives and fuze, without being utilized to a destructive effect (e.g. shrapnel).

Although other measures such as satchel charges, sticky bombs or bombs designed to magnetically adhere to tanks were developed, they do not fall within the category of land mines as they are not buried and detonated remotely or by pressure. The Hawkins mine was a British anti-tank device that could be employed as a mine laid on the road surface for a tank to run over setting off a crush fuze or thrown at the tank in which case a timer fuze was used.

Shaped charge devices like the Hohl-Sprung mine 4672 were also developed by Germany later in the war, although these did not see widespread use. The most advanced German anti-tank mine of the war was their minimal metal Topfmine.

In contrast to the "dinner plate" mines such as the German Tellermine were "bar mines" such as the German Riegel mine 43 and Italian B-2 mine. These were long mines designed to increase the probability of a vehicle triggering it, the B2 consisted multiple small shaped charge explosive charges along its length designed to ensure a mobility kill against enemy vehicles by destroying its tracks. This form of mine was the inspiration for the British L9 Bar Mine.

Several advances have been made in the development of modern anti-tank mines, including:

More modern anti-tank mines are usually more advanced than simple containers full of explosives detonated by remote or the vehicles pressure. The biggest advances were made in the following areas:

Most modern mine bodies or casings are made of plastic material to avoid easy detection. They feature combinations of pressure or magnetically activated detonators to ensure that they are only triggered by vehicles.

There are several systems for dispersing mines to quickly cover wide areas, as opposed to a soldier laying each one individually. These system can take the form of cluster bombs or be artillery fired. Cluster bombs contain several mines each, which could be a mixture of anti-personnel mines. When the cluster bomb reaches a preset altitude it disperses the mines over a wide area. Some anti-tank mines are designed to be fired by artillery, and arm themselves once they impact the target area. 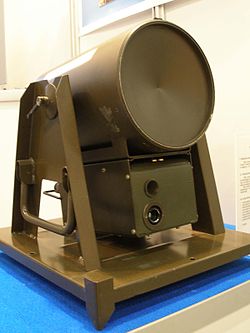 This is the term used to describe mines that are designed to be effective when detonated next to a vehicle instead of underneath the vehicle. They are useful in cases where the ground or surface is not suitable to bury a mine. They normally employ a shaped charge to focus the explosive effect in order to pierce armour. However the self forging projectile principle has been used for some French and Soviet off route mines and has earned infamy as an improvised explosive devices (IED) technique in Iraq.

One example of such a device is the US M24 that consists of a rocket launcher tube firing a HEAT rocket that is detonated by a pressure sensitive tape switch laid across the road.

The term "off-route mine" refers to purpose designed and manufactured anti-tank mines, but most "home made" IEDs are employed in a similar manner.

The most effective countermeasure deployed against mine fields is mine clearing, using either explosive methods or mechanical methods. Explosive methods, such as the Giant Viper, involve laying explosives across a minefield, either by propelling the charges across the field with rockets, or by dropping them from aircraft, and then detonating the explosive, clearing a path. Mechanical methods include plowing and pressure-forced detonation. In plowing, a specially designed plow attached to the front end of a heavily armored tank is used to push aside the earth and any mines embedded in it, clearing a path as wide as the pushing tank. In pressure-forced detonation, a heavily armored tank pushes a heavy spherical or cylindrical solid metal roller ahead of it, causing mines to detonate. 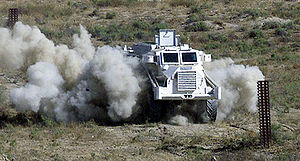 There are also several ways of making vehicles resistant to the effects of a mine detonation to reduce the chance of crew injury. In case of a mine's blast effect, this can be done by absorbing the blast energy, deflecting it away from the vehicle hull or increasing the distance between the crew and the points where wheels touch the ground - where any detonations are likely to centre.

A simple, and highly effective, technique to protect the occupants of a wheeled vehicle is to fill the tires with water.[2] This will have the effect of absorbing and deflecting the mine's blast energy. Steel plates between the cabin and the wheels can absorb the energy and their effectiveness is enhanced if they can be angled to deflect it away from the cabin. Increasing the distance between the wheels and cabin, as is done on the South African Casspir personnel carrier, is an effective technique although there are mobility and ease of driving problems with such a vehicle.

Steel plates and armoured glass will protect the occupants from fragments. Mounting seats from the sides or roof of the vehicle, rather than the floor, will help protect occupants from shocks transmitted through the structure of the vehicle and a four-point seat harness will minimise the chance of injury if the vehicle is flung onto its side or its roof - a mine may throw a vehicle 5 - 10 m from the detonation point.

Anti-tank mines have played an important role in most wars fought since they were first used.

Anti-tank mines are still deployed along the demilitarized zones established and maintained between North Korea and South Korea since the signing of the armistice that "ended" the Korean War.

During the Vietnam War, both 'regular' NVA and Viet Cong forces used AT mines. These were of Soviet, Chinese or local manufacture. Anti-tank mines were also used extensively in Cambodia and along the Thai border, planted by Pol Pot's Maoist guerrillas and the Vietnamese army, which invaded Cambodia in 1979 to topple the Khmer Rouge. Millions of these mines remain in the area, despite clearing efforts. It is estimated that they cause hundreds of deaths annually.[3]

Conflict in southern Africa since the 1960s have often involved Soviet supported irregular armies or fighters engaged in guerrilla warfare. What makes these conflicts significant to the study of anti-tank mines is that they featured the widespread use of these mines in situations other than conventional warfare (or static minefields) and also saw the development of effective mine resistant vehicles.

In the Angolan Civil War or South African Border War that covered vast sparsely populated area of southern Angola and northern Namibia, it was easy for small groups to infiltrate and lay their mines on roads before escaping again often undetected. The anti-tank mines were most often placed on public roads used by civilian and military vehicles and had a great psychological effect.

Mines were often laid in complex arrangements. One tactic was to lay multiple mines on top of each other to increase the blast effect. Another common tactic was to link together several mines placed within a few metres of each other, so that all would detonate when any one was triggered. 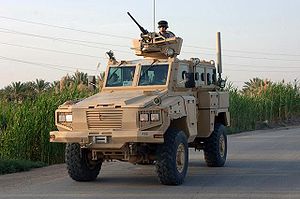 It was because of this threat that some of the first successful mine protected vehicles were developed by South African military and police forces. Chief amongst these were the Buffel and Casspir armoured personnel carriers and Ratel armoured fighting vehicle. They employed v-shaped hulls that deflected the blast force away from occupants. In most cases occupants survived anti-tank mine detonations with only minor injuries. The vehicles themselves could often be repaired by replacing the wheels or some drive train components that were designed to be modular and replaceable for exactly this reason.