The Return of the Native

The Return of the Native

The Return of the Native is Thomas Hardy's sixth published novel. It first appeared in the magazine Belgravia, a publication known for its sensationalism, and was presented in twelve monthly installments from January to December 1878. Due to the novel's controversial themes, Hardy had some difficulty finding a publisher; reviews, however, though somewhat mixed, were generally positive. In the twentieth century, The Return of the Native became one of Hardy's most popular novels.[1]

The novel takes place entirely in the environs of Egdon Heath, and, with the exception of the epilogue, Aftercourses, covers exactly a year and a day. The narrative begins on the evening of Guy Fawkes Night as Diggory Venn drives slowly across the heath, carrying a hidden passenger in the back of his van. When darkness falls, the country folk light bonfires on the surrounding hills, emphasizing—not for the last time—the pagan spirit of the heath and its denizens.

Venn is a reddleman; he travels the country marking flocks of sheep with a red mineral called "reddle", a dialect term for red ochre. Although his trade has stained him red from head to foot, underneath his devilish colouring he is a handsome, shrewd, well-meaning young man. His passenger is a young woman named Thomasin Yeobright, whom Venn is taking home. Earlier that day, Thomasin had planned to marry Damon Wildeve, a local innkeeper known for his fickleness; however, a minor change in disposition as regards to Wildeve delayed the marriage. Thomasin, in distress, ran after the reddleman's van and asked him to take her home. Venn himself is in love with Thomasin, and unsuccessfully wooed her a year or two before. Now, although he knows Wildeve is unworthy of her love, he is so devoted to her that he is willing to help her secure the man of her choice.

At length, Venn reaches Bloom's End, the home of Thomasin's aunt, Mrs. Yeobright. She is a good woman, if somewhat proud and inflexible, and she wants the best for Thomasin. In former months she opposed her niece's choice of husband, and publicly forbade the banns; now, since Thomasin has compromised herself by leaving town with Wildeve and returning unmarried, the best outcome Mrs. Yeobright can envision is for the postponed marriage to be duly solemnized as soon as possible. She and Venn both begin working on Wildeve to make sure he keeps his promise to Thomasin.

Wildeve, however, is still preoccupied with Eustacia Vye, an exotically beautiful young woman living with her grandfather in a lonely house on Egdon Heath. Eustacia is a black-haired, queenly woman who grew up in Budmouth, a fashionable seaside resort. She holds herself aloof from most of the heathfolk; they, in turn, consider her an oddity, and one or two even think she's a witch. She is nothing like Thomasin, who is sweet-natured. She loathes the heath, yet roams it constantly, carrying a spyglass and an hourglass. The previous year, she and Wildeve were lovers; however, even during the height of her passion for him, she knew she only loved him because there was no better object available. When Wildeve broke off the relationship to court Thomasin, Eustacia's interest in him briefly returned. The two meet on Guy Fawkes night, and Wildeve asks her to run off to America with him. She demurs.

Eustacia drops Wildeve when Mrs. Yeobright's son Clym, a successful diamond merchant, returns from Paris to his native Egdon Heath. Although he has no plans to return to Paris or the diamond trade and is, in fact, openly planning to become a schoolmaster for the rural poor, Eustacia sees him as a way to escape the hated heath and begin a grander, richer existence in a glamorous new location. With some difficulty, she arranges to meet Clym, and the two soon fall in love. When Mrs. Yeobright objects, Clym quarrels with her; later, she quarrels with Eustacia as well. 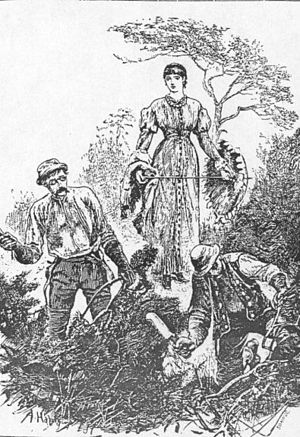 "Unconscious of her presence, he still went on singing." Eustacia watches Clym cut furze in this illustration by Arthur Hopkins for the original Belgravia edition (Plate 8, July 1878).

When he sees that Eustacia is lost to him, Wildeve marries Thomasin, who gives birth to a daughter the next summer. Clym and Eustacia also marry and move to a small cottage five miles away, where they enjoy a brief period of happiness. The seeds of rancour soon begin to germinate, however: Clym studies night and day to prepare for his new career as a schoolmaster while Eustacia clings to the hope that he'll give up the idea and take her abroad. Instead, he nearly blinds himself with too much reading, then further mortifies his wife by deciding to eke out a living, at least temporarily, as a furze-cutter. Eustacia, her dreams blasted, finds herself living in a hut on the heath, chained by marriage to a lowly labouring man.

At this point, Wildeve reappears; he has unexpectedly inherited a large sum of money, and is now in a better position to fulfill Eustacia's hopes. He comes calling on the Yeobrights in the middle of one hot August day and, although Clym is at home, he is fast asleep on the hearth after a gruelling session of furze-cutting. While Eustacia and Wildeve are talking, Mrs. Yeobright knocks on the door; she has decided to pay a courtesy call in the hopes of healing the estrangement between herself and her son. Eustacia looks out at her and then, in some alarm, ushers her visitor out the back door. She hears Clym calling to his mother and, thinking his mother's knocking has awakened him, remains in the garden for a few moments. When Eustacia goes back inside, she finds Clym still asleep and his mother gone. Clym, she now realises, merely cried out his mother's name in his sleep.

Mrs Yeobright, it turns out, saw Eustacia looking out the window at her; she also saw Clym's gear by the door, and so knew they were both at home. Now, thinking she has been deliberately barred from her son's home, she miserably begins the long, hot walk home. Later that evening, Clym, unaware of her attempted visit, heads for Bloom's End and on the way finds her crumpled beside the path, dying from an adder's bite. When she expires that night from the combined effects of snake venom and heat exhaustion, Clym's grief and remorse make him physically ill for several weeks. Eustacia, racked with guilt, dare not tell him of her role in the tragedy; when he eventually finds out from a neighbour's child about his mother's visit—and Wildeve's—he rushes home to accuse his wife of murder and adultery. Eustacia refuses to explain her actions; instead, she tells him You are no blessing, my husband and reproaches him for his cruelty. She then moves back to her grandfather's house, where she struggles with her despair while she awaits some word from Clym.

Wildeve visits her again on Guy Fawkes night, and offers to help her get to Paris. Eustacia realises that if she lets Wildeve help her, she'll be obliged to become his mistress. She tells him she will send him a signal by night if she decides to accept. Clym's anger, meanwhile, has cooled and he sends Eustacia a letter the next day offering reconciliation. The letter arrives a few minutes too late; by the time her grandfather tries to give it to her, she has already signalled to Wildeve and set off through wind and rain to meet him. She walks along weeping, however, knowing she is about to break her marriage vows for a man who is unworthy of her.

Wildeve readies a horse and gig and waits for Eustacia in the dark. Thomasin, guessing his plans, sends Clym to intercept him; she also, by chance, encounters Diggory Venn as she dashes across the heath herself in pursuit of her husband. Eustacia does not appear; instead, she falls or throws herself into nearby Shadwater Weir. Clym and Wildeve hear the splash and hurry to investigate. Wildeve plunges recklessly after Eustacia without bothering to remove his coat, while Clym, proceeding more cautiously, nevertheless is also soon at the mercy of the raging waters. Venn arrives in time to save Clym, but is too late for the others. When Clym revives, he accuses himself of murdering his wife and mother.

In the epilogue, Venn gives up being a reddleman to become a dairy farmer. Two years later, Thomasin marries him and they settle down happily together. Clym, now a sad, solitary figure, eventually takes up preaching.

With its deeply flawed heroine and its (for the time) open acknowledgement of illicit sexual relationships, The Return of the Native raised some eyebrows when it first appeared as a serial in Victorian Britain. Although he intended to structure the novel into five books, thus mirroring the classical tragic format, Hardy submitted to the tastes of the serial-reading public sufficiently to tack on a happy ending for Diggory Venn and Thomasin in a sixth book, Aftercourses. In Hardy's original conception, Venn retains his weird reddleman's character, while Thomasin lives out her days as a widow.[2]

Hardy's choice of themes—sexual politics, thwarted desire, and the conflicting demands of nature and society—makes this a truly modern novel. Underlying these modern themes, however, is a classical sense of tragedy: Hardy scrupulously observes the three unities of time, place, and action and suggests that the struggles of those trying to escape their destinies will only hasten their destruction.[3] To emphasize this point, he uses as setting an ancient heath steeped in pre-Christian history and supplies a Chorus consisting of Grandfer Cantle, Timothy Fairway, and the rest of the heathfolk. Eustacia, who manipulates fate in hopes of leaving Egdon Heath for a larger existence in Paris, instead becomes an eternal resident when she drowns in Shadwater Weir; Wildeve shares not only Eustacia's dream of escape, but also her fate; and Clym, the would-be educational reformer, survives the Weir but lives on as a lonely, remorseful man.

Some critics—notably D. H. Lawrence—see the novel as a study of the way communities control their misfits. In Egdon Heath, most people (particularly the women) look askance at the proud, unconventional Eustacia. Mrs. Yeobright considers her too odd and unreliable to be a suitable bride for her son, and Susan Nunsuch, who frankly believes her to be a witch, tries to protect her children from Eustacia's supposedly baleful influence by stabbing her with a stocking pin and later burning her in effigy. Clym at first laughs at such superstitions, but later embraces the majority opinion when he rejects his wife as a murderer and adulteress. In this view, Eustacia dies because she has internalised the community's values to the extent that, unable to escape Egdon without confirming her status as a fallen woman, she chooses suicide. She thereby ends her sorrows while at the same time—by drowning in the weir like any woman instead of floating, witchlike—she proves her essential innocence to the community.[4]

The first and only film version of The Return of the Native was a television movie released in 1994 in the Hallmark Hall of Fame. The setting for the film is Exmoor rather than Egdon Heath: the film stars Catherine Zeta Jones as Eustacia Vye, Clive Owen as Damon Wildeve, Ray Stevenson as Clym Yeobright, and Joan Plowright as Mrs. Yeobright. Jack Gold directed.

In 2010 a direct-to-video adaptation of The Return of the Native was released. It was directed by Ben Westbrook and is set in Appalachia during The Great Depression.

The novel has also been adapted for the stage several times.