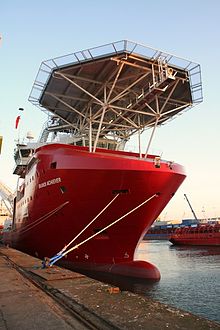 A diving support vessel is a ship that is used as a floating base for professional diving projects.[1]

Commercial Diving Support Vessels emerged during the 1960s and 1970s when the need arose for diving operations to be performed below and around oil production platforms and associated installations in open water in the North Sea and Gulf of Mexico. Until that point most diving operations were from mobile oil drilling platforms, pipe-lay or crane barges. The diving system tended to be modularised and craned on and off the vessels as a package.

As permanent oil and gas production platforms emerged, the owners and operators were not keen to give over valuable deck space to diving systems because after they came on-line the expectation of continuing diving operations was low.

However, equipment fails or gets damaged, and there was a regular if not continuous need for diving operations in and around oil fields. The solution was to put diving packages on ships. Initially these tended to be oilfield supply ships or fishing vessels; however, keeping this kind of ship 'on station', particularly during uncertain weather, made the diving dangerous, problematic and seasonal. Furthermore, seabed operations usually entailed the raising and lowering of heavy equipment, and most such vessels were not equipped for this task.

One of the most successful diving support vessels of the 1980s was the SSSV Uncle John operated by Comex Houlder diving. For 10 years this ship completed numerous underwater pipe joints (hyperbaric tie-ins) and other maintenance work in and around the Shell operated Brent oilfield in the northern North Sea. The Uncle John is a semi-submersible platform design with a 16 man saturation system, 2 diving bells in separate moon pools, 2 cranes and the ability to stay on station and work in fairly extreme weather. The semi-submersible design is very useful for hyperbaric tie-ins because the significant deck space allowed the transportation and manipulation of a 75 tonne welding habitat and pipe manipulation equipment that have the capability of maneuvering 36-inch-diameter, 1.5-inch-thick steel pipe. The Uncle John is currently owned and operated by Caldive International and is active today in the Gulf of Mexico.

A typical working depth in the Brent Field was 140 m. However, in 1983 the Uncle John and its crew successfully completed the Deep Fjord Diving Program in Onarheims Fjord, Norway, where a successful 36-inch hyperbaric tie-in was completed at a depth of 300 m.

Most of the vessels currently in the North Sea have been built in the 1980s. The semi-submersible fleet, the Uncle John and similar, have proven to be too expensive to maintain and too slow to move between fields. Therefore, most existing designs are monohull vessels with either a one or a twin bell dive system. There has been little innovation since the 1980s. However, driven by high oil prices since 2004, the market for subsea developments in the North Sea has grown significantly. This has led to a scarcity of Diving Support Vessels and have driven the price up. Thus, contractors have ordered a number of newbuild vessels which are expected to enter the market in 2008.