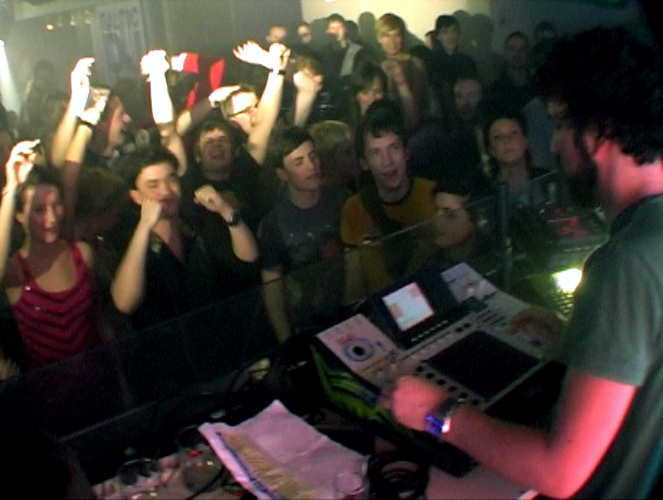 Zombie Nation is a German techno and electro project of the based DJ and producer Florian Senfter (a.k.a. Splank!).

The first Zombie Nation five track EP was released in the spring of 1999 on 's label, . A remix of the song on this debut release landed in high chart-positions all over the world.

Since 2001, Florian Senfter has released tracks on different labels under Zombie Nation and his other pseudonym . In 2002 he did not renew his contract with and started his own label, Dekathlon Records, where he released the second Album "Absorber" in 2003. In early 2005, the new sublabel UKW Records was launched with John Starlight's "John's Addiction Part 1" followed by "Paeng Paeng 12" by Zombie Nation which was recorded a few months later. realized the potential of that song at first glance and licensed it for his imprint. The the 3rd Album "Black Toys" which was released in 2006 on UKW Records Zombie Nation is a bass dominated [ [http://www.365mag.com/index.php?pg=mucd&recnum=2448&Title=Black+Toys+on+365MAG+International+Music+Magazine] review] from tech-hop [ [http://www.bpmmagazine.net/musicreviewitem.aspx?id=1616] BPM article] to -laden house [ [http://www.bpmmagazine.net/musicreviewitem.aspx?id=1616] BPM article] .In 2007 Zombie Nation collaborated with Tiga under the pseudonym ZZT on the recording "Lower State of Consciousness".

Zombie Nation is also known today as liveact. Different from a he uses musical on stage to create sounds. The main instrument is an Akai MPC 4000 [ [http://www.timeout.com/newyork/articles/clubs/21434/monster-smash] interview] which he uses in combination with a and several s to do a live and Mix of his music.

The first Zombie Nation Record contained the song "Kernkraft 400", German for "Atomic Energy 400," which is considered one of the most famous songs of . The song featured one of 's small songs from the 1984 game "" called "Stardust". Soon after the first independent release in 1999 the song developed into an underground hit in European clubs, and was licensed to various countries including a more commercial remix version by Italian remix-producer DJ Gius.

The song, specifically the "Sport Chant Remix", is popular at n sporting events. It is used by numerous arenas as their goal-celebration song, particularly in the , and many more as a motivational beat.

Many people believe the band to be named "Kernkraft 400" and the song to be "Zombie Nation". This is most likely due to a combination of factors, including that the song´s only lyrics are "Zombie Nation," and , where anyone can change the name of a file and thousands can download it in a short period of time, which became popular soon after the song was released.

Recently, Memphis, Tennessee-based remixed "Kernkraft 400" into a track from their 2008 album release, "." Track number 5, "I Got," features the chanting as the prominent bassline-accompanying melody and also a selection of the late Houston, Texas-based rapper 's last recorded lyrics.