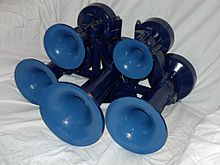 Train horns are audible warning devices found on most diesel and electric locomotives. Their primary purpose is to alert persons and animals to the presence of a train, especially when approaching a grade crossing. They are also used for acknowledging signals given by railroad employees (i.e. during switching operations).

As diesel locomotives began to replace steam on most railroads, it was realized that the new locomotives were unable to efficiently utilize the steam whistles then in use.

Early internal combustion locomotives were initially fitted with small truck horns or exhaust-powered whistles, but these were found to be unsuitable and so the air horn design was scaled up and modified for railroad use. 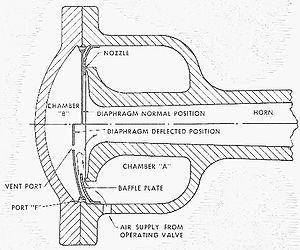 Train horns are operated by compressed air, typically 125-140 psi (8.6-9.6 bar), and fed from a locomotive main air reservoir. The flow of air throughout the horn produces an action known as oscillation. Oscillation in a train horn is accomplished via a diaphragm assembly enclosed within the power chamber. When air is applied to the horn, the diaphragm vibrates against a nozzle. The oscillation of the diaphragm against the nozzle produces sound.

The configuration and overall dimensions of the bell ("bell" being the correct term for the trumpet assembly) determine the fundamental and frequency produced (measured in hertz).

North American diesel locomotives manufactured prior to the 1990s utilized an air valve actuated by the engineer through the manipulation of a lever or pull cord. Use of this method made possible a practice known as "feathering", meaning that modulation of the horn's volume was possible through finer regulation of the air valve.

Many locomotives manufactured during the 1990s made use of pushbutton controls. In addition, several North American locomotives incorporated a sequencer pedal built into the cab floor beneath the operators position; that when depressed, sounded the grade crossing sequence.

Locomotives of European origin have featured pushbutton control of air horns since the mid-1960s.

There have been several manufacturers of air horns for railroad use in North America over the years.

AirChime, Ltd. traces their beginnings through the work of Robert Swanson in 1949. Prior to the early 1950s, locomotives were equipped with airhorns that sounded but a single note.

Swanson sought to develop an air horn which would mimic the sound of a classic steam whistle. Using ancient Chinese musical theory, Swanson produced the six-note model 'H6'. This was impractical for railroad use, due to its relatively large size. Railroad equipment operates over routes restricted by loading gauge, a difference of only a few inches may prohibit that equipment from operating on the line in question.

Swanson would later refine his 'H6' into the model 'H5'. As the numeric designation indicates, the horn sounds a five-note chord.

In 1950, AirChime introduced the 'M' series, a further improvement on the earlier horns through elimination of unnecessary moving parts. Among the earliest customers of the AirChime 'M' was the Southern Railway, who sought replacement horns for their motive power. In a public relations effort, the company announced this program through the placement of a full-page advertisement in the May 25, 1951 edition of the Washington Times-Herald. 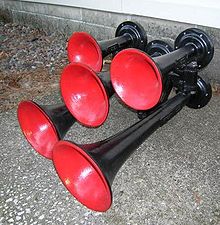 Under Swanson's guidance, AirChime would focus on ease of mass production, low maintenance, and reliability in their air horn design, with the development of the 'P' (1953), and 'K' (1954) series. 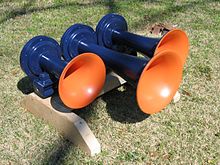 As of recent, AirChime has been sold to their American licensee, Nathan Manufacturing, Inc., a division of Micro Precision Group, Inc, in Windham, Connecticut.[1] 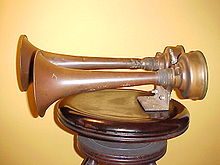 An air horn manufactured by the American Strombos Co., used on early locomotives as well as trucks

Originally founded in 1912 as The American Strombos Co. of Philadelphia, PA, Buell sold modified truck horns for rail use. They were often installed on small locomotives, electric interurban equipment. and railcars (for example the Doodlebugs).

Buell has recently made available a line of air horns specific for railroad equipment.[2]

The Gustin Bacon Mfg. Co. of Kansas City, MO offered airhorns for use on railroad equipment prior to the Second World War. 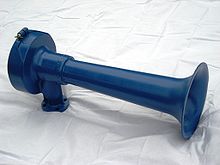 The Leslie Company (originally of Lyndhurst, New Jersey, later Parsippany, finally relocating to Tampa, Florida in 1985) began horn production by obtaining the rights to manufacture the Kockums Mekaniska Verkstad product line of "Tyfon" brand airhorns, marketing these for railroad use beginning in the 1930s. Their model A200 series would later grace the rooftops of countless locomotives, such as the legendary Pennsylvania Railroad GG1, as well as thousands of EMD E and F-units. Leslie eventually introduced their own line of multi-note airhorns, known as the "Chime-Tone" series, in direct competition with AirChime.

Poor sales of the Chime-Tones (due to the horns requiring an ample volume of air) led the Leslie Company to introduce a new line of air horns utilizing interchangeable components while using less air to produce greater sound volume than the earlier "Tyfon" series. Developed by Kockums, this horn utilized a back-pressure power chamber design in order to enhance diaphragm oscillation. Known as the "SuperTyfon" series, these horns would eventually supplant the "Tyfon" in railroad service. 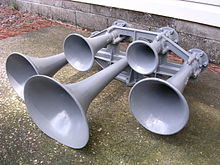 Leslie SuperTyfon model S-5T, regarded by many aficionados as the 'king of horns'

Today, the company is known as Leslie Controls, Inc., and continues to manufacture "SuperTyfon" air horns for the railroad industry.[8] 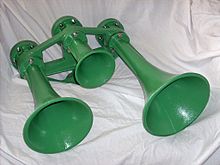 Prime Manufacturing, Inc. had produced locomotive appliances for many years prior to their entry into the air horn market in 1972. Their line of "Pneumatic Horns" was basically a derivative of the Leslie SuperTyfon design (having taken advantage of a patent expiration at the time), though their horns employed heavier castings than equivalents from Leslie, and sounding a somewhat richer timbre as a result.

Sales were brisk (railroads such as Union Pacific and the Burlington Northern were notable customers), but ultimately disappointing. Finding themselves increasingly unable to compete in a niche market dominated by Leslie and AirChime, Prime ceased air horn production c. 1999. 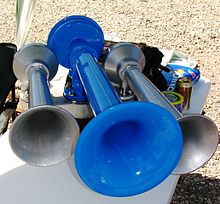 Westinghouse Air Brake Company (known throughout the 19th and 20th Century as WABCO) was the first to offer air horns specifically for use with railroad equipment, as early as the 1910s. Their model E2 was recognized by many for the deep, commanding tone it produced.

In response to the Leslie multi-note "Chime-Tone" series, Westinghouse offered a bracket to which three of their single-note "honkers" could be bolted onto, achieving the same result as what the Chime-Tones did for Leslie.

Overshadowed later on by Leslie and AirChime, WABCO eventually ceased production of most horns for the North American market.

At present, the company is known as Wabtec, Inc., and continues to offer their line of 'Pneumatic horns' for the export market.[9]

Railways in Australia often utilize the same type of air horns as their North American counterparts. Examples from both the Leslie Co. and AirChime Ltd. can be found there.

On April 27, 2005, the Federal Railroad Administration (FRA), which enforces rail safety regulations, published the final rule on the use of locomotive horns at highway-rail grade crossings.[10] Effective June 24, 2005, the rule requires that locomotive horns be sounded at all public grade crossings at least 15 seconds, but not more than 20 seconds before entering a crossing. This rule applies when the train speed is below 45 mph (70 km/h). At 45 mph or above, trains are still required to sound their horn at the designated location (usually denoted with a whistle post).

The pattern for blowing the horn remains two long, one short, and one long. This is to be repeated as necessary until the lead locomotive fully occupies the crossing. Locomotive engineers retain the authority to vary this pattern as necessary for crossings in close proximity, and are allowed to sound the horn in emergency situations no matter where the location.

A ban on sounding locomotive horns in Florida was ordered removed by the FRA after it was shown that the accident rate doubled during the ban. The new ruling preempts any state or local laws regarding the use of the train horn at public crossings. This also provides public authorities the option to maintain and/or establish quiet zones provided certain supplemental or alternative safety measures are in place, and the crossing accident rate meets government standards.

The following are the required horn signals listed in the operating rules of most North American railroads, along with their meanings. Signals are illustrated by an "o" for short sounds, and "–" for longer sounds. (Note that these signals and their indications are updated to reflect modern practice.) Those rules marked with an asterisk (*) must be sounded when and/or where applicable. Those signals without an asterisk convey information to employees; they must be used when voice communication is not available.

Exception: Engine horn signals required by rules 14 (b) and 14 (h) do not apply after momentary stops in continuous switching movements.

Horn signals are regulated in the Zp category of the Eisenbahn-Bau- und Betriebsordnung. Their most common use today is when approaching a level crossing that lacks barriers, and for warning purposes.

Whistle posts are labeled with the letter "P" (for 'Pfeifen'). Common signals are:[11]

Train horns are sounded where a whistle post (marked with the letter "S" for "siffler") is present. If the whistle post is labelled "J" (meaning "jour"), the horn is only to be sounded between 0700 and 2000. Horns must also be sounded when passing an oncoming train, and shortly before reaching the last car of the train.

Locomotive horns are sounded before trains enter a station and upon departure, passing over bridges as well as road crossings.

UK diesel and electric locomotives are usually fitted with two-tone horns and, in the past, both tones were routinely used. However, because of noise complaints, new rules were introduced in 2007:[12]

As many individuals do with their personal vehicles, railroads order locomotives with different options in order to suit their operating practices. Air horns are no exception, and railroad mechanical forces mount these on locomotives where they are deemed most effective at projecting sound, and for ease of maintenance.

Below are a few images depicting the most common mounting applications:

Due to the encroachment of development, some suburban dwellers (known derisively as NIMBYs and CAVE People) have opposed railroad use of the air horn as a trackside warning device.[13] Residents in some communities have attempted to establish quiet zones, in which train crews are instructed not to sound their horns, except in case of emergency.[14] Given train velocity, as well as the disparity in mass between railroad equipment and an automobile, truck, or pedestrian, collisions often occur with little or no allowance for preventative action to be taken by the train crew. The effects of a train colliding with an automobile have been likened to that same automobile striking an empty soda can.[15]

Recent years have seen an increase of horn theft from railroad property.[16] It is believed that the majority of these crimes are perpetrated for the benefit of vehicle customizers and truckers. 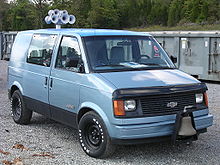 Chevrolet Astro modified with the addition of a locomotive horn and bell.

Some people collect train horns for their rarity and nostalgic value. Enthusiasts often attend organized events, where specially modified motor vehicles (actual railroad locomotives in some instances) perform runbys. This differs from those who use air horns as a public nuisance, in that permission is often secured from local property owners to conduct such events.[17]

In the world of sports, train horns are often used as goal horns in ice hockey.

The following are samples of select air horns as used in North American railroad service:[18] 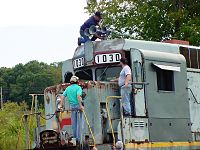 Train horn being fitted to a vintage EMD GP30 diesel locomotive at the 2006 Oak Ridge Horn Honk and Collectors Meet.