The music of Burma (or Myanmar) has similarities with and is related to many other musical traditions in the region, including Chinese music and Thai music. 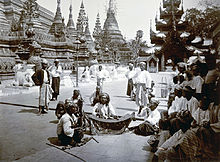 Burmese musicians performing at the Shwedagon Pagoda in 1895.

Traditional music from Burma is melodious, generally without harmony, and usually in 4/4 time (na-yi-se) or 2/4 (wa-let-se) or 8/16 (wa-let-a-myan). There are "the segments combined into patterns, combined into verses, combined into songs [that] make Burmese music a multileveled hierarchical system...The Burmese musician manipulates the various levels of the hierarchy to create the song..." (Becker 1969, p. 272)

Orthodox Theravada Buddhism frowns upon music as being decadent, but the Burmese monarchy as well as infusion of different regional music styles, created several classical traditions of Burmese music. The oldest influences may perhaps come from China, which shares a similar pentatonic musical scale as classical Burmese msuci.[1] Other influences include Mon music (called Talaing than or "sounds of the Talaing [Mon]"), particularly in the Mahagita (မဟာဂိတ), the complete body of classical Burmese music.[2][3] A prevailing one is called yodaya (ယိုးဒယား), which is essentially a class of Burmese adaptations to songs accompanied with the saung gauk and come from the Ayutthaya kingdom (modern-day Thailand) during the reigns of Bayinnaung (1551–1581) and Hsinbyushin (1753–1776), which brought back a variety of cultural traditions including the Ramayana.[1] The primary indigenous form is called thachin (သချင်း).

Burmese classical music ensembles can be divided into outdoor and indoor ensembles. The outdoor musical ensemble is the sidaw (စည်တော်; also called sidawgyi (စည်တော်ကြီး), which was an outdoor ensembles in royal courts used to mark important ceremonial functions like the royal ploughing ceremony.[2] It consists of a hnegyi (နှဲကြီး), a large double reed pipe and sidaw(စည်တော်), a pair of ceremonial drums, as well as the si (စည်း) and wa (ဝါး), a bell and clapper and the gandama, a double-headed drum. Today, sidaw music is played at festivals. Other instruments used in classical music include the saung (a harp) and pattala (a xylophone). The indoor form is the chamber music ensemble, which is basically a female singer accompanied by a traditional ensemble consisting of the saung (စောင်း), pattala (ပတ္တလား), migyaung (မိကျောင်း, a zither), palwe ((ပလွေ, a flute) and in the past, included the tayaw (တယော, a fiddle) and hnyin (a small mouth organ).[4]

Burmese music includes a variety of folk traditions. A distinct form called the byaw (ဗျော), is often played at religious festivals and is sung to the beat of a long and thin drum, with occasional interruptions by the beating of a larger drum.[5]

The traditional folk ensemble, typically used in the nat pwe, Burmese theater and art, and festivals is called the hsaing waing (ဆိုင်းဝိုင်း). Although its origin is unknown, it is believed to have come from the Ayuthaya kingdom, or in the least been heavily influenced by the Ayuthaya gong and drum ensembles in the 18th century through repeated invasions by the Konbaung dynasty and has many similarities to other Southeast Asian ensembles.[2] The ensemble is made up of a series of drums and gongs, including the centerpieces, which are the hne (double reed pipe) and pat waing or hsaing wan (ဆိုင်းဝိုင်း, set of 21 tuned drums in a circle).[2] Other instruments in this ensemble include the kyi waing (ကြေးဝိုင်း, small bronze gongs in a circular frame) and maung hsaing (မောင်းဆိုင်း, larger bronze gongs in a rectangular frame), as well as the si and wa (bell and clapper) and the recent addition of the chauk lone bat (a group of six drums which have gained currency since the early 20th century).[2] Hsaing waing music, however, is atypical in Southeast Asian music, characterized by sudden shifts in rhythm and melody as well as change in texture and timbre.[6] 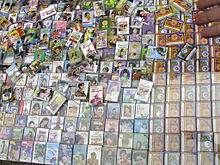 Western music gained much popularity in Burma starting from the 1930s. Despite government intervention at times, especially during the Socialist era, popular Burmese music has become considerably influenced by Western music, which consists of popular Western songs rendered in Burmese and pop music similar to other Asian pop tunes.[6] Classical music was also introduced during the British occupation.

Rock music, called stereo in Burmese has been a popular form of music since the 1980s, having been introduced in the 1960s.[7] Pop music emerged in the 1970s and was banned by state-run radio stations. However, many artists circumvented this censorship by producing albums in private studios and releasing them in music production shops.[8] During the Socialist era, musicians and artists were subject to censorship by the Press Scrutiny Board and Central Registration Board, as well as laws like the State Protection Law.[8] During this period, the arrival of various bands including the influential Thabawa Yinthwenge (The Wild Ones), which included lead singer Sai Htee Saing, an ethnic Shan in 1973, paved the way for ethnic minority musicians to gain visibility in the Burmese music industry.[8]

During the 8888 Uprising, restrictions loosened and many artists began writing music with themes of freedom and democracy. However, after the State Law and Order Restoration Council usurped power in 1988, the Press Scrutiny Board was reformed to censor specific political and social issues, including poverty, the sex trade, democracy and human rights. The Myanmar Music Asiayon (MMA) was established by the SLORC to further censor Burmese-produced music. Popular musicians including Zaw Win Htut and Sai Htee Saing have produced propaganda albums written by military officers such as Mya Than San.[8]

Hip hop and rap emerged in the late 1990s and is now the prevailing genre of music among Burmese youth today.[8] Bands like Iron Cross, Emperor and BigBag are popular among the middle-aged and some groups of youth. There are hip-hop enthusiasts all over Burma with artists such as Ye Lay, Sai Sai, and J-me. Thus, there are many underground rock, punk and metal bands such as All Else I Fail, Last Day of Beethoven, Yakkhadeva, Temper Level VIII, Tha Ta Lin Chate, Idiots, Offkeys, etc. The prevalence of Burmese cover songs (particularly from Asia nowadays) has led to the adoption of "copy tune" and "own tune" to describe the origins of a song's melody.

Musical instruments include the brass se (which is like a triangle), hne (a kind of oboe) and bamboo wa, as well as the well-known saung, a boat-shaped harp.[9] Instruments are classified into six groups:

These instruments are played in a musical scale consisting of seven tones, each associated with an animal that is said to be the producer of the tone. Each tone can be played raised, lowered or natural (corresponding to sharp, flat or natural), resulting a possible twenty-one combinations. The Pat Waing drum circle, for example, consists of twenty-one drums, one tuned to each tone in each possible combination, and the saing saya (maestro) sits in the middle using various parts of his hands to strike the drums in order to produce a melody. The Kyi Waing is the gong circle strung up in the same fashion and the gongs are struck with a knobbed stick and in accompaniment to the pat waing.[9]

The Burmese harp is of special significance. It dates back to the 9th century, though it has changed quite a bit since then, expanding, for example, from three strings to sixteen. During the Konbaung period (1752–1885), courtly musicians included Ma Mya Galay, a queen, Hlaing Hteikhaung Tin, a princess, Myawaddy Mingyi U Sa, a minister, and Nat Shin Naung, King of Taungoo.

Beginning just before World War II, the piano was adapted to the performance of Burmese traditional music, modeling its technique after that of the patala and saung. The best known performer of Burmese piano was Gita Lulin Maung Ko Ko, known as U Ko Ko (1928–2007).[1]