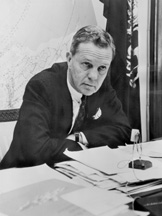 Joseph Sill Clark, Jr. (, &ndash; , ) was a U.S. and Democratic Party in the mid-20th century. He served as the mayor of Philadelphia from 1952 until 1956, and as a United States Senator from from 1957 until 1969. Clark was the only elected to a major Pennsylvania office in the modern era.

Clark began his career as a lawyer when, in 1941, he was called up to military service for , rising to in the before mustering out in 1945. He won the Bronze Star, the , and an honorary OBE for his wartime service in the China-Burma-India theater.

After the war, Clark became involved in Philadelphia city politics as a reform Democrat. Running against a long-entrenched and openly corrupt Republican machine, he won the position in 1949, then moving up to mayor three years later. His Administration was distinguished by a new Home Rule Charter, and by a newly-active Philadelphia City Planning Commission, led after 1949 by . On the strength of his mayoral record, he won the Democratic nomination for the U.S. Senate in 1956, and went on to beat incumbent in the general election. Clark was succeeded by his reform colleague H. .

Clark won re-election to the Senate in 1962. Clark's relatively liberal record, including opposition to the , and support for gun control after the assassinations of Sen. and , caused his defeat in the 1968 senatorial election to Republican , whose career in the Senate was as a liberal Republican.

After his defeat, Clark became president of World Federalists USA until 1971. He lived the rest of his life in Philadelphia, dying at age 88 on January 12, 1990.