The British Rail Class 312 is a type of alternating current (AC) electric multiple unit (EMU) built in 1975-1978[1] for use on outer-suburban passenger services. It was the last class of multiple unit to be constructed with the British Rail Mark 2 bodyshell, and also the last with slam doors. This latter feature contributed to their relatively early withdrawal (25-28 years old, compared with a life expectancy of 30 years).

The table below illustrates the original formation, numbering and areas of use:

These units were based on the Class 310, used on the suburban services out of London Euston. The only significant difference between the various sub-classes was that the 312/1 units were also equipped to work on the 6.25 kV AC overhead electrification system used on parts of the Great Eastern Main Line and London, Tilbury and Southend Railway networks. 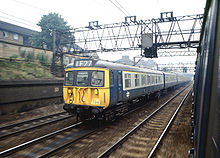 The front of a British Rail Class 312 in 1970s blue/grey livery passes through East London on a working to London Liverpool Street Station, as seen from the open window of another train. 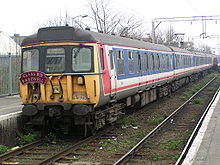 312792 at Shoeburyness in Essex on 29 March 2003. This was the final day of operation of the class on c2c. This unit is painted in Network SouthEast livery. Since this photograph was taken, part of this unit has been preserved.

During the late 1980s, the units received an interior refurbishment that saw the wooden panel interiors covered with fascia panels, the removal of window blinds and other alterations. At the same time the units lost their blue/grey livery (312/1 and 312/2 units had been all-over blue when introduced) in favour of Network SouthEast (NSE) livery (the four 312/2 units carried West Midlands PTE yellow and blue livery before their transfer to NSE).

During the late 1980s the units were reallocated to new areas. The class 312/0 units moved to the Great Eastern Line following the delivery of class 317 units; the 312/1 units consequently moved to the London, Tilbury and Southend line, displacing older class 302 and 305 units. The class 312/2 units also moved to the Great Eastern, replaced by modified 310 units released by the arrival of class 321 units. These moves were complete by the end of the 1980s, and allocations remained broadly stable until their withdrawal during 2003-04.

Upon privatisation, the fleet was divided between three franchises.

Central Trains inherited four units, 312725-728. These were primarily used on fast Birmingham New Street to Liverpool Lime Street services, and were painted in Regional Railways livery. Their stay with Central Trains did not last long and they were transferred to LTS Rail (since rebranded c2c) in 1996.

First Great Eastern inherited 24 units, 312701-724. These were used mainly on Colchester to Walton-on-the-Naze and Manningtree to Harwich services and London Liverpool Street to Ipswich and Clacton peak trains. In later years, two former LTS units, 312728/784, were acquired to replace accident-damaged units such as 312707, written off by an arson attack whilst stabled at Colchester Station.

In 2003, First Great Eastern acquired new class 360 units to replace these trains. Units were gradually removed from traffic, and by March 2004 only three sets, 312718/721/723, remained in service. A farewell charter train operated on their previous routes using two of these units. The final sets were used on peak trains, and were withdrawn in July 2004 after the arrival of five class 322 units that had been on hire to ScotRail.

The final units were withdrawn from service in 2003, having been replaced by new class 357/2 "Electrostar" units. Two units were later transferred to First Great Eastern to supplement their fleet.

A First Great Eastern class 312 at Manningtree station, Essex in 2001.