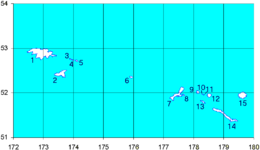 The Near Islands or Sasignan Islands (Aleut: Sasignan tanangin[1]) are the smallest and westernmost group of the Aleutian Islands in southwestern Alaska.

The largest of the Near Islands are Attu and Agattu. Besides a few rocks in the channel between Attu and Agattu, the other important islands are the Semichi Islands to their northeast, notable among which are Alaid, Nizki and Shemya.

About 20 miles to the east-southeast from Shemya are small rocky reefs known as the Ingenstrem Rocks.

The islands were named Near Islands by Russian explorers in the 18th century because they were the nearest of the Aleutian Islands to Russia. They are the farthest of the islands from mainland Alaska.

During the Second World War, the Japanese Imperial Army occupied the Near Islands in 1942. American forces retook the islands during the Aleutian Islands Campaign in 1943.