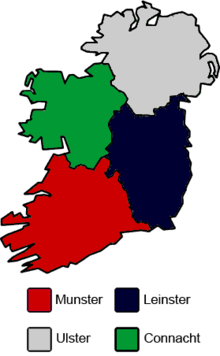 Connacht Rugby (more commonly known as Connacht) is an Irish professional rugby union team based in Connacht that competes in the RaboDirect Pro12 comprising teams from the Celtic nations plus Italy. Normally, it also competes in the second-tier pan-European club competition, the European Challenge Cup. However, in the upcoming 2011–12 season Connacht will instead compete in the top-tier Heineken Cup. The team represents the Irish Rugby Football Union's (IRFU) Connacht Branch, one of four primary branches of the IRFU. As such, it is responsible for rugby union in the Irish province of Connacht.

The team plays its home games at the Galway Sportsgrounds, which can normally hold 5,000 spectators though is expandable to 7,000 for important games. Connacht play in a predominantly green jersey with some black, black shorts and green and black socks. The Connacht Rugby crest is a modified version of the provincial flag of Connacht and consists of a dimidiated eagle and an arm wielding a sword.

Through the work of the Connacht Branch and the support of the IRFU, the province over the last five years has had the largest growth in underage and schools participation in Ireland.

The Connacht Branch of the IRFU was founded in 1885 and is currently made up of 19 clubs. Connacht was the first ever Irish provincial team to win in France and England in 1997. Connacht were quarter finalists in the European Challenge Cup in 1997/98. In 2001/02 Connacht made it to the semi -finals of the Celtic League, but only reached the quarters in 2002/03.

The 2003/04 season was the most successful in the province's history. Their efforts in the Parker Pen Challenge Cup took them to within touching distance of the final. Only a try from Harlequins' Will Greenwood 12 minutes from time in the second leg of the semi-final denied them a place in the final. Harlequins went on to win the final at Reading's Madejski Stadium. They also got to the semi-final of the Celtic Cup. The 2004/05 season saw Connacht continue their form in the European Challenge cup, reaching the semi-finals where they were knocked out again over two legs by the eventual winners, Sale Sharks.

Connacht will make their first-ever Heineken Cup appearance in 2011–12, thanks to Leinster winning the 2011 Heineken Cup Final. By competition rules, the winner of the Heineken Cup receives an automatic berth in the following year's competition, which passes to another team from that country if the winner is already qualified by domestic performance (with exceptions that do not apply to Ireland). As Leinster were qualified through the Celtic League, Connacht claimed the extra berth.[2]

With a smaller playing population than the other provinces, a larger proportion of its players are recruited from within the rest of Ireland usually as promising former Under-21 or Youth Internationals. In recent years however a growing number of young Connacht born players are progressing from the province's under-age rugby sides via development contracts into the senior squad. However funding inequalities from the IRFU compared to that of the other three Irish provinces means that Connacht players who develop are often prone to being recruited by the other provinces and clubs outside Ireland.

The Irish Rugby Football Union IRFU has designated Connacht as a development team, which means that it receives only half the budget of the other Irish Provincial teams. In recent years the IRFU discussed whether they should be closed down as a means of cost saving by the IRFU, as has happened to the Scottish super district Caledonia Reds and the Welsh region Celtic Warriors, and more recently Border Reivers. This attitude towards rugby in Connacht have provided much aggravation to the teams supporters who consider Connacht Rugbys underfunding and lack of resources debilitating and wholly unfair.

However, despite the threat of closure in the past and the lack of equality of funding, the province has acquitted itself well in all competition and has excelled in the European Challenge Cup in which it has reached two semi-finals and a quarter-final in the last three seasons. This season has seen a change for the better in regards to squad strengthening, with prominent players for the first time returning to the club to fight for Ireland selection and a promotion to the Heineken Cup for the Connacht Rugby team.

The historical home of Connacht Rugby since the late 1920s, the Galway Sportsground (or "the Sportsground" as it's known locally) is also well known as a charmingly spartan and inhospitable venue for many visiting teams especially in the depth of and Irish winter. In an age of gleaming Cathedrals of Sport and despite some modst development the Sportsground harks back to a era before professional Rugby. As the ground itself is actually owned by a third party "The Galway Agricultural & Sports Society Ltd." and leased to both Connacht Rugby & the Irish Greyhound Bord. Due primarily to this issue the development of the ground has over the years lagged some way behind the home grounds of the other Irish provinces, who with the IRFU's benevolence have forged ahead in implementing modern facilities for both visiting teams, corporate guests and Supporters alike and benefitting financially from the increased revenue streams. This extra revenue has allowed them to recruit blue chip players from abroad further boosting attendances and widening the gap between the other provinces and Connacht...

Connacht Rugby will participate in European Rugby's blue riband competition the Heineken Cup in season 2011-2012. This has spurred a new phase of development[3] at the Sportsground to extend formal capacity to 7,500 supporters.

With the existing Clubhouse terrace being knocked down to be replaced by a covered Terrace which will be called "the Clan Terrace". This terrace will primarily house season ticket holders/Supporters Club members. This is the first stage of development on the Clubhouse side of the ground as the Clan Terrace is scheduled to be repalced itself by a stand when funds to do so are in place.

There is also ancillary work being undertaken behind the terrace which will see the construction of a new marquee bar, food outlets and restroom facilities on the Clubhouse side of the ground.

The second part of the development will be the erection of a covered, seated "West Stand", adjacent to the existing main stand. This stand will cater for over 300 supporters in a structure that will be similar to that which was in place for Connacht’s Amlin Challenge Cup semi final against Toulon in 2010. The new West Stand, along with the developments on the new Clan side are anticipated to greatly improve overall facilities within the Sportsground and help make the home of Connacht Rugby a fun, safe and enjoyable venue for years to come. 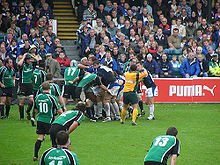 The eagle and sword arm crest used by Connacht are said to have been granted to Ruaidhri Ua Conchobhair King of Connacht by the Schottenkloster or Irish monastery founded in Regensburg, Bavaria in the 11th century.

The current kit consists of a green shirt with black trimming, black shorts and black socks with green trimming. The away kit is all black.

Strangely the traditional colours of the Connacht province and flag are blue, black and white with no green present, the reasons for its presence on the Connacht Rugby kit are unknown as it not used on underage teams who wear a blue and white/black kit matching the flag.

The kit is manufactured and supplied by Rugbytech (a division of Irish sports store chain Elverys), and the main shirt sponsors are Mazda.