Makunouchi
For the protagonist of Fighting Spirit (Hajime no Ippo), see Ippo Makunouchi. For the top division in sumo, see Makuuchi. 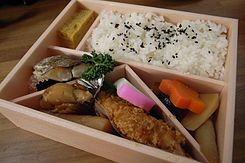 Makunouchi (幕の内?) is a popular type of Japanese bento which consists of fish, meat, pickles, eggs and vegetables along with rice and an umeboshi. There are also other kinds such as a chestnut-rice, sweetfish sushi and meat-and-rice-casserole forms.

The word makuno-uchi bentō ("between-act bento"), dates back to the Edo Period (1603 to 1867), when they were served during the intermissions (幕間) of Noh and Kabuki theater performances.

From the Meiji Period onward, Makunouchi has become a common convention for bentos sold at train stations. Convenience stores usually also sell a bento under the Makunouchi name. Though the selection and number of items in a Makunouchi bento vary from store to store, it often contains more items and costs more than other offerings.