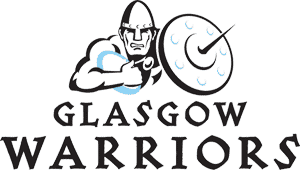 Glasgow Rugby were created to compete in the as the SRU did not think that Scottish club sides could compete against the best teams from France and England. Glasgow, however, did not compete in the until the 1997-98 season.

Due to the SRU's high debt, partly as a result of the redevelopment of Murrayfield - called for retrenchment. After two seasons, Glasgow merged with the to form a team to be known as Glasgow Caledonian. From the 2002-03 season the Caledonian label was dropped and the team were simply known as Glasgow Rugby. Starting with the 2005-06 season, the team were yet again rebranded as the Glasgow Warriors.

The enforced merger came just after Glasgow had shown some signs of progress by qualifying for the quarter-final play-offs, in which they lost heavily (90-19) to . The combined strength of the new teams was supposed to build on such modest progress, but it did not happen.

The issue of crowd sizes returned at the 1999 World Cup, by which time a Welsh/Scottish League had been established - essentially the Welsh First Division with the two Scottish sides tagged on.

The Celtic League, begun in the autumn of 2001, has been a more attractive competition for players and public alike. Glasgow reached the semi-finals of the inaugural competition but have struggled since. In 2004-5 they were fifth, the best of the three Scottish teams.

After impressive preseason displays, Glasgow Warriors kicked off in the new Celtic League against and suffered an agonising (23-24) loss after a last minute penalty.

However Glasgow would bounce back, and didn't lose another home game until Ulster came to Hughenden in January 2007. Glasgow played well away to English side Saracens in the , and drew with them at home en-route to a Quarter-Final berth. But in that Quarter-final they were once again drawn with Saracens, and despite a fantastic display they lost out 23-19 at .

However, the Warriors continued their good run at Hughenden, beating both Scottish rivals just a week apart - Edinburgh and Border Reivers, and at the start of April title hopefuls Leinster arrived at Hughenden. Glasgow put in a fantastic performance to win the game (26-20), before following it up with a good away win against Irish side Connacht. Their next game saw them travel to Ravenhill to face Ulster - one of 2 sides to beat them at Hughenden, and they stunned the home crowd by winning the game.

Then it was the turn of Welsh side, the (a side that would win the title at Netherdale the following week) to travel to Hughenden. Ospreys crossed the Glasgow try-line within 45 seconds, and crossed twice more to take a (26-9) lead just minutes from half-time, before Glasgow's converted his own try to take it to 26-16 at half time. In the second half, Parks kicked another penalty before setting up for a try, which he converted to level the scores. Parks kicked a penalty from just shy of half way to take a 3 point lead, but Ospreys couldn't find a way out of their own half for the remaining 20 minutes.

The Warriors failed to make it 5 in a row the following week, but coach was happy with his team's performance over the season none-the-less.